Columnists vs burger babies: And the winner is… 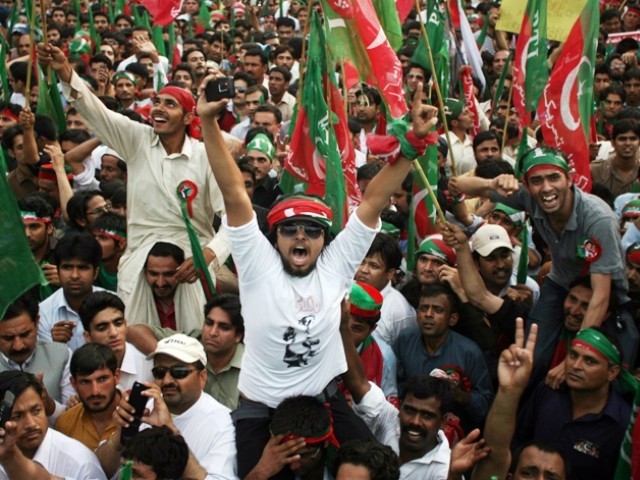 What people fail to realise is that in their sweeping, over generalised judgments, they had closed their eyes. PHOTO: AFP/FILE

Imran Khan and the PTI’s ‘tsunami’ are both ever present in today’s online, print and social media society in Pakistan. Views vary but it is two groups in particular that I will speak about in my post today.

On one hand, you have Pakistan’s regular columnists who heavily criticise the Tehreek-e-Insaf, and on the other, you have PTI Facebook fans and Twitterati – the newly politicised urban youth or famously titled ‘burger-baby revolutionaries’ that support and defend the party.

I don’t want to generalise, so just to be clear when I say columnists, it includes a newspaper regular who has criticised the PTI in some capacity, and when I say burger-baby, it includes the young, well-educated upper-class PTI supporter who isn’t a ‘troll’.

Getting back to the point then, who is winning the argument? Who understands the PTI better?

As a person who has been supporting the party for a good six years, I feel like the columnists are a little off the mark.

In 2011, Mosharraf Zaidi criticised Imran Khan for not having a team and termed his political influence in Pakistan as barely anything. Later, the same year, George Fulton criticised Imran Khan for not being able to attract any political talent and being an egoistic one-man-show. And yet, before the very same year ended, a headline in this newspaper read, ‘Imran’s Dream Team wows Karachi’.

In June last year, Fasi Zaka complained that Khan was riding on anti-Americanism and was the only person that ‘treats the Taliban as a legitimate entity that has tangible demands that can be accommodated with negotiations.’

Imran Khan’s view is to talk to all groups; to separate retaliating Pashtuns from real militants, who would then be eliminated. He has repeatedly said that no militant group or any group that wants to impose a theocracy on the tip of a sword will be allowed to operate in Pakistan under any condition. The tangible demands, he says, are of the tribal locals reacting against violence initiated by America and its allies.

In the later All Party’s Conference, regarding the war in the tribal areas, all parties agreed to start negotiations with the tribal people and ‘give peace a chance’. The view is also somewhat shared by elements in Washington, many of whom have come out and said that they would not be against Imran becoming the prime minister of Pakistan.

Before the October 30, 2011 rally in Lahore, a major criticism faced by the PTI, was that the majority of its support was on Facebook and from sit-on-the-couch ‘burger-babies’. Feisal Naqvi called Zohair Toru ‘fantastically ignorant’, further stating that any revolution depending on people of the likes of him would be a long time coming.

Knowing Toru personally, from our time in school together, I can say he is far from ignorant, and most would agree that the ‘inqalaab’ he was talking about has come a long way from the infamous ‘garmi mein kharaab’ video. He obviously had more faith in the party than the critics and columnists who have had to eat their words.

But what people fail to realise is that in their sweeping, over generalised judgments, they had closed their eyes. When the PTI woke the youth of the elite class up and politicised it, it wasn’t the party’s only step; it was the party’s last step.

For the elite youngsters in Pakistan, the state of the country barely affects their living. To invoke a sense of responsibility, patriotism and revolutionary passion in this part of society was the real sign of victory. It is easier to reach out to the poor and weak who have been deprived because of the declining state of the country. Not easy – just easier. But if you have gone as far as to affect the affluent urban youth, it can only mean the message you are carrying has something unique that strikes a chord.

Since 2007, I have been witnessing a movement of epic proportions. I have literally seen Pakistan change before my eyes. My driver – whose village elders hurt those not voting for the PPP – today says the entire community is with the PTI.

Rikshaw drivers, tailors, gardeners, labourers, lawyers, engineers, students, doctors, artists, overseas Pakistanis – I have interacted and spoken to people from all walks of life and learnt that the vast majority support the PTI today.

In an article, a couple of months ago, something I had never witnessed before happened; Saroop Ijaz called Imran Khan a liar and questioned whether he was even genuine in his cause. This is where the critics lose the battle. There was no argument to back up the premise. It just didn’t exist.

Imran Khan, through his life and his message, teaches us to be idealists and that is why he is who he is today; that is why so many years of supporting the PTI are bearing fruit. In the latest International Republican Institute (IRI) survey, the Pakistan Tehreek-i-Insaf is the most popular party in Pakistan.

I got to spend 30 minutes at the, August 13, 2011 Tehreek-e-Insaf rally in Islamabad, which was a few hours before my flight to Chicago, and during those few moments, I was convinced for good that change was inevitable.

This rally was not aired prominently on television.

Maybe if it was, the columnists would not have been so shocked on October 30,2011. The burger babies certainly were not.