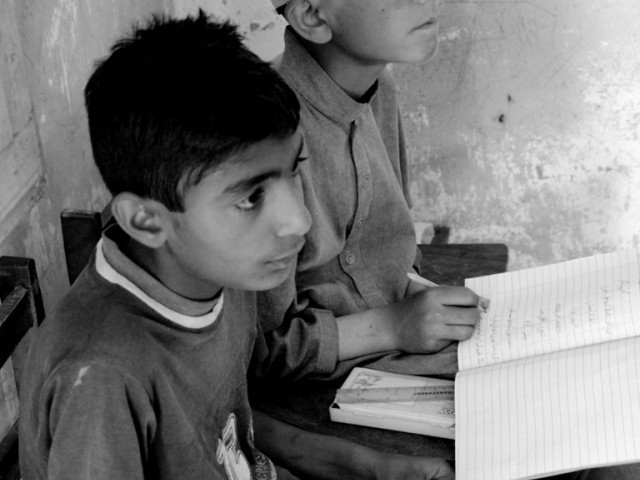 Children who have good teachers will all do well, regardless of whether they belong to poor or affluent backgrounds. PHOTO: FARAH J KHAN

Would forcing government servants to send their children to public schools help improve the quality of education? While such a populist measure seems well intentioned and simple enough, it betrays our continued ignorance of how education works or at least how it should work.

Now don’t get me wrong. I strongly believe that state schools need to be expanded and improved. I believe that schools should be palaces. However, the factors that contribute most to improving the quality of education, measured in terms of examination performance include, the quality of teachers, supportive parents and the financial standing of the student’s household.

In short, a good teacher coupled with parents who support their children’s learning via encouragement and raising aspirations, enable academic success regardless of whether the ‘school’ is under a tree or a brand new building.

Forcing bureaucrats to send their children to public schools would do little to alter the status quo of the factors above.

Second, it would actually contribute to making things worse. If our government servants are as corrupt, inefficient and ineffective as we are led to believe, they would find ways to insure that their kids are preferred over their peers.

Third, they are hundreds of thousands of government employees across the country. Who amongst them would be forced to send their children to public schools? Those at the top or those at the bottom of the pay scale?

Fourth, a long term effect of such a policy would be to discourage new entrants to the state bureaucracy.

Fifth, how would such rules be enforced?

In a country with many ghost schools, we would see the proliferation of ‘phantom students’. Names would appear on the school’s register for legal purposes, but students would simultaneously attend their parent’s preferred educational institution.

Sixth, it is questionable whether parents, who are not employed by the state, would be influenced by such laws.

Seventh, not all bureaucrats are equal. Resources will flow to the more powerful and trickle down to those who are at lower pay scales. Then what of all the public schools where no government servant sends his children? And what of the tens of millions of children who are not enrolled at school at all?

Finally, perhaps the biggest limitation of such a policy is that it would limit parental choice. Parents who are involved in their child’s education take an active interest and contribute to their child’s academic success. Any policy that could potentially harm parental involvement would do more damage than good.

Setting aside these shortcomings for a moment, let’s assume that such a policy is implemented, and all government employees are forced to send their children to public schools.

It’s the start of a new academic year, the sons and daughters of government clerks, army officers, police officials, municipal workers and so on arrive at their local state school. They are all exposed to the same teachers, the same environment, and the same infrastructure. Let’s also assume that the budget available for the coming academic year has been enhanced because the local Grade 21 officer’s children have also landed at this state school.

So would we now see improvements in academic performance?

Children who have good teachers will all do well, regardless of whether they belong to poor or affluent backgrounds. Poor teachers will remain poor educators, regardless of how much money is thrown their way. Once school ends, the children of the rich will go home and enjoy hearty nutritious meals. Their less affluent counterparts will go home to find that their dinner leaves them malnourished. Poor nourishment to a child child at age ten leaves him or her four years behind their well-nourished peers.

Children of affluent parents enjoy a more enabling home environment and over time, exposure to a variety of different experiences help build their aspirations. They have access to a range of leisure activities and the social connections that their parents enjoy help them secure internships and jobs once the time comes. For those from less affluent backgrounds, financial stress and limited social capital inhibit their ability to access opportunities from the onset.

My argument is simple.

We need a better understanding of the different factors that contribute to academic success. Enforced uniformity does not raise academic performance in isolation. If we want to address the sorry state of education in Pakistan, we must look at the process of learning both within and beyond the classroom.

Forcing government employees to send their children to public schools is a populist gesture; it would still fail to address many of the factors that contribute towards academic success. I would rather see limited financial resources and political capital allocated to widen access to opportunities for all, than implementing a populist measure, open to exploitation and abuse.