Education must not be ignored in the next budget 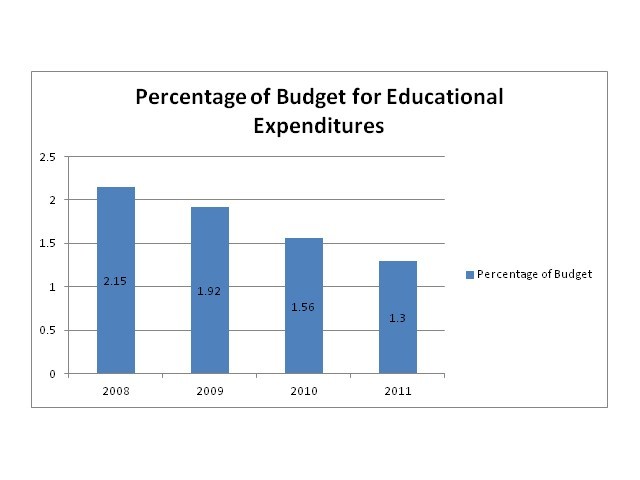 During the years 2009, 2010 and 2011, educational expenditures have decreased significantly. PHOTO: GULFAM MUSTAFA

Recently, Prime Minister Yousaf Raza Gilani announced the government’s top priorities for the next budget. Electricity and employment top the list. Although this is all good news, I would like to ask our premier, what about education?

Without a doubt, the electricity crisis is the most important issue Pakistan is facing right now. The country is suffering immeasurably due to shortage of electric power and our economic wheel has stopped. However, this issue is as old as our current government.

Four years have gone by, but our government has yet to take serious notice of the crisis. As elections are expected during the upcoming year, the ruling party wishes to get public support by utilising such strategies. Though it is too late, the public will warmly welcome any step taken towards ending their misery.

However, what greatly surprises me is how our prime minister has ignored education as a budget priority during his press releases. To me, this issue is the most pressing one the country is facing.

The current literacy rate of Pakistan is estimated to be 49.9% – reading and writing being the criteria. Pakistan ranks 185th out of 204 countries in terms of our literate population. Literacy among female members of our nation is a dismal 36%. Pakistan has been spending roughly around 2% of the budget on education. During the years 2009, 2010 and 2011, educational expenditures have decreased significantly.

During 2008, 2.15% of budget was fixed for educational expenditures. This amount decreased during the next three years and a similar signal has been passed by Prime Minister Gilani for this year’s budget too.

I don’t think anyone can deny the importance of education to the growth and development of a nation. However, the complacent attitude of our current government towards this issue is, indeed, troubling.

To achieve universal primary education was the second Millennium Development Goal which Pakistan promised the international community. Pakistan committed to raise its literacy rate to 88% by the year 2015 while ensuring 100% net primary enrolment ratio. 2015 is only three years away and we are still lagging far behind our goal. The current literacy rate of Pakistan is 49.9%, as mentioned above; this is still 38.1% short of our committed literacy rate.

Moreover, we have failed to ensure 100% net primary enrolment rate. This lies at a disappointing 52% according to a report by the World Bank. Despite huge foreign funds and in-land revenue, the country remains in the low human development category; Pakistan ranks 145 out of 187 countries in Human Development Index, 2011.

The government has launched various campaigns like Universal Primary Education and Universal Secondary Education. However, these campaigns are useless unless appropriate funds are allocated for educational expenditures.

There are many areas of Pakistan where children cannot access schools and no educational facilities available. Similarly, the quality of education at government-run schools in itself is a question mark. Many ghost schools exist in government records and nobody takes action despite knowledge about this.

Our government has taken no steps towards changing the mind-set of people in remote areas who consider education useless or even a threat to their ‘ghairat’.

Depriving girls of an education is a huge problem too, but it is ignored by the government. They have also failed to adequately train and develop teachers; corporal punishment remains a major reason behind the high rate of school-dropouts.

In the light of all above mentioned problems as well as the international commitments, our government must allocate an appropriate portion of budget towards educational development of the country.

The roots of education are bitter, but the fruit is sweet.

If we really want to feed of this sweet fruit in the form of a developed Pakistan, we must invest in the future of our children to turn them into great leaders, scientists, and valuable citizens.

If we continue to ignore the crucial issue of education during resource allocation, we will never be able to progress.

Editor of the Weekly Mission who tweets @egulfam

The US media's (biased) version of the NATO attack