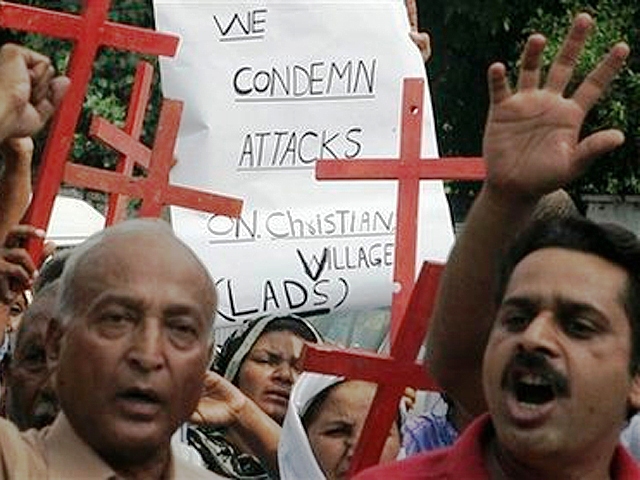 Upon Pakistan’s declaration as an Islamic republic, the rights of religious minorities, particularly Hindus, Christians, and Ahmadiyya, diminished.

The widow of Bantu Masih hurls her pet hens inside the cage as she prepares dinner. Her only son Bagga, a scavenger, will return sometime after a full day’s tedious labour. The family lives in a remote locality 65 km from Lahore. They had to shift here overnight, after an enraged crowd killed Bantu Masih, the sole breadwinner of the family, over alleged charges of blasphemy in court premises.

Analysts believe this is the worst form of human right violation and no government in Pakistan could get rid of this despicable use of the law, the seeds of which were sown in 1949 when Liaqat Ali Khan, the country’s first prime minister made it a preamble of the constitution. The Objectives Resolution passed by the first Constituent Assembly in 1949 including 280 Articles and six Schedules became its preamble. The power to amend the Constitution was contained in Article 239.

The country’s checkered history saw the 1956 and 1962 constitutions, but no government in Pakistan could dare to part ways with the controversial Objective Resolution which many believe to be in direct confrontation with the ideology of the Quaid-e-Azam who in his landmark address to the First Legislative Assembly said:

It is surprising as to why a staunch supporter of secularism like Bhutto could not do away with the controversial resolution while he is credited with giving a consensus document after 26 years of the country’s independence. Gen Zia cunningly used religion for his own nefarious designs. He exploited the sentiments of extremist segments in the name of religion when the former USSR invaded Afghanistan. Few believe that it was Pakistan’s war on any account. Sentiments of the public had been deliberately exploited in the name of religion with financial backing of the West.

“The Blasphemy Law is the culmination of the sojourn the nation set upon itself in 1949,” commented a senior human rights activist who requested anonymity. “Jinnah wanted to make Pakistan a secular state but the country lost direction following his untimely death. Upon Pakistan’s declaration as an Islamic republic, the rights of religious minorities, particularly Hindus, Christians, and Ahmadiyya, diminished. These minorities live under the fear of threat to their lives and property, desecration of their places of worship, and the Blasphemy Act that carries a penalty of death,” he observed.

The frenzied mob mentality and the knee-jerk reaction on the streets following a blasphemy charge is a real source of concern for human rights organisations of the country. “Trapping anyone in the vicious cobweb of blasphemy is the easiest job in Pakistan,” says an activist of human rights commission of Pakistan who wished to remain anonymous.

It was not that long ago when Gojra, a small city in the heartland of Punjab witnessed frenzied mob attacks on Christian neighbourhoods which killed nine. The attacks were triggered by reports of desecration of the Holy Quran. It was reported that Mukhtar Maseeh, Talib Maseeh and his son Imran Maseeh had desecrated the papers inscribed with Holy Quran verses at a wedding ceremony. Before the tragic attack in Gojra, mosques were used to make announcements provoking the attack. Locals were urged to “make mincemeat of the Christians” before Gojra. Similarly, in Daudnagar announcements were made from mosques asking people to come out to “fight rampaging” Christians.

On October 28, 2001 in Lahore, militants killed 15 Christians at a church, three weeks after the US-led War in Afghanistan to topple the Taliban. On September 25, 2002, unidentified gunmen shot dead seven people at a Christian charity in Karachi’s central business district. They entered the third-floor offices of the Institute for Peace and Justice (IPJ) and shot their victims in the head. All of the victims were Pakistani Christians.

In November 2005, hundreds of militants attacked Christians in Sangla Hill in the Punjab province and destroyed Roman Catholic, Salvation Army and United Presbyterian churches. The attack was over allegations of violation of blasphemy laws by a Pakistani Christian named Yousaf Masih.

In February 2006, churches and Christian schools were targeted in protests over the publications of the Jyllands-Posten cartoons in Denmark, leaving two elderly women injured and many homes and properties destroyed. A young Hindu labourer, a few months back, was beaten black and blue by his own colleagues in Karachi on the pretext that he used derogatory language against the Holy Prophet (PBUH). The victim died on the spot and his family could not dare to lodge a complaint in the local police station and the police arrested no one. The incident happened in broad day light at a construction site in Karachi. The heirs of the deceased disappeared from their native abode on the fear of further persecution by the locals

“We need a paradigm realignment of the country, unless Pakistani is declared a secular state there will not be any tangible development on human rights front” concludes Muneer Ahmad who is pursuing a master’s degree in History from a well recognized public sector university. According to Minority Rights Group International, Pakistan had the world’s highest increase of threats against minorities last year and was ranked the sixth most dangerous country for minorities overall. Pakistan was ranked after Somalia, Sudan, Afghanistan, Iraq, Burma and the Democratic Republic of the Congo.

A Punjab University graduate working with a public relations firm. After working for three years as an English Literature teacher at a private university he began work in a Pakistani think tank National Reconstruction Bureau as a media consultant. He writes on socio-political issues.

For those who have seen drone attacks