I am part of the Sialkot lynch mob 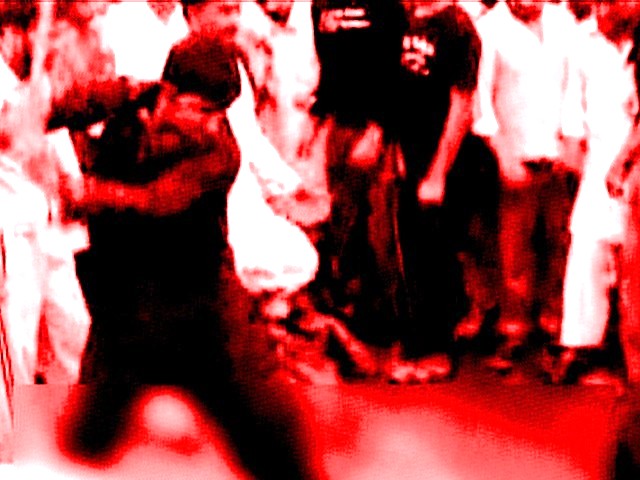 A crowd of onlookers watch a young boy get beaten to death.

The brutal two-hour long lynching of two young brothers in Sialkot at the hands of a mob, inclusive of policemen and children is so horrifying that it truly merits the questions some visitors to The Express Tribune website have been asking:

Are these people animals?

Is this the true face of a nation so despicable that even God has forsaken them?

While I do not believe in the latter argument, I can understand where such a profound sense of grim despair comes from. In a country afflicted with back-to-back political and civil strife, war, terrorism, poverty and natural disaster, violent extremism (in all forms) is bound to flourish, nay become an outlet for venting the utter helplessness individuals feel at a personal level. And none of us are immune to its effect.

Those two boys in Sialkot were sacrificed (murdered) in the name of this national burden, and in an act which is no different than the public beheadings the Taliban carry out. In both instances we ask ourselves the same questions:

Are they really Pakistani?

In the case of the Taliban, it has become easy to deny reality and answer no to all of the above. We can always turn to the process of dehumanisation, conspiracy theories, ethnic and racial prejudice or simply avoid the question and blame the system which perpetuates, prolongs and aggravates the problem i.e. the US War on Terror being fought on our soil. In such a scenario, we shrug off responsibility and blame either the US or the Taliban (our so-called political left and right stances) and relieve ourselves of the burden of examining the reality of the situation.

In the case of the Sialkot lynching, it is not as easy, because in such a scenario it becomes clear that we are our own enemy. However, the truly frightening aspect of this realization is not the acceptance of the fact that those boys beating their fellow human beings to a pulp are humans, Muslim and Pakistani – it is the far more serious question: if this is our true reflection, what is to be done?

The simplest solution and the most superficial is to pinpoint an enemy and punish them mercilessly in the hope that the problem will never rear its ugly head again. This is the defacto approach the US has taken with the Taliban and its equivalent is Supreme Court Chief Justice Iftikhar Muhammad Chaudhry’s edict demanding that the police be held accountable and that the culprits involved in the Sialkot lynching be arrested.

This is a necessary first step, but it is superficial because it does not address the totality of the problem, and if adopted in the long term, it turns into a farce. Just how many times will the Chief Justice have to take suo moto notice before we recognise that our champion of justice is carrying out near-futile ‘drone attacks’ against an enemy which is 170 million strong?

Yes, there have been thousands of opinion pieces generated from Pakistan which cite that ‘we are the problem’ but the message has not broken through the surface of our collective delusions yet. This is in part because the scale of the problem is seen in macro-level societal behavior (public lynching, beheadings, rape, murder, corruption and violence all-sorts) but springs from individual experience, beliefs and attitudes – and as we cannot relate to each individual (or various sections of our fragmented society), we distance ourselves from them by labelling them ‘evil’ or ‘the others’.

In order to address this problem, we can only plead to each other that a dialogue must begin to reshape our identity, and the first place it has to begin is within our own hearts and minds, where there is always a choice to be made – the one place we are not completely helpless, though we may sometimes feel that way.

Step two would be to turn our choices into action, and introduce change within all spheres, public and private. With holistic change in the thinking of an individual one can begin to hope for holistic change in society, and the strengthening of institutions will follow suit.

I will be the first to admit that I have made some terrible choices in my life, and I am part of the problem which results in a public lynching in my country, the violence perpetuated in the name of religion, the sad state of our education system, the ill treatment of women and minorities. It is not easy to see (or admit to) how these are all linked to who I am, but they are. I am part of that mob in Sialkot.

Let us also not be burdened by the guilt, but build off of it, else all the dead bodies, all the suffering and even our act of realisation will have been in vain. Despair is easy, hate is easy, apathy is easy, but for the sake of two brothers in Sialkot, we should try to change by effectively addressing the corruption within us. It is either that, or stand alongside the mob to watch on.