So, a Christian can’t ‘save’ Pakistan? 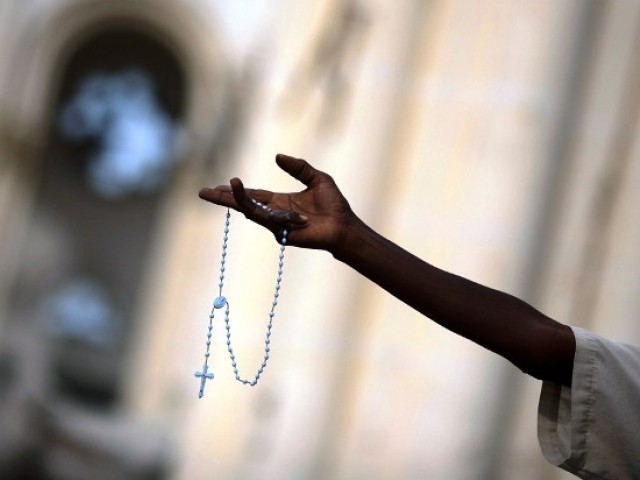 It is sad that Christians are being marginalised in their very own country; a country that they ardently love. PHOTO: REUTERS

Recently, I have come across many status updates on my timeline that really hit me deep. It is very common for me to see the following opinions pop up on my news feed:

(To save Pakistan, we need to become good Muslims.)

A legally recognised subject or national of a state or commonwealth, either native or naturalised.

However, I believe that many in Pakistan believe that the definition of the word ‘citizen’ is lacking the key word ‘Muslim’ in it. A Pakistani citizen to them is:

A  legally recognised Muslim subject or Muslim national of a state or commonwealth, either native or naturalised.

There seems to be no place for any one else.

When I question these statuses, asking about the very obvious exclusion of non-Muslims in Pakistan, I always get the same politically correct, diplomatic answer:

We are not talking about isolation, we respect minorities.

I don’t know about you, but excluding minorities so blatantly does not sound like ‘respecting minorities’ to me.

I was going through the statistics in a survey conducted by Christian religious leaders in 1978. This had acquired data related to birth and death rates from priests present at different locations in Pakistan. It also included all marriages registered with the church.

Interestingly, being a social media expert, looking at these numbers, I decided to do a little research to check just how many Pakistani’s in total were active on Facebook, and amongst these, how many were Christian Pakistanis.

The total number of Pakistanis on Facebook rounded up at approximately 6,423,800 of which there were approximately 114,060 Christians. Within my own list of Facebook friends, I noticed a handful, maybe more, of Pakistani Christians who have not disclosed their religious beliefs on their Facebook account; had these numbers been added, there would be a noticeable change in the number of Christian Pakistani users on Facebook. Using the numbers depicted in the statistics, Christian Pakistanis still make 1.77% of the traffic maintained by Pakistani users.

Taking all the data into account, we can sum up a statistical deduction that every Pakistanis profile on Facebook will have at least three Christian friends in a list of 200 friends. Those of us who boast over 2000 friends or more can have up to 30 Christians Pakistanis on their profile.

It is sad that Christians are being marginalised in their very own country; a country that they ardently love.

Many schools and hospitals belonging to Christians during independence served the community in an absolutely uncompromising manner. They served without ever looking at religion, culture, cast or creed. My own family members have been volunteers at hospitals, near a place now known as Bab-e-Azadi, in Lahore, where the very first train from India reached Pakistan.

There are many others, like my father, who took an oath, not on the Holy Quran but the Holy Bible, to protect their country and joined the armed forces, to defend their motherland from all evil.

We shall, however, be careful when we share our views on a social media platform about saving Pakistan or being Pakistani, because to save Pakistan, we have to be Muslim, don’t we?

In my opinion to save Pakistan we have to be a nation; a nation united in their patriotism and a strong sense of connection to the motherland. This feeling can only develop when we put our differences aside and recognise the fact that we are all fighting for a common goal.

Of all the things that inspired me write this article, this tweet by a friend was the biggest push:

@Rai_Azlan the debate of are you Muslim first or Pakistani first is just like “do you love your mother more or your wife”.

An enthusiast and a volunteer who would go beyond conventions to make things work.Rohan tweets @RohanD87

When did religion become a tool for violence?

The Christians of Pakistan mean nothing to the pope