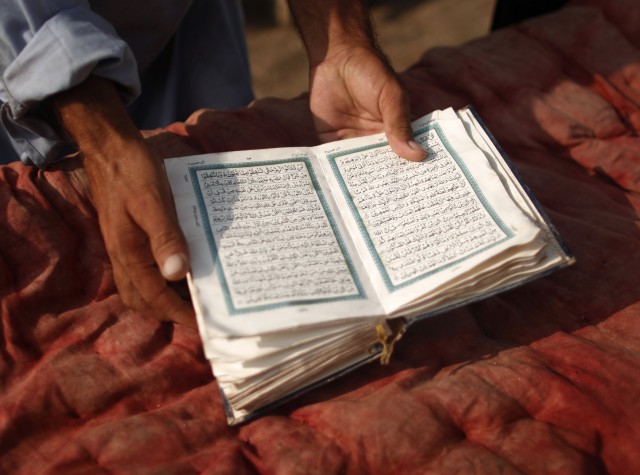 The Holy Book of Islam has been disrespected by non-Muslims for ages. PHOTO: REUTERS

I heard about ‘International Burn a Quran Day’ through Facebook, as invitations to join  pages against the event kept coming in. The first thought that occurred to me was ‘Oh no – here we go again!’

Yes, it’s not the first time that the Holy Book of Islam is being disrespected by non-Muslims. During the post-9/11 ‘War Against Terror’ campaigns in Afghanistan and Iraq, non-Muslim soldiers burnt and flushed Quranic scripts, to make Muslim prisoners angry and force them to retaliate or get a reaction out of them, find a reason to beat the prisoner up. It was also an insulting act, tragic for a holy book of any religion to get burnt and disrespected in front of its follower.

After the 9/11 attacks, the Council of American-Islamic Relations has been distributing thousands of copies of the Holy Quran amongst the local Muslims and non-Muslims. This year, as per a New York Times’ report, CAIR  a group of activists who are pro-Islam, even wishes to present a copy of the Quran to President Obama as a gift for his speech during an exclusive Muslim dinner at the White House.

On the other hand, there is a group of activists working as a church against everything that they consider is against Christianity. It is a non-denominational church, that gives you reasons to burn the text, one of which is that the   Holy Quran does not say Jesus is the son of God. This is, of course the major difference between the two religions, otherwise Islam could have been another denomination of Christianity.

In short, the Holy Quran has been a victim of anti-Muslims all along and in this case they burn it and humiliate it.

We as Muslims must protest against the anti-Muslims.

I consider events like the international burn a Quran day or drawing sketches of the Holy Prophet Muhammad (PBUH) as a menace between religions and a cheap publicity stunt by those who want to be in the news. All I know is that according to Muslim belief, Allah has ordered protection of the Holy Quran. I am saying that we should protest, but we should also not consider Christian communities around the world as people working against Muslims and Islam all the time.

Protests should be peaceful, maybe like the ones on Facebook. We should not make the same mistake that was made after 9/11 attacks, because of a single group, a whole religion was made a victim of a terrible never ending war. This was wrong and cannot be mended easily.

A junior copywriter for an advertising agency in Karachi. Tehreem also freelances for South Asia Magazine.

RGST: Another cross from the public to bear

A little prayer for the Pakistan cricket team