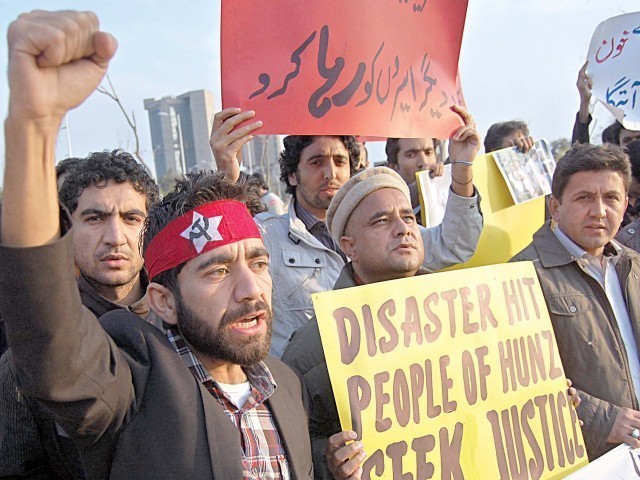 Baba Jan's story is not told in mainstream media but has slowly gained attention due to a concerted effort by activist groups. PHOTO: MUHAMMAD JAVAID

About a month ago, Prime Minister Yousaf Raza Gilani told the world that there are no political prisoners in Pakistan. But allow me to bring to notice the case of a political prisoner who is close to me and one whom our government repeatedly tries to silence. His name is Baba Jan Hunzai. He is an activist for the Labour Party Pakistan and a leader of the Progressive Youth Front.

Baba Jan, along with four fellow activists, spent the greater part of last year languishing inside various jails throughout Gilgit-Baltistan (G-B). His story is not told in mainstream media but has slowly gained attention due to a concerted effort by activist groups on global and local levels.

In January 2010, when landslide debris blocked the flow of the Hunza River, thousands of people were displaced and over 25,000 were cut off from the country due to the sudden formation of a lake, now known as Attabad Lake. As the affected people protested the negligence of the state authorities, the government offered stipends to displaced residents. However, because over 100 of the 457 families did not receive any compensation, allegations of nepotism and favouritism swirled.

On August 11, around 200 residents carried out protests and it was during this period that the first reports of police aggression against protesters came to light. A 22-year-old protester, Afzal Baig, was killed alongside his father, Sherullah Baig, who also died while trying to retrieve his son’s body.

In the ensuing chaos and outpouring of public anger, Baba Jan later arrived to organise and direct the protests. Following assurances from the authorities, people refrained from further demonstrations.

But a week later, the authorities arrested Baba Jan and many other protesters and since then, Baba Jan, who is booked under section 780-A of the Anti-Terrorism Act (ATA), has been subjected to cruel torture and unbearable conditions in prison.

In the backdrop of this case is the growing trend in which the ATA is specifically being used to target labour leaders and political activists. This has led to a deplorable situation where people campaigning for social justice are subject to counter-terror laws while militants committing heinous crimes roam free.

The government should release Baba Jan and other political prisoners if its efforts to democratise the state and society are to succeed.