Bash thy army the right way 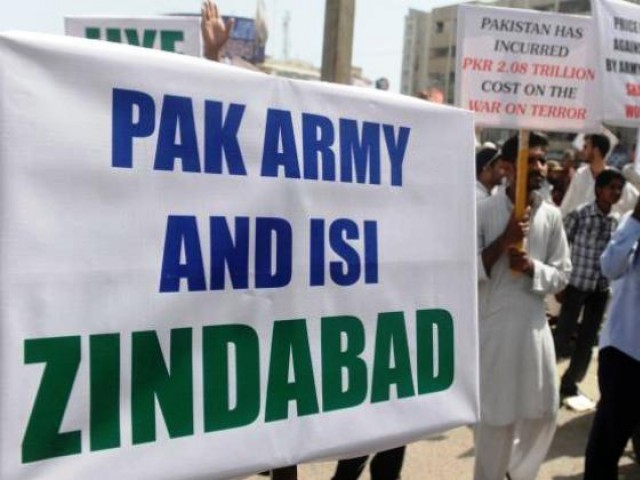 A large section of the population relates patriotism with the military, for good or for bad. PHOTO: AFP

Bashing the military is a favourite past time of the ones who feel they have been enlightened. Following this trend, an increasing number of people want to join this enlightened group, so they have taken to bashing the army too. The tool is a laptop; the location is a cosy house in Defence.

The new army bashers however, in my humble view, need to know a thing or two before launching into a gallant bayonet charge. So I have decided to help them out and will now try to explain how to effectively bash the malicious military, or how to do it ineffectively.

Props to my dear mentor Nadeem F Paracha (NFP); for the master is once again a step ahead of the pupil. He knows the young ones need guidance, so he recently demonstrated over Twitter, how ‘not’ to bash the military, with a reference to Bhoja Air.

Nadeem F. Paracha‏
We have latest fighter jets for the military, but rickety 27-yr-old passenger planes for the people. Doesn’t sound right.

The rickety 27-year-old passenger plane that went down did not belong to the PIA; it belonged to a private company, so the comparison with the military jets does seem ridiculous. They don’t have the same source of investment. On the flip side, the latest military jets also do crash and there have been multiple instances in the current year already.

In any case, Pakistan is doling out billions to the national air carrier.

NFP knows all of this, probably better than I do.

Let’s go through other how-not-to bash routines first. Another wrong way of doing it wrong is stating incorrect, made-up figures.

So vehement had the propaganda been regarding the army’s share of the national budget that an army officer’s son once convinced me the military gets 60% of the annual budget. This misrepresentation then allows General Ashfaq Pervez Kayani to correct you with a smug look on his face. The share proposed in the next budget is 20%, although The Express Tribune will compare it with the 2% for education and not with the many percents allocated for loan repayments to our foreign benefactors.

One more thing I have noticed is the overzealous criticism of the military by some of its main beneficiaries.

Yes, I am looking at you; supporters of the sher. Without any political achievements to boast about, certain people and their supporters have decided to just spout nonsense in this regard. It’s probably because they believe everyone has magically forgotten the identity of General Ziaul Haq’s chief minister in Punjab. Or perhaps they don’t know whom chotay Mian Sahab came to meet in Rawalpindi the night before the Long March.

Going back to NFP, the point he was obviously trying to make is that bashing for the sake of it seems stupid.

In fact, these are all examples of partisan bashing and people are able to see through them now. Therefore, all they do is harm the good cause. A large section of the population relates patriotism with the military, for good or for bad.

With the unwarranted, shallow and often baseless criticism of the institution, enlightened ones continue to alienate those who might otherwise realise that the army has transgressed on many occasions.

There was much momentum gained to this end in the last few years of Musharraf, momentum that could have been harnessed to effectively curb the influence of our establishment. The shenanigans of the political elite, however, have slowly eroded that momentum.

Whose fault is that?

An argument I had grown tired of hearing, was that our political class are helpless in front of the army. Memo-gate, however, showed us otherwise. To protect one of their own, they can stare down the combined might of the military and the judiciary, and seem to be helpless only when rights violations are committed against people whose votes don’t matter?

In a democratic country, the onus should be on the political class to take the lead in tackling all issues. Questions are to be asked of them, and they have to provide the answers. Try doing that in Pakistan and you will get ridiculed by a section of the press who believes the military is responsible for all evil.

Well, even if it is, ask the people you voted for to do something about it. How do the military’s mistakes exempt those in power? It’s really the most amazing, awesome logic ever crafted.

The irony is that the politicians they are trying to protect are the same ones who have benefited from the military in the past and continue to do so in the present. The relationship works both ways – appointing the Air Chief Marshal as Managing Director of the PIA is just another example.

It is also a fact that the chief of army staff is not appointed through a general vote, nor is the head of the ISI. Directly, the people cannot hold them accountable. So at the end of the day, only you and I can vote people into parliament and it is up to them to take the military to task.

Bypassing the government seemed logical when a serving army chief was also the president. He is not anymore; Bhutto’s spiritual son has taken over. Wake up and ask him to settle matters with the man who gave him the National Reconciliation Ordinance.