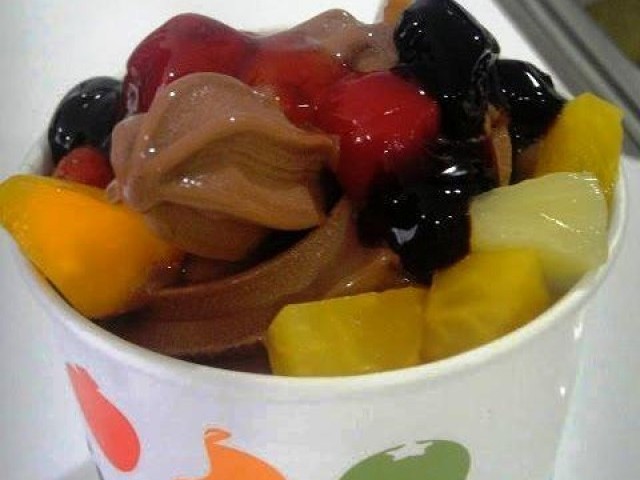 Given my ardent love for frozen yoghurt, when Food Connection Pakistan sent me an invite to a bloggers meet-up as a pre-launch for Tutti Frutti Frozen Yogurt’s first outlet in Karachi, I just couldn’t resist going.

This first outlet, which was scheduled to open on the May 9, 2012, is located on Zamzama (again), and another one will be opening its doors soon near BBQ Tonite. The master franchise is owned by a young man named Salman Niazi who hails from Los Angeles.

Tutti Frutti Frozen Yogurt (TFFY) has been operating successfully for quite some time in Punjab. An interesting piece of information for me was that TFFY has outlets at Bhera, on the motorway between Lahore and Islamabad on both tracks! Niazi says that this was basically a marketing gimmick to spread the word.

TFFY also has a presence in Faisalabad and now it aims to capture the gigantic Karachi market with its ambitious plans.

Judging from the marketing strategy and the product offering, it is evident that TFFY will be tough competition for other froyo (frozen yoghurt) joints. For starters, in comparison to their market competitors, these guys have got a lot of things just right to appeal to the masses.

For example, they are the only self-service outlet – which on its own lends a lot of fun to the froyo experience.

One just has to select a tub out of the four sizes available and fill it up with flavours and toppings to your heart’s delight!

The price charged is Rs1 per gram, so you simply weigh your tub and that’s that. I tell you, building one’s own concoction can be quite liberating and delightful.

In my opinion, the pricing and value for money is simply unbeatable. At Rs28 per ounce, TFFY’s froyo is bound to be a more-than-occasional treat for those who fancy froyo.

Both categories have a broad array of flavours, and at any given time, the Zamzama outlet will offer eight of the nearly 40 available flavours. Four flavours; natural, chocolate, vanilla and blueberry are expected to be available all the time, while the remaining four will be rotated weekly.

The bloggers got to sample only two flavours: natural and death by chocolate. I actually liked both; natural was very tart and flavourful with a hint of sweetness, while death by chocolate was creamy, smooth and had a strong chocolate flavour with no yoghurty undertones.

I can’t wait to try out the more indulgent flavours like red velvet, cookies ‘n cream, and also the tangy pomegranate, melon sorbet and the owner’s recommended ‘taro’ flavour.

To add to the excitement, there are many toppings to choose from here. The dry ones include cookies, nuts, chocolate chips, marshmallows, sprinkles, M&Ms, Kit-Kat, Bounty, Twix bars, and what not!

As for the fruit, I was quite disappointed to find only canned fruits, all drenched in heavy syrups. However, I was assured that fresh fruit will be very much on offer once the store formally opens.

Some jams and preserves will also be offered as toppings.

Like all froyo places, TFFY also claims to be a fat-free and sugar-free indulgence. It is probiotic which strengthens the immune system, keeping a check on cholesterol and blood pressure.

According to Niazi, the flavours are imported from the parent company in California in powder and syrup form, and the yoghurt is made in-house, fresh every day.

I did notice though that the website individually lists ingredients of all their flavours and yoghurt powder is one of them.

Since I could taste a faint sweetness in the natural flavour, I did some more research, to satisfy my own curiosity, and it turns out that as per TFFY’s international website, sucrose, fructose and dextrose are pretty much present in every flavour.

Here is a link to a document from the website which enumerates the nutrition values for every flavour. These values are per fluid ounce. So as I always say, moderation is the key to retain health-related benefits. To a great extent, the frozen yoghurt stores bear the responsibility to educate their customers about the ingredients used so that they can make informed decisions.

I have accepted the fact that at the end of the day, froyo is an amazing dessert—and Tutti Frutti is serving it just right!

Who's the froyoest of them all?

Dear Google, you have failed me!