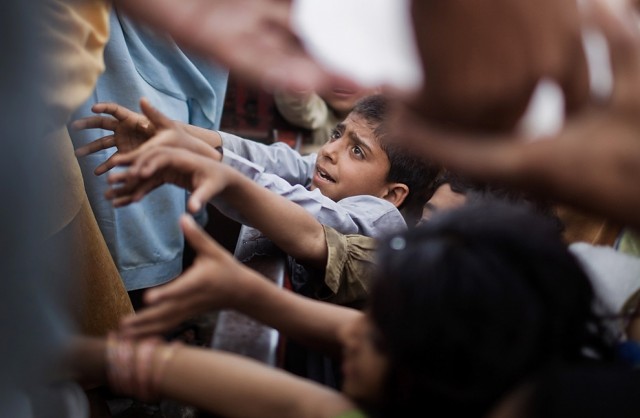 Many go hungry in Pakistan but do not beg. PHOTO: REUTERS

One morning, we went to a Halwa Puri shop to have breakfast along with a group of old friends. It was here that my eyes fell upon an old man sitting on a footpath nearby, completely lost in his thoughts.  I was trying to read him. He looked nervous as if he lacked something. He was quiet with his hands over his head deeply lost in thoughts.

Talha, one of my friends asked that old man if he needed something, “Baba Ji Purian Khayen ge?”

We managed to get him breakfast that morning but that incident never got off my mind. Every face has a story. Sometimes the story is the kind that makes you want to cry.

Many like that old Baba Ji move and sit around us, but we are unable to see them. In my 21 years of life, I have attended hundreds of weddings, and in those hundreds of weddings, I saw thousands of people wasting food, the food which could be life-saving for someone like Baba Ji. We live in a society that functions for people with money in their pockets, ignoring others who struggle for food.

We get aid from different countries to get rid of hunger, but often I wonder where does all the aid go? Instead of decreasing, hunger and poverty is increasing with each passing day. The World Bank has pledged $1.4 billion in aid and the Asian Development Bank has already released $500 million as the first tranche. And the US has pledged to arrange, through the World Food Program (WFP) and other UN agencies, approximately 11,000 metric tonnes of wheat for over 1.6 million Pakistanis, but the interesting thing is that, we still have close to 38 per cent of children in Pakistan who are either underweight or malnourished and around 36.2 per cent people who living below the poverty line. Primary enrollment of 5-9 years old children in Pakistan is the lowest in the region. Pakistan like many developing countries has been facing food shortages.

Food inflation soared beyond the control of the government on the one hand and food items went far beyond the access and affordability of the common man. The price hike during Ramazan has ignited social unrest in the country but the government response is more focused on complying with the donors demands rather than looking into the problem holistically.

Hunger is an important cause that is provoking crimes in our society. President Asif Ali Zardari unveiled a $450 million fund to support the poor in the form of the Benazir Income Support programme, but at this time 60 million Pakistani’s are facing food insecurity. According to the Washington-based International Food Policy Research Institute, levels of hunger in Pakistan are “alarming”, but instead of working on these most important domestic problems, our government is instead awaiting funds to wage a war against terrorism.

A society free of hunger will be a society free of crime. I shudder at times when I think that a representative of a mazdoor in parliament is living a luxurious life while that mazdoor still lives below poverty line. Our leaders are probably unaware of the fact that someday in God’s court they will have to provide answers for every person who slept hungry.