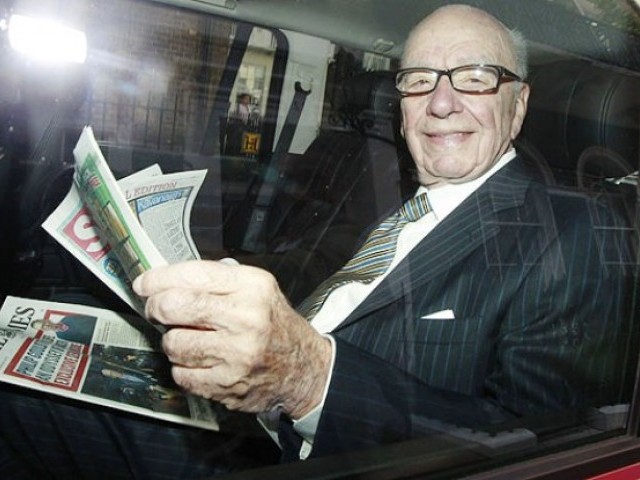 When talking about journalists, some may describe a journalist as always having news in his/her blood. However, when describing a media mogul like Rupert Murdoch, one may say owning news was always in his blood.

Inheriting a media company from his father, Murdoch went one step further and sought to build himself an empire quickly. Buying the News of the World, The Sun, The Times, etc, Murdoch then decided to create News Corporation,  News Corp, which is the second largest media corporation in the world today, located in New York. News Corp was established as a holding company – a company that does not have a direct purpose, only that of owning outstanding stocks of other companies. It is a publicly traded firm which owns Fox News, The Wall Street Journal and Twentieth-Century Fox.

With 800 companies under its belt, despite the British government’s hesitance to allow Murdoch to own or be a major stake holder in so many media outlets in Britain, the News Corp Empire seemed unstoppable, until the phone-hacking scandal came along.

After phone hacking evidence was used against News of the World (NOTW) in cases having to do with politicians, celebrities, and even murder investigations, NOTW was shut down. Since then a multitude of evidence has come out against News Corp employees in Britain and the United States. Pressured by the British Parliament and Congress, as well as News Corp employees being fired or stepping down, Rupert Murdoch continues to be under investigation into bribery and phone hacking.

Most recently, Jay Rockefeller, head of the Senate Commerce, Science and Transportation Committee wrote to British Judge Leveson overseeing media ethics to ask whether or not Mr Murdoch had broken any American laws. According to an article in The Guardian the committee is in charge of all broadcast communication and telecommunication, including cable TV in the United States. It also oversees the Federal Communication Commission (FCC) which issues broadcast licenses to all major networks. Therefore, American ethics groups have called on the FCC to revoke News Corps FOX broadcast licenses, all 27 of them, until the phone hacking scandal is cleared. Citizens for Responsibility and Ethics in Washington have asked the FCC to revoke the licenses on “grounds of character” after a UK ethics committee found Murdoch unfit to head an international company.

Here are the FCC regulations on ownership:

Under FCC regulations, broadcast frequencies can only be handed to firms run by people of good character who serve the public interest and speak with candour.

What surprises me is that Murdoch, after owning 800 companies and building an empire over decades has only now had his character called into question, not before when he bought up publications like NOTW, FOX News and other controversial publications and broadcast channels with extreme political undertones and biases.

Although I find it incredibly difficult to see how the FCC can judge “good character” and find it hypocritical to talk about media corporation representatives speaking with “candour” the FCC feels that they can judge these characteristics by taking into account previous conduct of media corporation owners, even including their actions that may have nothing to do with media.

According to the Fortune 500 list last year, the largest media corporations in the United States are The Walt Disney Company, News Corp, Time Warner, CBS Corporation and VIACOM. All these corporations own mass media communications from television to movies to internet all around the world.

Now, when one company owns mass media around the globe, it is not, in my opinion, in the interest of the public. Pushing a specific viewpoint when owning newspapers, radio stations, internet sites, etc, can get very easy very fast with so much access and so many avenues to relay information. As the world gets smaller with advancements in science, it also gets smaller because of merging companies creating dominating media frequencies.

Here is an excerpt from the FCC’s site on Newspaper/Broadcast Cross-Ownership:

Beginning in 1975, FCC rules banned cross-ownership by a single entity of a daily newspaper and television or radio broadcast station operating in the same local “market”. Under the 2007 revised rule, the FCC evaluates a proposed cross-ownership combination on a case-by-case basis to determine whether it would be in the public interest – specifically, whether it would promote competition, localism, and diversity.

To me, cross-ownership seems to do the exact opposite of what the FCC regulations want. It lessens competition and localism and certainly does not promote diversity. The only competition that is increased is between the corporations that own media outlets. While the corporation is growing, the various outlets it owns become smaller in their ideology of what news is and in their overall newsworthy outlook, even venturing into “non-news” worthy stories.

Something needs to change, but until then, as was once pointed out to me at a news network, we will remain to be “only as liberal as the corporation that owns us.”

A freelance journalist in Chicago, IL who tweets @ManalShakir1

Politicising homosexuality: A make or break for US presidents

Who is the real enemy in Afghanistan?

Afghan shooting rampage: When the solution became the problem

Iran, laughing in the face of nuclear disaster