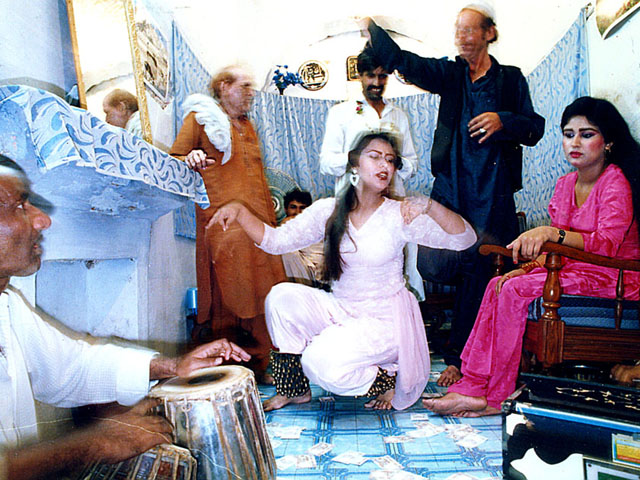 We mustn’t forget that there are humans living here and we should treat them as humans.

There is a bazaar in Taxali Gate called Heera Mandi. A few decades ago this place was famous for dancing and music. People used to go here for a visual and musical treat. Beautiful girls (kanjiries) used to sit in stall shaped balconies, called kothas, and ply their trade, the oldest profession in the world. The place was perhaps even more famous for singing and dancing. However, slowly the aesthetic pursuit became less arty and more tarty. The area became the centre of prostitution in Lahore.

Most people have the misconception that the Diamond Market got its because of the beautiful girls who worked there, inimitably like diamonds. However, that is not the real meaning or origin of the name. Actually this mandi is named after Heera Singh, who was the son of a minister of Ranjit Singh’s royal court. Heera Singh was also a minister of Sher Singh’s court during the Sikh period. The Mughals were the founders of that trend of dancing and singing, but as far as I know they never promoted prostitution publicly.

These brothel houses were first developed by the British in old Anarkali Bazaar for the recreation of the British soldiers. After that these were shifted to Lohari Gate and then to Taxali gate. They seemed to have spent more time at Taxali Gate than other places. Thus they settled in Heera Mandi, and one can still find the traces of that.

During the Zia era, a rigorous operation was conducted against these vendors of pleasure, because these ‘musicians’ were actually running brothel houses in the guise of music and dance. Of course, the operation didn’t root out this iniquity and instead it scattered all over the city.

Sinners and diamonds in the dark

There is a dark gali where every naughty boy considers going and every gentleman fears to go. We call it Sinner’s Street. Please don’t go there – not only is it sordid but it is dirty. When we were passing through the street there were prostitutes standing in the dark corners of that street calling customers. We saw two motorbike riders enter the street. They accosted a prostitute. She asked them where they had got the bike from. One of them replied, ‘I just lifted it. Now, it’s mine.’

This street is full of filth, with no proper sewerage system. It’s like you are walking in a drain. In a way it is the most poignant loss of heritage.

Once prostitutes were hired by wealthy families to teach their children culture and social behavior. All that is left of a colorful, gay street with music and the echo of ghoongros coming from carved wooden porticos are old prostitutes lurking in filthy corners, a rotten smell and drug addicts.

What was lost at Taxali Gate

This is only one part of the story. Taxali gate was not always famous for its brothel houses. Once nobles and historical figures used to live here. Mualana Altaf Hussain Haali and Allama Muhammad Iqbal were some eminent residents. Some noble people still live here like Moan Yousaf Salaud din, a renowned socialite and the grandson of Allama Muhammad Iqbal, in a beautiful and well preserved haveli, one of the finest examples of the architecture of the Mughal Dynasty.

Taxali gate also hosts the oldest cinema of Pakistan, “Pakistan Talkies” which was known as the Nazir Theatre before partition. Sadly, today it plays only adult films.

The gate, which is now known as the red light area, is the only opening of the Walled City to the West. It was once called Lakhi Gate. Behind this gate is the single arterial route of the Walled City which runs from East to West and connects Taxali Gate with Dehli Gate. Starting from the West this route is called the main bazaar of Taxali Gate. As we head east it connects with Kashmiri Bazaar which ends at Akbari Mandi.

Now, the ancient gate has vanished but the route still persists. It is believed that behind this gate, and close to the Lahore fort once lay, the royal Taxal mint – hence the name Taxali Gate. It was pulled down during the early years of the British regime. The name, however, remains.

Unfortunately, this area is no longer worth living in. We can imagine our authorities are more interested in monkey business here than civic amenities. In the same way as these women are outcasts in our society, it seems this place has also been cast off as well. Respectable people living here share this neglect.

We musn’t forget that there are humans living here and they should be treated with respect.

A television producer at Express 24/7

An iron gate to a city of dreams