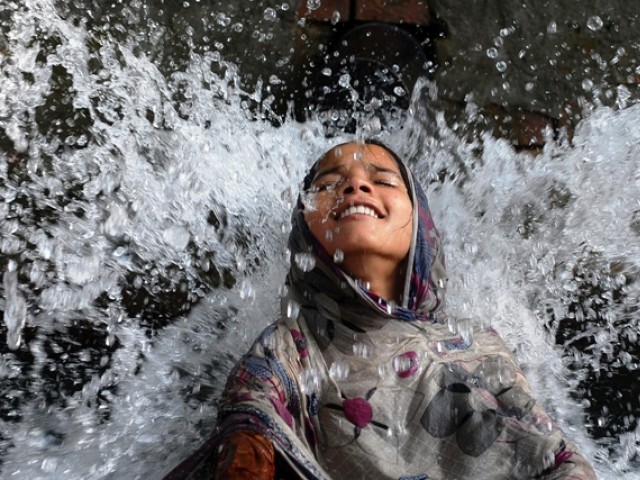 I would rather be the 99% than the 1%, any day, in Pakistan or any other place – if only I had the choice. PHOTO: AFP

When my husband and I moved to the US,  we knew that it wasn’t for good. Contrary to everybody’s assumptions, we knew that we were going to return to Pakistan, at some point in the meandering, distant future.

But we never imagined that it would be now, so suddenly, so unexpectedly, and under such sad circumstances.

As I sit here in the study of my in-laws’ house in Lahore this sunny April afternoon, looking out on a sumptuous garden decked with purple petunias, crimson lilies, snow-white roses and bright bougainvillea, listening to the chipper of birds and the low chatter of servants in the kitchen, New York seems like another planet – another time, another dimension, a past life that may or may not have even happened.

So many times we discussed this, our move back to Pakistan, my husband and I. Living in America, in a little 1-bedroom apartment complete with leaky faucets, mousey kitchens and batty landlords, independent for the first time, had unalterably changed us. While Occupy Wall Street was raging on in New York, we used to joke with each other about being the “covert Pakistani 1%” in the enthusiastic, indignant ranks of the “American 99%”.

“I hate the idea of being waited on by a troop of servants when I know I’m perfectly capable of doing their chores myself. I hate the idea of  living in a two-story, four-bedroom mansion while a whole family sleeps, eats, dresses in a single cramped ‘quarter’, dusting and sweeping a dozen rooms that nobody uses. I just could not live in such a disparate situation.”

It wasn’t just upper-class guilt and a stubborn sense of egalitarianism rearing its head. There was also something else – the beauty and indelible satisfaction of doing things yourself, of building your physical world with your own hands. Of chopping the garlic, peeling the onion, painting the wall, scrubbing the bathtub,  carrying a nice heavy bag of groceries upstairs to your apartment.

Sure, I complained about it sometimes, but I was secretly proud of it too. For somebody who had never even fried an egg by herself (for lack of need), the daily struggle was a revelation. It was something you shared with those around you. You felt a camaraderie with the people you rode on the subway with, the people who shopped at your neighbourhood grocery store, the cab drivers, the receptionists, the waiters at your favourite restaurant. No matter who they were or where they came from, you had something more meaningful in common with them than just the colour of your passport. Call it class blindness or class ignorance, I loved the feeling.

And, naively, I believed we could replicate that sense of camaraderie and egalitarianism with the ‘common man’, in Pakistan. That we could forge an alternative, healthier, more rewarding way of living, different from that of our class and our our parents; we could live in a smaller house or apartment, for starters. We could learn to take public buses, and walk to the bazaar instead of taking the car or sending the a servant. We were young – we didn’t need servants obsequiously lingering about all day to feed our lethargy. If we had money to spare, we could put a poor man or woman through school or a training course for a skill he or she had always wanted to learn instead. We could live comfortably, but simply, with less material things, less “luxuries”, fewer TVs and cars and expensive dinner sets. It was possible, I insisted. We could reinvent ourselves in Lahore too!

My husband was sceptical, realistic.

We are who we are in Pakistan – the privileged. And it’s pointless to try to be anything else, because that can’t change. We just have to do the best we can in the roles we’ve been given.

I didn’t agree. I believed every person had the power to change their situation, even if in a very small way.

But now that we’re actually back in Pakistan, all that seems like selfish banter, a pipe dream, wholly insignificant in the larger picture. Suddenly, we find ourselves thrown into roles, situations and relationships that we never envisioned, never planned, never wanted. We find ourselves perpetuating the status quo, the class consciousness we wanted to break. I feel the Lahore lethargy seeping into my life, my mind, slowly sapping the vigour and determination I felt before. I don’t want to walk to al Fatah any more, people will stare. I don’t want to take the public bus, it’ll be hot and uncomfortable. I don’t want to iron my own clothes, because I’d rather sit at the computer or read a book or take a nap; besides, that’s what the maid is there for…right?

I often wish I was immune, the way people are, to the unpalatable realities we live with in Pakistan. I wish I could authoritatively give orders to the servants like they’re used to, shoo away that pesky beggar like she’s used to, tip the al Fatah boy with a crumpled Rs20 note because you have to give something, gloat over the few hundred rupees you “saved” from the cloth merchant because you always get a bargain – I wish I could occupy the upper-class woman’s “role” with ease and flair,  but if after 22 plus years of living in Pakistan I’m still not able to do it without extreme discomfort , will I ever be?

That’s not me. And I don’t want to be that person. I don’t want that “power”, that patronising, suffocating power, and the guilt that comes with it.

Perhaps it’s impossible after all, to create that kind of life in Pakistan – the kind of life we had in America. For all its problems and its flaws, life there taught us not to take even the basics for granted. It taught us the value of hard work and instilled in us a sense of equality and humanity we had never experienced in Pakistan – a kind of class blindness. We could live in any sort of neighbourhood we chose, make friends with anyone we wanted, eat and shop where we liked, do any kind of job; and there was no judgment, no binding social norms and family legacies to contend with.

It’s true that there will always be someone who is less privileged than you. But the divide need not be so wide, so unjust, so tragic it makes you want to cry, if you only think for a moment about the difference between you and the man who cooks for you in the heat of the kitchen all day. I would rather be the 99% than the 1%, any day, in Pakistan or any other place – if only I had the choice.