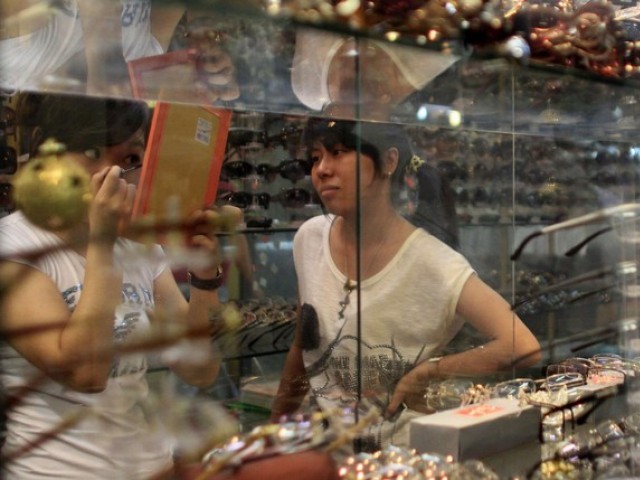 Don’t hesitate in giving your lowest offer while shopping; the Chinese sales girls might mind if you do not indulge in bargaining. PHOTO: REUTERS

Their rapid economic growth and resultant prosperity aside, the Chinese maintain their distinction in many ways. They call it “Chinese characteristics”- a term often used by their officials during briefings to foreigners.

During official briefings, you will hear the words “Chinese characteristics” associated with “political system”, “legal system” and “‘economic system” – all this distinguishes this emerging superpower from the rest of the world.

When it comes to communicating with foreigners in the English language, the Chinese have their own version – they call it Chinglish.

During a recent visit to China, our communication with the common people involved several rounds of charades. Part of these were some typically English sentences delivered in incorrect grammar that almost every sales girl offers to visitors while they bargain in Beijing’s markets.

If you visit, be ready to hear some strange English phrases at official functions; a high official may raise his glass to drink a toast and say,

Up your bottoms, please!

While this did not happen to the Pakistani delegation that I was a part of during my visit, such comical incidents are very common.

We were lucky enough to have humorous experiences with Chinglish. At the hotel in Yinchuan, the largest city of Western province Ningxia, the guests were cautioned about the wet floor with a prominently written warning that said  “Be slippery”.

Among the amenities provided at a four star hotel in the eastern Jiangsu province’s capital (Nanjing) were “soap bath” and “shampoo bath”.

On a different note, my sincere advice to travelers visiting areas less frequented by foreigners is to keep some cutlery handy if they are not good with chopsticks. Our hosts at a local restaurant had to purchase a new set of spoons, knives and forks from the market for us during lunch. According to the hotel management, we were the first visitors who could not use the traditional chopsticks for eating a meal.

Today, China is the world’s biggest and most lucrative market for the automobile industry. The burgeoning middle and upper middle class are eager to buy modern cars and sports utility vehicles (SUVs), while dozens of local and foreign brands are involved in an intense competition to gain the maximum market share.

A manual with an automobile reads,

To enjoy a more safe and pleasurable driving, firstly be familiarity with manual must carry on before driving

A manual provided with a toy helicopter starts its safety precaution segment with,

Please according to the manuals order to proceeding operation,

(Please proceed according to manual)

Do not fly this device with very airy spaces

(Do not fly in strong wind)

When it comes to shopping tips, I can safely advise that you start your bargain with around 10% of the price demanded by the salesperson – young attractive sales girls in the case of China.

Don’t hesitate or feel bad about giving your lowest offer; these sales girls get offended if you do not bargain. Amid some typically emotional sentences like “We friends” or “I am making friends”, you may hear another emotionally charged phrase when you will try harder to bargain.

You killing me (by giving such a low offer)

However, don’t get emotional here; if you show some callousness they will ultimately settle between 10-20% of the price they initially demanded. Pretend that you aren’t in a hurry and you don’t need the product too badly; you are just there to window shop. That’s exactly what we do with our Pashtun vendors, so for Pakistanis it is not so unusual.

Believe me, one of our delegates, who is a prominent politician from Karachi, purchased a set of 10 fine quality ties for just 30 Yuan – much less than $1 per tie. I myself purchased a Chinese version of an iPhone 4  – an exact copy of the original – for 150 Yuan against the selling price of 1200 Yuan.

These pleasantries aside, the Chinese have proven to the world that they can seriously conduct business and are capable of thinking everything in terms of business – be it the policymakers or the common citizen.

The choice is ours to make