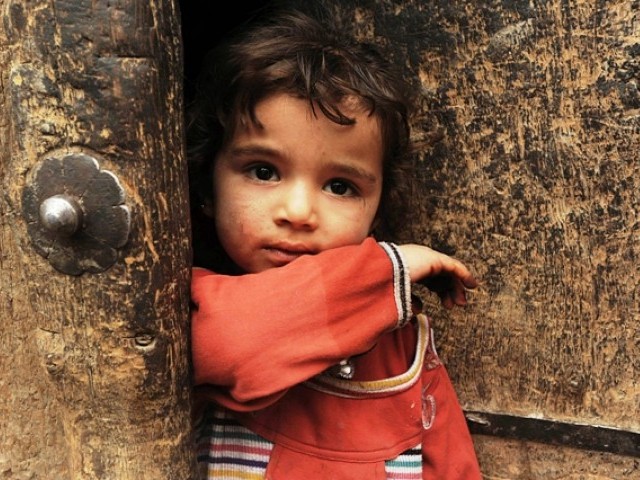 I can give my daughter nothing but life, I am hoping she will be my life to me. PHOTO: AFP

Chandini is only about four feet, nine inches tall. Her body seems to have naturally bent from the strain of having carried four children, one after another, on her waist for about a decade now. She had her first child when she was 17-years-old.

She ruefully points at her first born, a boy, who was desperately trying to reattach a broken arm to a doll’s body, and says:

I took one look at the child, and I couldn’t stop my tears

She had wanted a daughter.

Jagat, Chandini’s husband, earns his living by screening the trash and selling what is possible to the scarp dealers. She sobs as she talks about him:

He earns about Rs60 a day, when he decides to go to work that is

Sobbing is one of the only things Chandini will able to use her eyes for in a few years time. She suffers from progressive vision loss that will result in blindness. She is almost half blind now.

I trip over vessels, bundles of clothes and sometimes even my kids

She laughs as she says this. A laugh that has more pain in it than humour.

Yet, Chandini was sure enough that she wanted a daughter. She had tried three times and was lucky the fourth time, when she gave birth to Suhana a year ago. I asked the obvious question, half-exclaiming:

Why? Why would you conceive again and again with the hope of delivering a daughter?

“Why not?” she counter-questioned and paused.

Chandini lives in the Valmiki Nagar slum of West Bangalore. With rising prices, it is almost impossible for a family of six to think of living in a city like Bangalore with no income. In such a situation, I was very curious to know why Chandini was so desperate for a female child.

I tried explaining my confusion to her.

People want a son these days, Chandini. They feel a son would fend for them, a daughter would be a burden. I am, therefore, curious to know why you wanted a daughter?

All the while thinking about India’s irreparably skewed sex ratio.

Chandini pointed at her house – a small, 10 feet wide shack with bare, wet walls made of mud. She had a few utensils she uses to cook a meal when there were enough grains in the house. There were three small bundles of clothes and one earthen pot which stored drinking water for the family.

“Do you think we can ever live in a better condition?” she asked in a voice that expected a sincere answer from me.

With deep guilt, I looked at her, not knowing an answer to that question. She spoke herself:

That is why I want a girl. What we need is a little bit of care, some love and affection and some respect. A girl is more sensitive; I am hoping that my daughter will take care of me one day.

She did not mean to suggest that sons are insensitive; she felt that her daughter would be more of a support to her. She added in a genuine voice:

I can give my daughter nothing but life, I am hoping she will be my life to me.

When I left Chandini’s tiny house, I think I sensed the changing times.