Why won’t NADRA recognise the Kalasha? 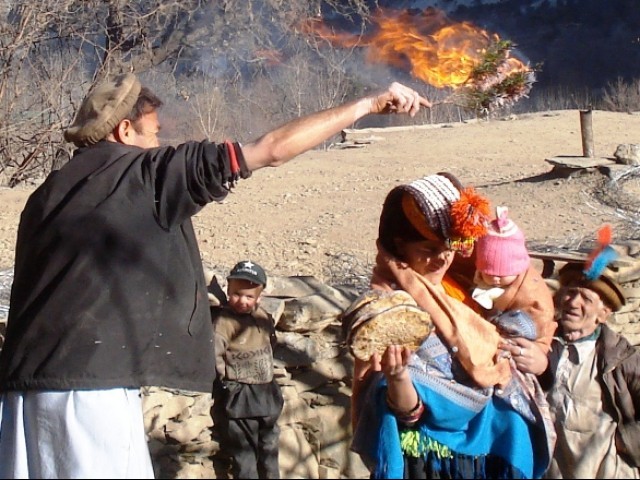 The Kalasha women wear a traditional outfit and neck beads as a hallmark of their Kalasha religion and they don’t cover their faces. PHOTO: SIKANDAR

Did you know that there is a pre-historic animist religion called Kalasha –  a religion still practised and cherished by the Kalasha people of the Hindu Kush valley?

Are you also aware that the Kalasha people don’t even have an option to choose their religion in the ‘religion box’ endorsed by the National Database and Registration Authority (NADRA)?

Nadra came under scrutiny when it refused to rectify typographical errors it had made of a Christian MPA Rana Mahmood that identified him as a Muslim on his national identity card.

The issue drew a considerable amount of attention from both the media and human rights activists, who criticised Nadra for various violations of fundamental rights. Following the criticism, Nadra issued an official statement apologising for the error made. The statement reads:

[A] High level inquiry was ordered by the authority to investigate the matter as to why such inconvenience was caused to our honourable MPA… [I]t was revealed that a Nadra data entry operator had mistakenly put his religion down as Islam because of his Muslim-sounding name.

The Kalasha community has been a victim of this human rights contravention by Nadra since the day the ‘religion box’ was introduced by General Ziaul Haq in the 1980s and the ‘Kalasha religion’ was not included in the list of religions.

An old Kalasha elder confides that,

We didn’t have any option to have our religion on our identity cards like everyone else, even though our religion is the oldest of all, so we brought the matter to the attention of MP Bhandara (MNA elect for minorities), when he visited the Kalasha Valleys. He made an effort to convince the authorities to include the Kalasha religion in the list of religions but they didn’t register Kalasha instead they included ‘others’ in the list of religion as an option.

When the computerised national identity cards (CNIC) were introduced, the Kalasha religion appeared in the list of religions for a short while before Nadra removed it again. (One is led to ask who exactly instigated this removal and why?)

The Kalasha tribe has repeatedly protested, demanding recognition for their religion – an acknowledgement which is their constitutional right to have but the authorities have shown no interest, constantly ignoring their plea to the point of even sidelining a recommendation from the Ministry of Minorities Affairs to include the Kalasha religion in the list of religions.

The outcome of this ignorance and negligence, due omission, is that it paves a way for systematic discrimination.

For example, in Chitral, Nadra officials have repeatedly insisted that the Kalasha women cover their dresses with a scarf while taking photos for their national ID cards. The Kalasha women wear a traditional outfit and neck beads as a hallmark of their Kalasha religion and they don’t cover their faces. On the one hand, the Kalasha people are deprived of their rights to maintain their identity, culture, religion and language as per the constitution, while on the other hand the tourism ministry exploits them, making every effort to feature the Kalasha women in posters and commercial marketing, using them as advertising assets as the ‘Mystery of the Kalash’ on their brochures and billboards. And yet they have no right to be acknowledged or accepted as a separate religion.

With all this flamboyant advertising, where is the sense in asking them to cover their traditional neck beads with a scarf in the ID card profile photo?

Can Nadra’s motives be questioned in this case?

Does it mean that Nadra is on a mission to assimilate every diverse cultural aspect of the people of Pakistan?

Nadra seems to have claimed the right to decide people’s faith, depriving Pakistani citizens from acknowledging their respective faiths; tarnishing their rich cultural and religious heritage. In fact, the whole idea of declaring religion in official documents is absurd, since religion is regarded as a personal matter.

Having to declare religion for official use should be treated as a violation of our basic primary rights.  It may lead to discrimination in official as well as daily affairs.

If, however, declaration of your religious belief is still a prerequisite, then it is high time Nadra revises its discriminatory policy towards other religions and either amends the list it has at the moment to does away with it altogether.

They have to accept the fact that Kalasha is a separate religion, and they have to concede to the religious diversity in Pakistan so that every Pakistani, whether Muslim or non-Muslim can be confident that they are equal before the law regardless of their religious or spiritual beliefs.

The mistreatment of the Kalasha people in Pakistan has been very well observed, noticed and pointed out by Ms Nosheen Abbas, a BBC journalist, who calls to attention a very important fact about the complex situation they face. She says,

Pakistanis would view Kalash culture with disapproval but nevertheless many, mostly men, still flock to the valleys from around the country to experience the liberation the festival offers.
The Kalash use the blanket term “Punjabi” for the Pakistani men who suddenly show up in the village staring at women, trying to “chat them up”, and making many feel uncomfortable. They do not consider themselves Pakistani. In fact, they call anybody from elsewhere in the country “Pakistani” – as if that term would not cover themselves as well. The Kalasha tribe, like every other minority group, deserves what the constitution provides for them; the basic right of recognition and acknowledgement.

It’s not much to ask for.

A member of the Kalasha community and a student of Economics at Aristotle University in Thessaloniki, Greece. He tweets @seekndare