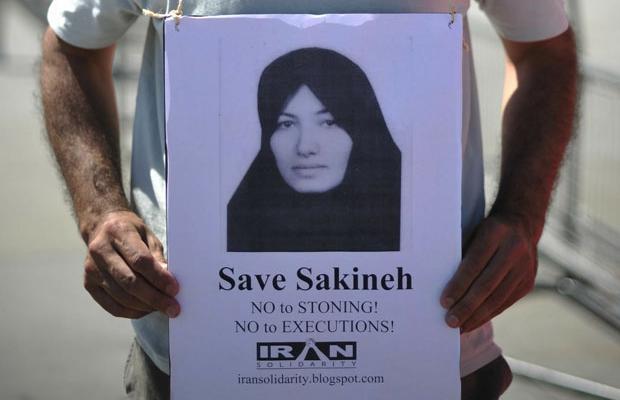 Sakineh has been sentenced to death by stoning by an Iranian court. PHOTO: GETTY

Sakineh Mohammadi Ashtiani is a young Iranian woman who was sentenced to death by stoning in Iran, a sentence that sparked an international outcry over  a practice that many see as archaic and barbaric. Since the initial sentence the twists and turns in events have moved rapidly.

The initial sentence was handed down by a court in Tabriz in May 2006, she was charged with committing adultery (despite the alleged incident occurring after the death of her husband) and was sentenced to 99 lashes, which was carried out. Then, in September she was convicted by another court, the details of which are still rather shaky, of adultery and of being an accomplice in the murder of her husband. But wait, is she being put to death for adultery? Or for murder? Or for both?

“In the first place, the allegation was murder,” the lawyer [this is Ashtiani’s lawyer talking] told Babylon & Beyond. “She was accused of killing her husband, but as her children forgave her … she was pardoned and there was no more allegation against her. But to complicate the case, the court raised the issue of adultery.”

Sharifi declined to outline Ashtiani’s role in her husband’s death, saying it would be just too darn shocking for the public. [LA Times]

Despite the original cases being from 2006, developments this year have come thick and fast, here’s a roundup:

Some things to consider about the Iranian judicial system: while the judicial code is fundamentally based on Shia Islamic law, there are a number of innovations and adaptations that make Iranian law fundamentally unique. Chief among these are the introduction of circumstantial evidence (not just direct evidence) and an appeals process for the death penalty that give a High Court (not local courts) final say, two things that are not elements of traditional sharia law.

Having said that, neither of these are particularly likely to have an impact on Ashtiani’s case. The involvement of a High Court means that all the international pressure can have more impact than in a local case, there is also the paradox that the Iranian state will not want to appear like it has been influenced by “the West”. This would be an embarrassment to the regime and set an unwelcome precedent of foreign intervention being successful.

And while the presentation of circumstantial evidence certainly appears to make things more just, there are a number of other fundamental problems, such as the fact that the testimony of a male witness is still worth more than that of a woman (literally, it states that two female witnesses equal one man), and the difficulty of establishing rape, as opposed to adultery, when the alleged victim is a woman.

Personally, I oppose all forms of the death penalty, because I, like Albert Camus, believe it absurd for the State to kill a human being for such abstract and seemingly irrational reasons as concepts of “revenge” and “punishment”. Thus, I sincerely hope that Ashtiani is pardoned and can walk free, home to her two children. However, it must be noted that criticisms on this basis that are leveled at Iran by the US Government are also somewhat absurd.

In Hillary Clinton’s statement linked above, she says that the Department of State is:

“troubled by the case of Sakineh Mohammadi Ashtiani, who garnered international attention for her verdict of death by stoning.”

One wonders what specifically about Ashtiani’s case troubles Clinton. Is it the fact that the means of execution will be stoning? Does this mean that Clinton wouldn’t condemn Iran if the means were changed to hanging? And what of  reports of stoning in other countries, such as Saudi Arabia (which is a US ally)? Or is it the fact that Ashtiani’s guilt, especially the murder charge, is seemingly not believable? In which case, to what extent would the US Government be willing to make statements on the judicial affairs of another country’s courts?

According to Amnesty International, a list of countries that used the death penalty in 2007 includes, apart from Iran, the United States itself, as well as US allies such as Saudi Arabia, Egypt, Pakistan, Iraq and Taiwan, all in the top 10. Rather than selectively condemning high-profile cases such as Ashtiani’s, in countries that the US considers foes, it would make more sense to rethink the death penalty itself. Presumably the US Department of State wouldn’t look at each and every case to see if it was delivered fairly. Let alone the fact that it also carries out assassinations, outside the scope of the courts, on its own citizens.

Let me be clear. I strongly oppose the execution of Ashtiani. Yes, having read the news (largely organised by a mainstream media relying on the same sources and pushing the same narrative), the charges seem trumped up and yes, Iran’s human rights record is terrible. But the main reason for my opposition to her execution is that it is fundamentally absurd to execute a human being for past actions.

The broader debate should not be about pointing fingers at the questionable Iranian judicial process, such calls seem tainted by bias and selectivity and, pointed by Western hands, may do more harm than good in the largely adversarial political narrative between Iran and the West. The broader debate should be about whether our own hands are clean. Why should the State have the right to take the life of one of its citizens, not as a preventative measure, not as a successful deterrent, but purely based on some absurd concept of vengeance? What, specifically, is the benefit of this to the citizens of the State?

By all means, get involved in advocacy to save Ashtiani’s life, but also spend some time thinking about whether the death penalty in your own country makes rational sense. Remember, Sakineh Mohammadi Ashtiani is a young mother with two children. She does not deserve to die. Neither to do any of the other human beings currently languishing on death rows all over the world. Their deaths will not solve anyone’s problems.