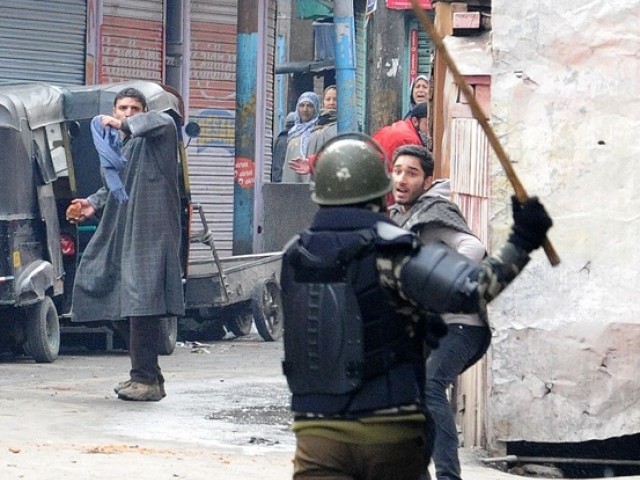 Not one movie has been made by Bollywood where an army soldier is shown firing on unarmed protesters, as has happened in Kashmir. PHOTO: AFP/FILE

Manu Joseph, a senior Delhi based journalist and the editor of Open magazine recently asked why it was obscene to accept that a historically wounded group of  people is ready to move on. He was, of course, referring to the people in Kashmir, where a war has left 70,000 people dead and 8,000 victims of enforced disappearances – in short, a gruesome trail of death and destruction which has few parallels in modern history.

As Mr Joseph points out, it is difficult, almost impossible to convince the highly nationalist Indians about how merciless the war in Kashmir has been. If you tell any ordinary Indian that 70,000 people have been killed in Kashmir since 1989, they will blame most of the killings – if not all of them – on terrorists from Pakistan.

Why, because they have seen it on news channels and read about it in newspapers. If you narrate the horrors of Kunan Poshpora village to them, they will say the charges against the security forces were motivated and never proved. If you say that 8,000 people have been subjected to enforced disappearances, they will simply tell you that you are lying.

This is mainly because the Kashmir dispute has greatly contributed to the understanding of “nationalism” in a fragmented country like India – where the major political parties like the Congress and the Bharatiya Janata Party (BJP) have used the issue to polarise the opinion of people.

The dispute is also a sentimental one for the ordinary Indians who have seen their armed forces sacrifice their lives to keep the Kashmir territory under India’s control. The true nature of the war, the cost paid by ordinary Kashmiris with their blood, has never been revealed to the people.

In an emotionally charged and chaotic atmosphere such as this, any argument blaming the Indian state for coercing Kashmir into submission is seen as anti-national or, if things get out of hand, a pro-Pakistani view and vice versa. This is bound to invite wrath of “patriotic” Indians and sadly, the truth becomes a fatality.

The Indian film industry and the electronic news media have played a very important role in shaping this parochial idea of nationalism. The war in Kashmir has been cinematically depicted as the ploy of a mullah bent on destroying the “secular” fabric of India from his dilapidated hideouts across the border in Pakistan.

India’s vibrant media, whose members have been openly accused of corruption, relay a daily dosage of “nationalism” to its thriving middle class viewers with jingles of patriotic Bollywood songs playing in the background. Charged debates are held on prime-time news where bigots, self-proclaimed experts and literally anyone who can speak are passed off as authoritative voices on Kashmir. Instead of accepting the wrongs done to the people of Kashmir in the name of nationalism, these people lay the blame on ordinary Kashmiris and Pakistan for igniting trouble in the valley.

The Indian film industry, too, has played a dubious role in narrating the story of Kashmir. For example, not one movie has been made by Bollywood where an army soldier is shown firing on unarmed protesters, as has happened in Kashmir. This is because such scenes will apparently show nationalism in a bad light and may “demoralise” the security forces.

Thus, we see these forces depicted as great saviours of humanity who came to the rescue of ordinary Kashmiris in 1989 when the conflict erupted in Kashmir valley, not as men who carried out massacres in Sopore, Bijbehera, Gaw Kadal and Pathribal. Whereas the young men who picked up arms to fight against these atrocities are shown as supporters of Pakistan’s ideology of breaking India’s sovereignty.

This is a tricky situation that India has dragged itself into. The vicious propaganda wars that were waged built a castle of lies, which is now decaying and the skeletons kept hidden inside the closets of nationalism are slowly tumbling out. India is an extremely nationalistic and a deeply polarised country where the character of a person is determined by his allegiance to a very sordid idea of nationalism. Here, the mythical honour of country comes before the justice for the ordinary victims of state atrocities.

Over the last two decades, the state has successfully managed to throttle any voices of dissent, which came out in support of a free Kashmir, or at least talked about ending atrocities by men in uniform. Not anymore.

The dawn of the social media in Kashmir has dramatically changed the dynamics of this conflict. The young generation who have seen their loved ones perish in front of their eyes are no longer dependent on journalists to write about the atrocities unleashed on them. They are writing their own stories now. How then to get away with this “morally indefensible” occupation of Kashmir where a new generation of writers, poets, journalists, singers and intellectuals have risen in one voice to protest the occupation of their land?

Blame the ordinary people for inviting trouble. Blame Pakistan for starting the war. Blame the elite for preserving the wounds. Blame the kids protesting the occupation for throwing stones. Blame the separatists for igniting passions. Blame the writers for speaking “lies”. Blame whosoever comes in the way of nationalism. Thus spoke Manu that “Kashmir is happy”:

Trauma in Kashmir is like a heritage building—the elite fight to preserve it. ‘Don’t forget,’ is their predominant message. They want the wound of Kashmir to endure because the wound is what indicts India for the many atrocities of its military. This might be a long period of calm, but if the wound vanishes, where is the justice? India simply gets away with all those rapes, murders and disappearances?

As if speaking out against the gruesome atrocities in Kashmir was a crime. As if demanding rightful answers from the state was not the right thing to do morally. As if keeping the wounds fresh in our memories was being seditious, anti-national. As if seeking justice for the thousands of women searching for their husbands was not worth a fight. As if demanding punishment for the murderers of ordinary Kashmiris in the name of nationalism meant pushing Kashmir into the dark ages.

Kashmir doesn’t live in a solitary Cafe Coffee Day in Srinagar or in the wooden hotels perched on the hills of Gulmarg where a plate of kebabs and hot tea laid out on table besides a window opening into snow clad mountains makes it easy and romantic to draw conclusions that Kashmiris want to move on.

Kashmir lives in far flung areas; in villages where people shut their doors before the sun sets, lest a rapist barges in to outrage whatever little is left of their modesty; in towns, whose people are waiting for their long gone sons to return home, in mountains where unidentified bodies lie buried and unclaimed; in the rivers whose waters have turned crimson with the blood of ordinary Kashmiris and in the heart of each and every Kashmiri who has been a victim of this gruesome war.

It is far easy to rally around the cause of mythical nationalism and jingoistic patriotism than to stand up for the rights of subjugated people. This is a just battle, and it has just begun.

An aspiring novelist, a proud son, a journalist, a coffee addict, a movie buff, in that order, Jehangir tweets as @Gaamuk

Sarabjit and Sanaullah: Politics over murders

Why the Kashmir solidarity day façade?

Indo-Pak peace façade: What about Kashmir?

Harud: The story of a soul-less Kashmir