The beginning and end of Anders Breivik 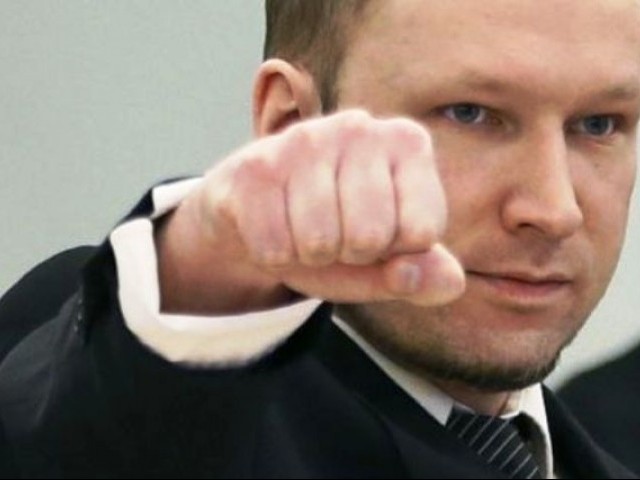 Whatever Breivick’s inspiration really was, what would stand out to a commoner is that it was inspired by ‘Islam’. PHOTO: REUTERS

In this day and age of Islamophobia, Anders Breivik’s recent trial marks a significant shift in the way the word ‘terrorist’ is perceived.

My perceived image of a ‘terrorist’ stems from my own country. Unfortunately, there is irrefutable evidence to prove this – be it the incidents external to Pakistan, such as the July 2005 London bombings and the November 2008 Mumbai attacks, or the list of internal suicide bombings.

Since the 9/11 attacks, certain prominent characteristics have come to be associated with the word ‘terrorists’ including but not limited to: ‘Muslim’, ‘Pakistani’, ‘rightist’, ‘conservative’, ‘extremist’, ‘young’, ‘male’ and many others.

July 22, 2011 proved to be an important day in the history of ‘terrorist’ stereotyping for Muslims, when a man named Anders Breivik, a Norwegian militant, savagely massacred youths attending a Labour party camp after setting off a bomb outside the government offices in Oslo, killing 77 people.

While the initial reaction of the media, regarding the political affiliation of the assassin, was routinely assumed to be with some Islamic group, phrased in the The New York Times as:

There was ample reason for concern that terrorists might be responsible.

It turned out that the murderer was neither a Muslim nor Pakistani or even remotely connected to any Islamist group, but had every trait of a far-right terrorist.

This event, although saddening, was an eminent mark for Muslims in general and Pakistanis in particular across the globe – it offered their image some redemption.

During the recent trial it has come to light that Breivik is a ‘cultural conservative’ and a practitioner of ‘political’ not ‘religious’ extremism, whose acts were aimed at defending Norway from rising immigration and multi-culturalism.

According to Breivik ‘multi-culturalism is a destructive ideology’ and he views himself as a political activist on a mission to save Norway from being invaded by Islam through elimination of ‘cultural marxists’.

So what would you call an anti-jihadi fanatic: a right-wing nationalist who committed mass murder or a terrorist?

While Breivik exemplifies an ‘Islamophobe’, in actuality he has adopted the pinnacle of the same ‘extremist’ ideology that he claims to be against. In his own words his inspiration has been al Qaeda and militant Islamists.

With such statements from Breivik, more fingers are yet to be pointed at Muslims.

In a globalised world where Islamists do indeed have the lion’s share of acts of terrorism publicised in the media, it is perhaps not surprising to an average person that he is not the first non-Muslim to be inspired by such extreme jihadist notions. It appears that the mastermind has cleverly designed his testimony, as well as his massacre, to ensure elimination of Muslims from Norway and Europe. Whatever Breivik’s inspiration really was, what would stand out to a commoner is that it was inspired by Islam.

As a result, rather than Breivik’s incident having a neutralising effect on the image of Muslims in the west, his statement about his inspiration is likely to make matters worse for Muslims. More so, because Breivik is a failed politician, providing the courtroom as a platform alongside excessive media coverage of his views is likely to exacerbate the scenario with the birth of more fanatics who might be inspired by his views.

It makes me wonder that had al Qaeda not been given much importance in the media, perhaps the Oslo atrocity wouldn’t have happened. But then again when it comes to concealed political agendas, there is always more than what meets the eyes.

In my unprejudiced view, it really does not matter what Breivik’s motivation was. The conflict in ‘politics of hate’ is hidden in the words ‘right-wing’ and ‘left-wing’. Whether jihadist ideology served as his inspiration or not, no liberal would have taken inspiration from it. His inspiration was a direct consequence of his rightist ideology.

This is analogous to the Islamic stage – the Islamic left will never take inspiration from any jihadi historical narratives of Islam but the Islamic right might and have done so. The problem then is with the rightist mindset that acknowledges the violent acts committed, but justifies them or deceives themselves into believing it as ‘acts of goodness rather than evil’ or ‘a small barbarian act to prevent a larger barbarian act’ in the words of Breivik.

In the world of rightists’ collective identity politics, there is no room for individualism of liberals. I would never assume that the political or religious ‘left’ is wholly pure, virtuous and correct, but when it comes to a fanatic impulse to violence, those on the far-right largely have the market cornered.

Nothing in the world can justify taking an innocent life, be it a Muslim, Hindu, Christian, Jew or other, and in my dictionary there is no room for the word ‘casualties’. Having read Breivik’s account, I am however left speechless.

One person with a belief is equal to the force of 100,000 who have only interests.

How can we punish someone who says that ‘being declared insane would be a fate worse than death’?

What use is capital punishment to a person who is ready to blow himself up?

What retribution can we offer for the loss of blood at the hands of extremists?

For such people, death is peaceful.

But life; life is much harder.

The only way to punish Breivik then is a life of humiliation that his mission was not accomplished, that we all still find ‘unity in our plurality’; that no matter what our beliefs are, we can still feel affection for each other as human beings; that in our world there is no room for violence; that we embrace each other with open arms and strongly adhere to human rights; that we can ‘live and let live’; that the boundaries between East and West have actually been broken because of his aggressive acts; that the flag of multiculturalism has been raised much higher as a result; and that we only recognize two kinds of people in this world ‘good’ and ‘bad’ and no other.

By defying our vulnerability physically and emotionally to the ascendancy of a violent far-right political and religious culture, we can actually win this war.

So my plea to everyone is, in the words of Joe Blow:

One person with homicidal right-wing beliefs is equal to the force of a 100,000 who think only Muslims can be terrorists.

In a logical comprehension of Islam, whether, the word ‘Muslim’ is used as a ‘noun’ or as an ‘adjective’, there mustn’t be any connotation of the word ‘terrorism’ associated in theory or practicality of economic, social and public sphere.

I am Pakistani and Muslim, but I am not the terrorist; Breivik is.