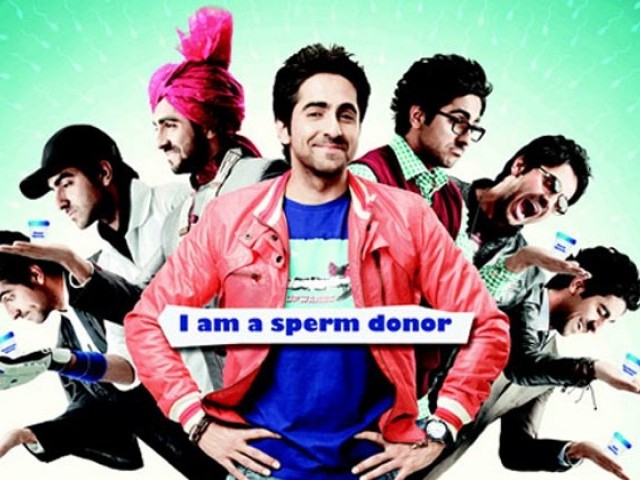 Dr Chadda eventually brings Vicky in to donate sperm on the premise that his great grandfather had 19 children. PHOTO: PUBLICITY

There was a time when an action sequence was all that was needed to capture the audience. Vengeance and thrill always succeeded at the box office. Add a little romance to the story, and you were sure to have yourself an award winner.

Now, however, modern audiences have grown tired of the same old stories. Movies today have different plots, a lot of which address social issues and real life concerns. These would previously have been condemned by people at large which is why taking them to the big screen was never an option.

Interestingly enough, the audience of the 21st century is more accepting and more willing to appreciate real life issues depicted on a big screen. The movie, Bol, for example, tackled the issue of family planning – a real problem plaguing Pakistani society, but one which we had shied away from and not given any real attention to.

Thought-provoking cinema is not just appreciated but encouraged these days and the movie Vicky Donor illustrates this well as it is interesting with a controversial spin to it.

Vicky Donor is the story of a Punjabi boy named Vicky Arora (Ayushmann Khurrana) who encounters a not-so-successful, middle aged doctor called Dr Baldev Chadda (Annu Kapoor), who runs a fertility clinic and is actively looking for a sperm donor. Dr Chadda eventually brings Vicky in to donate sperm on the premise that his great grandfather had 19 children.

This is the story of Vicky’s balancing act with a Bengali girl, Ashima Roy (Yami Gautam), who he is in love with. It is about their trust and understanding alongside him becoming the biggest sperm donor at the fertility clinic.

Dr Chadda convinces Vicky to donate his sperm so that he can give happiness to those parents who are not blessed with children of their own. For this, he quotes some factual yet hilarious examples to Vicky, from Mahabharat’s time.

The sequences between Dr Chadda and Vicky are hilarious and here Kapoor, being a veteran actor, definitely deserves the credit.

I must say, that it is not easy to share the screen with an established actor like Annu Kapoor who doesn’t need a supporting cast to entertain the crowd. Ayushmann Khurrana, however, makes his own presence felt and noticed in just the right way. The two actors greatly compliment each other in almost every scene, be it dramatic or funny.

Those who know the roles portrayed by Kapoor in his career will agree that he has a calibre that is not shared by many actors. Be it his Gali Gali Chor Hai or 7 Khoon Maaf, this actor is a genius. For those who are in any doubt, I recommend that you watch Ek Ruka Hua Faisla where a 21-year-old Kapoor portrays a 59-year-old lawyer.

Ayushmann is also full of surprises. Performing a diverse role, he switches from easy going to smart-aleck to hilarious, pleasantly surprising the audience and finally astonishing them with his climax performance. This actor knows how to command attention with the riveting way in which he delivers.

Yami Gautam is a well known name on Indian TV channels, but her debut in this movie is sure to leave many smitten by her charm and charisma. She does not have an oh-so-sexy role but even so, I am sure that many will smile after watching her and observing her simplicity. She can go a long way provided she chooses the right roles.

On the whole, John Abraham has managed to produce a great piece of funny and witty cinema. The movie has a fresh and interesting plot; if we can save a dying man by donating our blood, why can’t we grant our sperm to enable someone to have a baby?

The positives about this movie are that it is contemporary, humorous and showcases some great performances. The only drawback, as far as I can see, is that it lacks star power, which these days is crucial for many movie-goers. The music is average, dialogues are hilarious and direction is promising.

I would personally rate the movie a 7/10. It is definitely a good watch!