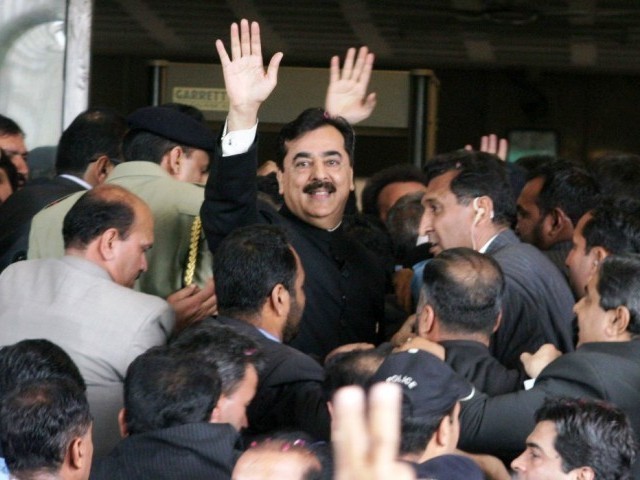 Gilani was waving his unrestrained hands and ushered into safety by his colleagues. PHOTO: MUHAMMAD JAVED / EXPRESS

The pictures were baffling.

Once a verdict is announced and the gavel comes pounding down, a convict is supposed to be handcuffed and bullied away by a team of hardnosed officers. This one was waving his unrestrained hands and ushered into safety by his colleagues.

Those guilty of serious crimes serve endless sentences languishing behind bars, gripping them as if they were the only ones listening. Prime Minister Yousaf Raza Gilani served his in the air conditioned comfort of courtroom number four between the moments when Justice Nasirul Mulk uttered the short order and seven pattaywalas (court ushers) in starched white uniforms pulled back the chairs on which the judges were seated. This was a total of 37 seconds.

The punishment handed down to the prime minister by the seven member bench took almost everyone by surprise. During the course of the contempt trial, the Supreme Court had emphasised the severity of the allegations against him to no end. His counsel was forced to complete his arguments swiftly and the attorney general was made to assure that he would do his best to prosecute the same person who had just given him a fancy new job. So, a clash that fizzled out in around 30 seconds was a huge disappointment, shameless conspiracy or an unexpected triumph – depending on where you stand.

That said, it’s important to appreciate the context of this verdict.

On January 10, the Supreme Court threatened to take any of six steps for the prime minister’s failure to obey the directions of the Supreme Court and write to the Swiss authorities to reopen criminal cases, which had been closed after the promulgation of the NRO.

The real troublemaker in the January 10 order was option No. 1. Had the Supreme Court declared that Yousuf Raza Gilani is not an honest person and is not “Amin”, he would permanently have lost his qualification to become member of Parliament under Article 62(1)(f) of the Constitution. Charitably however, the court decided to initiate contempt proceedings against the prime minister under option No.2  instead.

But this option was always toothless. Consider the fact that discussions surrounding the president’s constitutional power to pardon took centre stage no sooner had the trial begun. Recent news reports also suggested that the interior minister had outrageously started making preparations to convert the prime minister house into a sub-jail in anticipation of a guilty verdict. In these circumstances, if the Supreme Court proceeded to punish the prime minister with jail time, the result may have been downright embarrassing. Imagine Mr Gilani enjoying tea and biscuits in the lush gardens of the PM house whilst serving a maximum six month sentence forcefully handed down by the apex court. A mockery would have been made of its authority. Moreover, whether we like it or not, sending the longest serving prime minister in Pakistan to prison is a particularly sensitive matter. This is after all, the leader of a party which has the most number of seats in Parliament. The thought of him suffering in jail would have probably evoked a rather palatable concoction of sympathy and fury.

Despite this, the Supreme Court did add some bite in the second paragraph of the short order in stating that the conviction “is likely to entail some serious consequences in terms of Article 63(1)(g) of the Constitution”, thereby suggesting that the prime minister may be disqualified from continuing as an MNA. How, when and by whom have been left teasingly open by the court.

By holding back in this respect, the Supreme Court has yet again left the door open for Mr Gilani to save his political future.