A reporter’s eye: Inside the Supreme Court 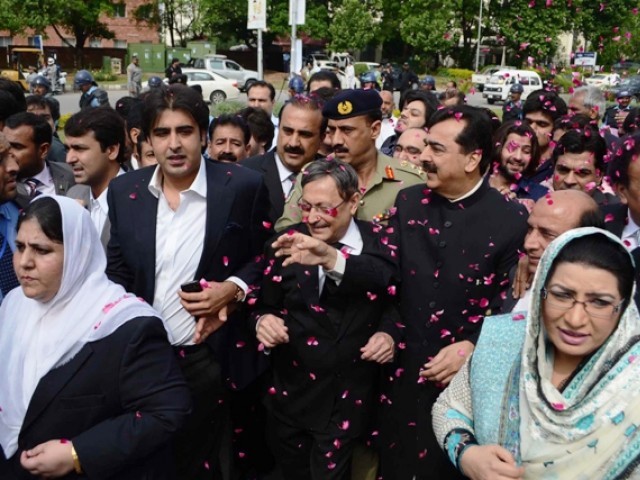 The courtroom looked like a village panchayat (jirga). No one was following the rules. PHOTO: QAZI USMAN

Among heavy contingents of law enforcement agencies and hovering helicopters, a horde of people marched towards the Supreme Court yesterday. As they crossed countless walk-through security gates with special entry cards in their hands, they looked excited about catching a glimpse of the soon-to-be-convicted prime minister.

While it is totally in keeping with local tradition to create such a scene, at the contempt hearing yesterday, goras (foreigners) too joined us at the forefront.

Inside courtroom number 4, the environment was electric. All seats in the courtroom were filled hours before the proceedings began. Besides lawyers, the room was packed with federal cabinet members, journalists and deputed officials.

Only the seven seats of the judges were vacant and, while a few eyes kept shifting towards the clocks, most focused on the gate from which the judges were to make their entrance. Finally, an announcement was made:

(Sir has come to the court!)

Everyone stood up and the whispering started.

“The mood of the judges suggests that the order is hard-hitting,” a gora whispered in my ear.

“It could be otherwise,” was my reply to him.

“What do you mean? That they did months of exercise only to reward this gentleman (the prime minister)?” he asked.

However these announcements went unheard. The courtroom looked like a village panchayat (jirga). No one was following the rules. Cell phones were out and restless journalists were ferociously texting. Photography is strictly prohibited inside the courtroom, but the excited crowd did not care. Flouting ethics, the excited journalists captured every moment of the proceedings.

After some time, the presiding judge of the seven-member trial bench Justice Nasirul Mulk asked Aitzaz Ahsan to make a request to the respondent to come forward.

At this moment, the judge and the respondent, our prime minister, appeared to be strangers to each other.

“The prime minister is found guilty of contempt for wilfully flouting the direction of the Supreme Court,” said Justice Mulk to a composed-looking respondent, now a convicted man.

Clad in a black sherwani, Gilani stood from his seat, leaving his partners Chaudhry Shujaat, chief of PML-Q on his right and Dr Farooq Sattar of MQM on his left. Justice Mulk started reading out the short order.

“The detailed reasons will be given later…” was the first sentence.

The room again buzzed with murmurs. The court order was short, followed quickly by a brief exercise of interpretations.

“My Lord! I have to make submission!” but the judges simply turned away and left.

There stood the prime minister in the middle of a courtroom full of his deputies and allies, convicted for contempt of court and done with his punishment.

The convicted prime minister rushed to his counsel Aitzaz Ahsan. It was evident that, with his open waving in the air, Gilani was inquiring about his fate and the consequences of the verdict. His counsel, who had been addressing the court for the last three months, was denied the chance to utter more than one phrase.

Irfan Qadir, the attorney general, and other party workers gathered around the prime minister and he consoled them. But what was astonishing to see was that the prime minister left the courtroom and emerged shortly afterwards, smiling and waving to supporters.

Outside, journalists scrambled to get their hands on a copy of the order. The cameras were alive and somber-looking ministers expressed their views on the outcome of the case.

The brigade of ministers rose and made their way to the prime minister house (adjacent to the Supreme Court) to discuss his next move – I made my way back to the office.