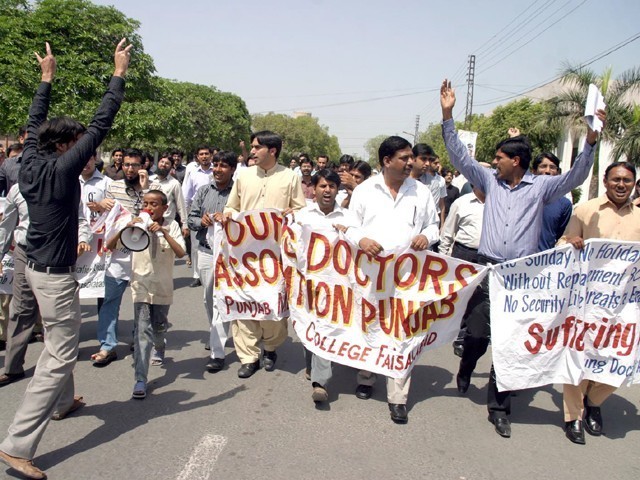 Doctors have a right to voice their concerns but this should be done without affecting patients. PHOTO: INP/FILE

Fifty per cent of the general cadre doctors in Punjab retire while still in the basic pay scale (BPS). The health department, like many other government departments, doesn’t have clearly defined requirements procedure which, once attained, put you into the next pay scale.

This is what the doctors call a service structure and are fighting for in Punjab these days.

The issue came in to the limelight this time when 691 new doctors were recruited by the Punjab government through the Punjab Public Service Commission. The government had to transfer around 450 doctors to adjust these new doctors which infuriated the Young Doctors’ Association (YDA) Punjab. As a consequence, outpatient departments (OPDs) across the province were shut down.

There is, however, another side to the picture. Health department figures show that some 25,000 patients visit public hospitals’ OPDs just in Lahore every day. Most of them are poor and cannot afford private treatment.

The chronology of the YDA shows that since its inception in July 2008, every time the group went on strike, sooner or later the government gave in and accepted the doctors’ demands. Senior doctors believe this has encouraged the young doctors so much that they go on strike any time they feel as if a demand of theirs has been unmet.

This also shows the writ of the government which first makes a decision and then withdraws it. If it has to withdraw the decision of transfers, it should do so before people lose lives. And if it has to stand by its decision, it should take senior doctors into confidence, many of whom are not siding with the YDA, and put an end to the suffering of patients.

As far as the service structure is concerned, doctors have a right to voice their concerns but this should be done without affecting patients or mustering the support of opposition parties in the province. This is purely an administrative issue and should be resolved on administrative grounds.