Bhoja Air crash: Where are our media ethics? 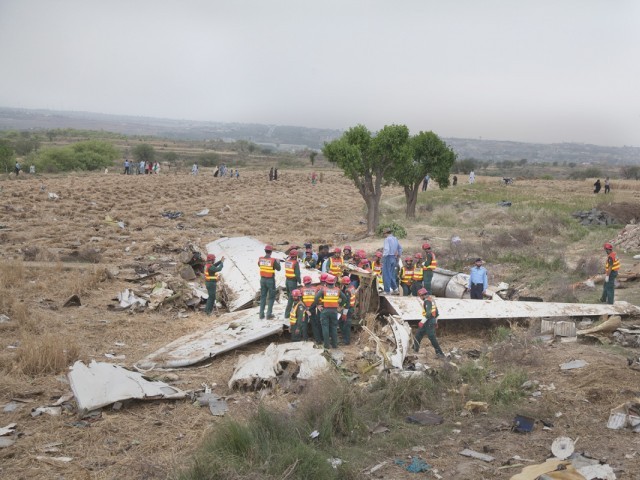 Channels must give citizens the integrity and respect they deserve, and absolutely avoid the act of invading their space. PHOTO: MYRA IQBAL/EXPRESS

Hit by one colossal tragedy after the other, the people of Pakistan are heartbroken and disappointed. What could have been an averted disaster became the inevitable when Bhoja Air decided to fly its 40-year-old Boeing 737-200 for Rawalpindi on April 20, 2012.

Boarded by newly married couples, children and their parents among others, at 5:05 pm from the Karachi airport, the inaugural flight came hurtling down towards the outskirts of Rawalpindi at around 6:46 pm on Friday.

While I checked channels for updated reports and alerts on any survivors, I couldn’t help but notice how rash and obscenely inappropriate the local reportage was. As though adding insult to the injury, intentionally or not, local private channels barged in on grieving family members with distasteful and untimely queries while flashing images of dismembered bodies and weeping relatives.

It reminded me of the unfortunate incident when elementary school students from Faisalabad went on a fieldtrip to Kalar Kahar. Their poorly maintained, overloaded bus toppled over and killed dozens. Reporters reached the point with their cameras and microphones and the first question that was asked of a bleeding, confused child was:

Enraged by this vulgar question, I had no other option but to switch the television off. I can’t imagine what the child felt.

It brings us all to the primary question: Where on earth are our media ethics?

While arguing about this dilemma with my friend, he asserted that there is a dearth of journalistic ethics in the country due to lack of education on the subject, but I had to disagree. Certified academic courses on ethics, I opined, don’t necessarily enlighten individuals.

We all know someone who, despite their possession of laminated certificates, degrees and what not, happens to be the most vile and pretentious one in the circle. The same could be said of our local media; italicised mentioning(s) of bachelors degrees from XYZ universities and obscure media courses from obscure media centres don’t necessarily equip an organisation with general decency.

So it is not just about the lack of education on the issue, it’s about common sense – and no one needs to reach out to academics for that.

An unexposed, illiterate man from a remote village often knows that when one is grieving the loss of their beloved, it is imperative to provide firm, quiet support without invading their private space with a list of offensive questions let alone a glaring HD camera.

So is this what we think it is? Is a citizen’s suffering a golden opportunity for channels to cash in on?

Ratings soar high when mishaps occur. Millions tune in for a plethora of reasons: To view the government’s swift action (or lack thereof) to alleviate the situation, technical causes for the accident, help provided to the relatives left behind or possible corruption in the case.

I am amazed that in a series of banning everything under the sun, Pakistan Electronic Media Regulatory Authority (PEMRA) remains pathetically oblivious of the misconduct on part of the local media. No policy, in my knowledge, has been presented or passed by media watchdogs in terms of ‘letting people just be’ during fatal incidents.

In a shoddy attempt to display compassion and emotion, the reporting of the air crash was accompanied by melodramatic tunes in the background on various channels and sudden images of limbs and blood sans discretionary warnings.

Twitter and Facebook exploded with justified rage. Everyone agreed that channels must give citizens the integrity and respect they deserve, and absolutely avoid the act of invading their space with images, questions and damned cameras.

After checking a poll held by The Express Tribune, it somewhat allays my disdain for local reportage on tragedies to know that 77 percent of Pakistan’s online presence disapproves of how the media covered the Bhoja Air crash.

While inquiries will be made into the apparent corruption of the Bhoja Air company and of the negligence exhibited by the Civil Aviation Authority (CAA) and aircraft manufacturers, it could be rightfully said that a judicial commission ought to be formed into straightening out the disorderedly behavior displayed by our news channels.

Pemra must re-evaluate its priorities and understand that some things actually need to be banned. For example, intrusive, glamorised reportage during tragedies.

It’s simple: Get to the bottom of the case without getting under our skin. A citizen’s suffering is not your chance to increase ratings. Show some respect.

An American Pakistani student, blogger and doodler in Lahore. She enjoys writing satire on culture and politics. Mehreen tweets @mehreenkasana.

Unapologetic acid attackers: 'She asked for it'

An open letter to Maya Khan

Pakistan's Twitterati: The good, the bad and the ugly