Lifestyle Pakistan: To India, with love 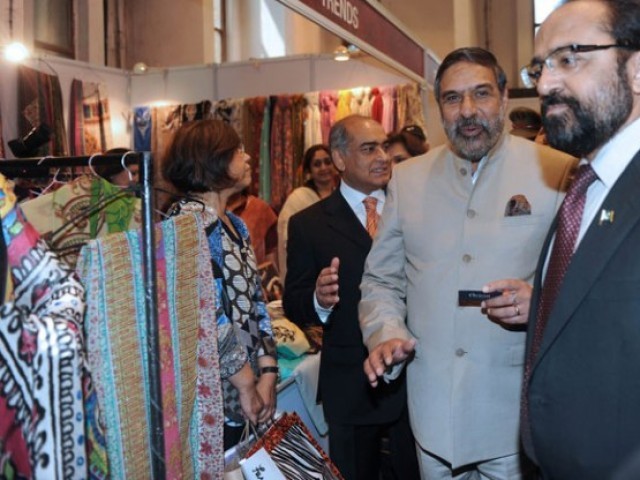 'Lifestyle Pakistan' became the talk of the town and in matter of four days Delhi got divided into two groups – those who visited the exhibition and those who didn't. PHOTO: AFP

If India and Pakistan had to update their status vis-a-vis each other on Facebook, what would they write on their page? Would it be ‘divorced’, ‘separated’, ‘it’s complicated’, ‘single’ or ‘in a relationship’? Seeing their mood and bonhomie these days the most appropriate status update would be “in a relationship”.

After the 26/11 Mumbai attack in 2008, the two neighbours almost separated and their relationship remained complicated for two years. However, with the passage of time the wound started healing and a new realisation dawned on them; that it’s futile to lead separate and complicated lives just because of some misunderstanding. They understood that false ego should not come in the way of the instinctive urge to be together.

“Lifestyle Pakistan” in New Delhi is a by-product of this new realisation. More than 100 Pakistani traders, entrepreneurs, top designers and models turned up in India’s national capital recently to display that face of Pakistan which has not been exposed to the full public glare in India. For the first time, an exclusive Pakistani trade fair and exhibition was organised in the heart of Delhi.

For Indians, it was a special treat for four days, starting April 12 and ending April 15. Despite the lack of proper publicity, “Lifestyle Pakistan” drew huge crowds – some came out of curiosity, but many came to buy Pakistani fabrics, basmati rice, paintings, artworks, handicrafts and many other products.

It became the talk of the town and in a matter of four days, Delhi got divided into two groups – those who visited the Pragati Maidan, the venue of the exhibition, and those who didn’t.

There were also those who bought stuff for the heck of it – just to have something from Pakistan. It was not only curiosity that brought people to this exhibition, but there was also a genuine desire to see the Pakistani products first hand. They wanted to meet the people from the other side of the border and interact with them.

It was an eye opener for many who came to the event. The youngsters and the general public, who are fed the story of a country deep in crisis and leading a medieval existence, were in for a shock when they saw the stylishly dressed Pakistani designers and models. They were shocked when they saw so much vibrancy and variety on display from the Islamic republic which many think has nothing to offer except fundamentalism and militancy.

The Pakistani fashion show on the second day of the event was also a prejudice buster for the general people.

“Why can’t we have something like this in India often?” said my friend Ashutosh when I took him around the exhibition, fashion show and music.

Distance breeds misconception and misunderstanding, and this is what has been happening in the case of India and Pakistan. People with vested interests take advantage of the distance and lack of communication. They feed the wrong information and create wedges. For more than six decades, these elements never allowed  us to resolve our differences but instead tried to widen the rift.

Whenever the two countries have been given the opportunity to come together and interact, it has been a moving engagement. It was emotion that was ruling the exhibition, not politics.

Nauseem Kamran from Karachi was not satisfied with the trade in the show, but was happy that life had given her a wonderful opportunity to come to India and meet the people, who the army and other establishments of her country, believe to be the existential threat to Pakistan.

It was this political paranoia that was being tested in the “Lifestyle Pakistan” in New Delhi.

Are we an existential threat to each other or are we complementary to each other’s existence? Can we live in peace in the Indian subcontinent without each other?

“Lifestyle Pakistan” in Delhi exposed the vacuity and selfishness of those political players and regressive forces that want to exist at the cost of the nations’ and peoples’ existence.

Times have changed; both India and Pakistan need each other now more than ever before. New Delhi needs to engage Pakistan to stabilise South Asia both politically and economically. There is also a need to give strength to the liberal and democratic forces,which are at the receiving end of the fundamentalist and obscurantist forces.

Without taking Pakistan along, India cannot think of becoming a major international player. Similarly, Islamabad needs New Delhi to expand its market and give a boost to its sagging economy. Greater understanding with India will also help Pakistan to come out of the prison of India phobia and neutralise those medieval forces which are holding back the progress of the country.

This interaction will make people the real stakeholders in the relationship between the two neighbours. Such engagement will delegitimise the anti-liberal and regressive forces in both the countries.

More than six decades ago, a lot of blood was shed to create a border. Now the new generation wants to create a bridge not barrier over the border so that they can have unrestricted entry into each other’s country.

The doubting Thomases of the world will have their own apprehensions about such rapid change in the relationship status of both the countries.

However they forget that India and Pakistan are not young kids on the international bloc, as they were six decades ago. They know the futility of fighting, they understand the pain of Frankenstein – that how the monster created to harm the neighbour actually ends up harming the creator more.

The two countries also realise that it is the third party, an outsider which has been the major beneficiary of this bilateral tension. Their bitter experience is a lesson for them, it’s their guide. Maturity comes with such experience and history.

The insight gained through such a bitter past will help both the countries to understand each other better. Political and economic circumstances are also favourable for them. It’s not that they are moving very fast in embracing each other; they are just catching up with the lost time. It’s never good to hold onto emotions for long, it’s always better to tell the other partner about true feelings.

Jealousies are bound to take place amongst those who have always been against the close proximity of two people. But do lovers need to care about such people? No. They just ignore them and let the world know about the true status of their relationship.