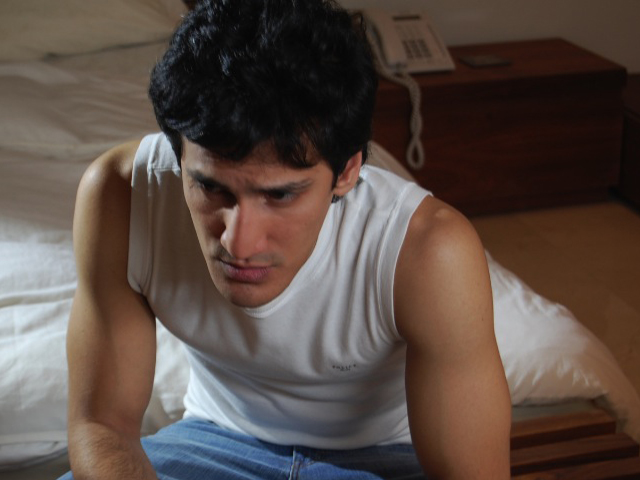 Faraz Haider derives his musical inspiration from life, be it human emotions or current affairs. His debut album Andher reflects this, as most of the songs on the album have been composed by him and the relation of the artist to his lyrics lends them honesty – as if he is relating real life experiences.

As soon as I popped the CD into the disc drive and hit the play button, I was greeted with an Audioslave inspired rock intro. Faraz Haider’s classic rock-esque wails and croons in the title track Andher are disappointing; the music and angry-guy lyrics are predictable and the only thing I really liked about the song is the short guitar solo at the end which is frequently punctuated by Haider’s piercing vocals.

The second song on the other hand, Dunya Ghoom Kay, is a breath of fresh air. On this track, Haider’s talent shines through; his voice contains an air of honesty that fuses well with the strum of the guitar, and the vocals and melody blend well together to offer a pleasant listening experience.

Another track I enjoyed listening to is Benaam – again, because it is devoid of the rock-enthused guitar and drum routine. The vocals on this track are great and Haider’s control and creativity are praiseworthy, especially since he has received no formal voice or music training. Intizaar (which is a duet with Navin Waqar) has an alternative-rock feel to it and is definitely worth a listen because their voices are individually strong and even more powerful together, providing an electrifying resonance.

My favourite track on the album is Tum Hee Jaano. It has the makings of a great love song without being sappy; the lyrics are sincere and the vocals range between soft and very powerful. It starts off mellow and picks up and drifts into a pleasant soft rock melody, where Haider flaunts his remarkably diverse vocal range.

I am a devoted Audioslave fan (particularly because of Chris Cornell) and it is evident that Haider’s music is heavily inspired by them, but I don’t think there is much commercial value for Urdu rock music. Having said that, I would love to watch Haider perform Audioslave’s Shadow on the Sun or Getaway Car, because he has the vocals to do brilliant covers of those songs.  The alternative rock genre  is definitely where his strength lies; I can picture his unplugged gigs being roaring successes. His voice has just the right elements to be fused with mellow acoustics.