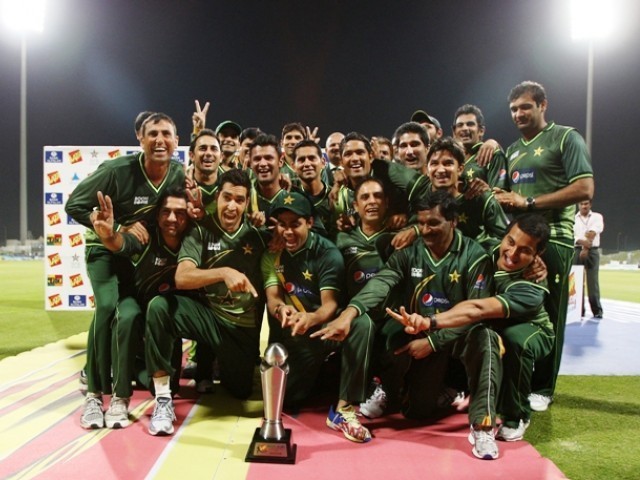 Out of the three T20 World Championships played so far, Pakistan has made it to the finals twice and lost in the semis once. PHOTO: REUTERS

Since its inception mid-way through the last decade, Twenty20 cricket has added a new dimension to the gentlemen’s sport. This relatively new brand of cricket not only marked a certain form of revival for the sport, it also managed to expand its fan base by exploring regions of the globe that had previously shunned it because of the length of its duration.

The inaugural T20 World Cup soon followed and brought the most significant twist in its otherwise steady growth. The crowning of India as the World T20 Champions marked wild celebrations back home and took Mahendra Singh Dhoni and many of his unknown men to instant stardom. The format that India previously ignored suddenly became its most viable investment opportunity.

It is with this background that the Indian Premier League (IPL) took off in 2008 and staged the most glamorous and star-studded brand of cricket ever seen. The excitement of watching the world’s finest hitters playing under fancy uniforms for millions of dollars suddenly changed the way cricketers and fans viewed the game.

The first edition of IPL proved to be a huge success with Rajasthan Royals beating all odds to clinch the title under the leadership of Shane Warne. Some of the finest performances came from players from across the border; Sohail Tanvir of Pakistan was named the tournament’s best bowler. This is where, however, it all got messy.

In the wake of the Mumbai attacks, tension between Pakistan and India mounted as a result of which Pakistani players were shamefully sidelined for the 2009 edition of the tournament. The same pattern followed in the inaugural Champions League where Pakistan’s domestic T20 Champions Sialkot Stallions were not included in the tournament.

As things stand today, the IPL is going through its fifth edition. The excitement is naturally not the same. Pakistan is still not a part of the show while players from all around the world participate in this annual cricket gala.

This of course begs the question – who really is the loser here?

Is it the Pakistani players, the fans or the IPL? The answer, it seems, can be easily derived from Pakistan’s heroics in T20 cricket over the last five years.

No T20 side can be complete without the most explosive striker in the game’s modern history, Shahid Afridi. Boom Boom was made for this format and he soon showed his liking for it. Afridi was the man of the tournament in the 2007 World T20 Tournament and played a key role two years later in helping Pakistan lift the cup for the first time.

He is the biggest super star in Pakistan cricket and has also won countless admirers in Australia and England through his heroics in the Big Bash and Friends Provident T20 tournaments. IPL is clearly missing out on this huge crowd puller.

Nazir has taken to T20 cricket like a duck to water. He has been one of the most successful players from Pakistan in this format of the game. He has played some of the most breathtaking knocks in ICL, BPL and Pakistan’s Local T20 tournaments. If Afridi is brute force, then Nazir is all timing.

When it comes to bowling under pressure, there are few bowlers who can match the composure and artistry of Saeed Ajmal. His lethal combination of doosras, off breaks and quicker ones leave batsmen with little chance to attack him. He has been Pakistan’s most potent bowler under testing times – an ideal candidate for high pressure T20 cricket.

After the two W’s, Umar Gul is next in line when it comes to lethal bowling. No bowler can match the pin point accuracy of his yorkers that are so crucial in T20 cricket. Who can forget his super spell in the 2009 T20 World Cup against New Zealand when he took five wickets and then followed that with an even greater display of bowling against South Africa in the semi finals. Gul is any T20 captain’s dream bowler.

Rana Naveed made his mark in T20 cricket pretty early, regularly playing in the Big Bash T20 tournament in Australia. Like Gul, Rana has the natural ability to bowl a mixture of accurate yorkers and slower deliveries that make slogging almost impossible against him. He has been a key contributor for the Sialkot Stallions in the domestic T20 tournaments as well.

Over the last three years, Mohammad Hafeez has been the most improved all rounder in international cricket. Not only has he become a key strike bowler, but also a solid batsman who consistently produces results. Like many of his other colleagues, Hafeez has performed admirably in the T20 format putting in consistent performances for both Pakistan and his local side Faisalabad Wolves.

Few hit the cricket ball as hard and as long as Abdur Razzaq. The veteran all-rounder might be nearing the end of his career but his capabilities as a genuine all-rounder are still truly intact. He has been a regular feature at the Australian Big Bash and also plays for his county in T20 tournaments.

Just recently, he played a breathtaking knock in the English Twenty20 Championship and snatched the game for his side – a genuine match winner in this form of the game.

These are only a few of the countless outstanding T20 match winners that the world is missing out on due to the politically motivated IPL administration. A true disservice to the once gentleman’s sport.

Correction: An earlier version of this blog post incorrectly stated that Mohammad Hafeez represents the Sialkot Stallions. The error has now been rectified.