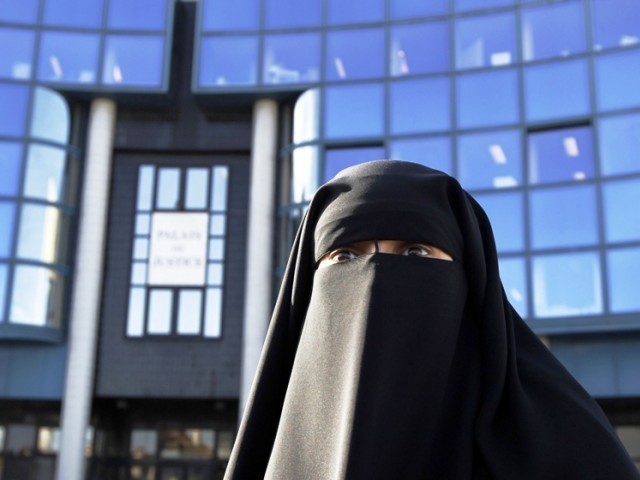 I could hear their thoughts: A radical, mullah husband must have forced her into this male chauvinistic, suppressive piece of clothing. PHOTO: REUTERS

Books have been written about it, feminists have insulted it, Muslim feminists, however, have defended it, and international laws are being passed against it. While there are some extreme cases where women are forced to wear a niqab (veil), most of the niqab-wearing women I know in Toronto and Karachi wear it due to a personal choice.

I have some experience with the performing arts and expression, whereby one uses the body and it’s form as a canvas to initiate reaction and to enable visual dialogue between the performance artist and the viewer. Therefore, as a social and creative experiment, I decided to take on the niqab for a day in a largely multi-cultural and tolerant society.

My first stop was the  station where I waited amongst the early risers in their suits, heels, polished shoes and winter jackets for the morning train. Almost every other person gawked at me, trying to be discreet, but failing miserably.

It had started. The stigma; the discomfort I was causing. I was supposed to conform and wear formal, Western work attire. Instead of looking away, I stared back with my kohl-rimmed eyes, excited for the rest of the day to proceed.

However, I realised that their gaze held another sentiment: pity. I figured that in their minds any woman who chooses to take advantage of the Western mottos of independence and freedom, and dresses as she pleases, would never be caught dead in this black garb.

I could hear their thoughts: A radical, mullah husband must have forced her into this male chauvinistic, suppressive piece of clothing. While Canada has a large population of hijabis who have assimilated into North American culture quite well, the niqab, to this day, causes quite a stir.

Ignoring the stares I proceeded to my destination; the art gallery I worked at.

“Excuse me, ma’am… oh wait… Mariam? What on Earth… get the hell out of that right now… is this a joke?,” spat out the owner.  I calmly revealed that I was getting in touch with my Muslim roots.

“None of this in my space, I am not paying you to discover your roots here, you hear me?” she said, ordering me to remove my niqab.  I refused and was asked to take the day off and recuperate my brains at home.

Did I have no right over how I covered my own body? If we had the right to uncover it, what gave others the right to judge us for covering it? Moreover, I was the same person underneath the niqab, in no way compromising upon creativity, intelligence and work ethics. If anything, I was presenting myself in the least superficial way possible, but getting flack for doing so.

I proceeded to a meeting scheduled with potential clients looking for a wedding photographer. They had gone over my portfolio and sounded enthusiastic over the phone. They were of German descent, cultured and educated; there was no way they would give me the cold shoulder for wearing a niqab.

But I was wrong.

As I sat in the lobby of the hotel waiting for them, I attracted questioning gazes, blatant stares and harsh looks. The couple entered, glowing and looking happy and in love and proceeded to the sitting area. They scanned the lobby before taking their seats. Finally, I stood up and took a few tentative steps toward them.

“George and Carla? What a pleasure it is to finally meet you. Let’s discuss some ideas, shall we?” I said excitedly.

“Is everything okay?” I implored.

“It’s just that… well… we were expecting someone… errr… umm” George sputtered, at a loss for words.

“Someone dressed a little differently, perhaps?,”a hint of humour in my tone. “My dressing shouldn’t change anything. I am a hard working photographer and I will deliver, that I promise you. Shall we proceed?”

“Actually… my fiancé and I must dash, we’ll get back to you via e-mail at a later date,”and saying that they rushed out the door.

I never received another e-mail or phone call from them.

Moving on, I was ready to meet friends for lunch – Pakistanis who considered themselves liberal, free minded and progressive.  Though not very religious, they were still culturally Muslim so I was sure they would be more accepting of my idea.

“Mariam! Is that you under there? You silly goose what are you doing?” one of them screeched in the middle of a well-known Thai restaurant.

“Well… if you must know, I’m getting back in touch with my Muslim roots and giving Islamic spirituality a go,” I replied, expecting encouragement.

“Oh please, you can’t party, be a social artist and wake up one day wearing that,” they scoffed, their unease and embarrassment at being seen with a woman in a niqab apparent.“You are either born with that mindset or you are not.”

I felt torn. I couldn’t be an artist, socialise, dress the way I want to or get in touch with the religion I was born into if I hadn’t lived a certain way? It was an unsettling feeling, because I have never judged another human being over their apparel or religious practice. My social network consists of various beliefs – Zoroastrians, Christians, Hindus, Sikhs, Buddhists, Jews, atheists, agnostics and Muslims from all walks of life – and I wholly respect their traditions and values, because that is the mark of tolerance.

That day, I got all the answers I needed and I was ready for thorough reflection.

No one forced me to wear it, I had not been beaten into submission and there was no religious reason behind my project; it was conducted to challenge and motivate society into seeing their intolerance and impatience with the other, the foreign, the “pariah”.

We are living in a world where appearances, superficiality, conformity and social imitation are required to succeed and gain acceptance. Much like those that dare to be different, I was misunderstood, instantly rejected and scrutinised for making a choice regarding my clothes – a right that should be available to everyone in a modern and progressive society.