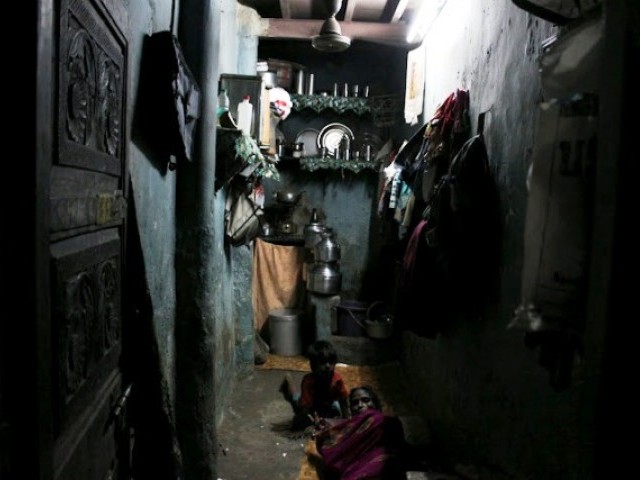 I was treading carefully on a mixture of stinking animal and human refuse, wet mud and miscellaneous junk that I dare not think about. PHOTO: RAKSHA KUMAR.

Bombay (now known as Mumbai) enamours me like it has many people. While the plane lands over the city, you see a seamless mix of shanties and high rises.

It is not so inconspicuous on the ground.

Riding a local train from Santa Cruz to Malad East, I gazed at the best and the worst of living conditions of the people of Bombay. I was in the city to report on the raising real estate prices in the city’s slums. As I reached my destination in Dharavi, one of the largest slums in Asia, there was a strange sensation in my stomach because I was treading carefully on a mixture of stinking animal and human refuse, wet mud and miscellaneous junk that I dare not think about.

After a few minutes, I reached the home of Rashid, the auto driver.

His family is large with four children, when asked about them, he smiled and said,

We need people’s shoulders to cry on when we are in distress, you see.

Rashid lives in a 10ft-12ft room that doubles as a kitchen and a tiny portion in the corner is marked off as wash area.

In order to reach the bathroom, Rashid and his family trek down at least five minutes outside their house to a dingy public toilet in the far corner of their small, crowded neighbourhood. The toilet, Rashid tells me has not had water for the past two days and in any case, there is no certainty that one would get to use it when one wants.

We have to wade through the queue.

The six members of the family share a coir mat and sleep on the hard cement floor. Khalida, Rashid’s wife, recycles her limited utensils to cook and feed her family.

The house is regularly flooded in the rainy season. And when this does happen, the family first saves the children’s books and only then moves to protect other items in the house.

Sitting on an inverted tin box, the only seating arrangement in the house, and sipping tea that was specially made for me, I could only think about how distant the privileged classes are to the realities of families such as Rashid’s. Unless one ventures out and forces oneself to be a bystander in the lives of those like Rashid, this sort of poverty will remain an exotic fantasy in the minds of those with cosy apartments.

Considering slums and substandard living conditions make up large parts of the cities of India, understanding them becomes the first step in trying to alter the situation. The common reaction of the privileged class is to cringe and shudder at the very thought of passing by a shanty town in a car. This, or they just resort to simply complaining at the very existence of this sort of housing.

Spending some time as spectators, will also bridge the palpable mental gap between the more privileged and the less privileged.

In a country like India, the more we understand the underbelly of our cities the better we can perform as a cohesive urban unit. Currently, the distance between the two urban worlds of comfort and distress seem unbridgeable. But, the future can certainly be different if we desire.

After having a small chat with Rashid’s family while I was walking away from their house, I felt a small tug on my sleeve.

Turning around, I saw 11-year-old Salma, Rashid’s daughter, smiling at me.

And in impeccable English she confidently asks me,

Could you please give me your number?

“Yeah… Sure!” I fumbled and handed my card.

“I will call you for advice on what college I should go to in a few years,” she said.

“You should,” I replied, “I would be happy to tell you all I know.”

I left with a huge smile on my face.