Why should Afridi steer the ship? 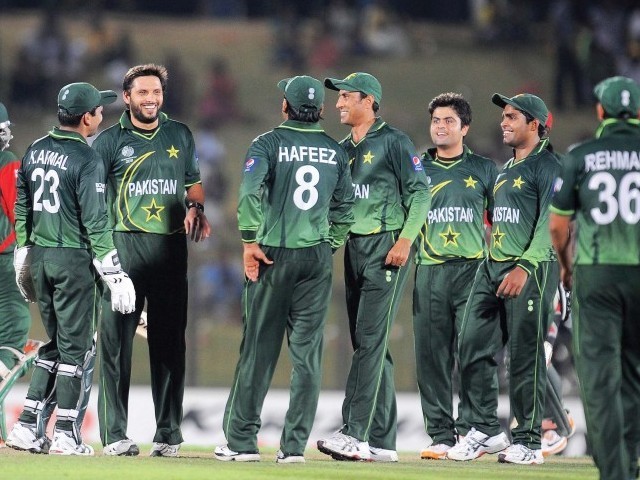 His previous performances and leading capabilities, as seen on the field, should be all that matter. PHOTO: AFP

On March 30, 2011, when the team lost to our arch rivals and eventual champions, India in the semi-finals of the coveted 2011 World Cup, this is what our team captain at the time, Shahid Afridi had to say:

“I want to say sorry to my nation. We tried our level best but couldn’t make it. I am pleased with the way my team played throughout the competition.”

He apologised for leading a fragmented, jaded, and weak team to the top four; something which he envisaged on February 9, 2011. The talismanic all-rounder was stripped of his title as captain by the infamous ex-chairman PCB Ijaz Butt. This step, however, must have delighted his critics, especially when we consider that the darling of the crowd took a short-lived retirement.

Although, much to their disenchantment, he came back with a vengeance; ever since his comeback he has scored 345 runs and taken 29 wickets with some player of the match awards too. The captaincy conundrum has once again appeared in Pakistan’s cricket, owing to the likelihood of skipper Misbah’s removal from captaincy of the shorter formats.

The anti-Afridi lobby is vociferously campaigning against his reinstatement as skipper, but there is a strong rationale for giving him the crown which was unjustly taken from him, if and when the ageing Misbah is booted out.

Firstly, statistics corroborate the fact that Afridi has performed well with both bat and ball as a skipper. However, there are people who baselessly say that the burden of captaincy hampers his own performance. It is noteworthy that Afridi was the highest wicket taker during the 2011 World Cup, having taken 21 wickets during the mega event. This alone is a testament to his capabilities as a captain.

Afridi’s batting, as well as bowling heroics prove adequately that being captain does not hinder him in the least. Hence, the notion that captaincy saddles him is nothing but hogwash.

Moreover, Afridi took command of a dejected, beleaguered, and a broken team – one that was marred by spot-fixing cases, but who were almost the champions in the 2011 World Cup.

After the Lord’s Test against Australia, Afridi led the team to a 2-3 loss against England in a closely fought series which we would have won had it not been for poor umpiring. The series was great for Afridi as skipper because he managed to take the best from the boys even when the British crowd and media were busy shouting out profanities.

The series against South Africa was, again, a closely fought series which ended in the same result; he took the team to New Zealand and won the series amidst all the pressure that one can imagine. He was never assured of leading the team; the World Cup started on February 19, 2011, and Afridi was appointed captain on February 4, 2011. Yet, he took full responsibility for whatever transpired in the mega event.

In 2010, the team for the T20 World Cup was announced on the March 15, while Afridi was named captain after 8 days.

Why? This was unprecedented. Still the man didn’t raise an eyebrow.

Thirdly, Afridi always led with a great deal of passion which was evident on the field. He must be given credit for instilling a winning attitude in a jaded team. He reposed confidence in players like Hafeez, Shehzad, Shafiq, and Ajmal who were naïve at the time, but delivered because Afridi was able to motivate them.

Now, almost all of them have made a mark for themselves. Moreover, the way he used senior players like Razzaq and Akhtar was commendable.

At the end, one needs to question the wisdom of the former head of PCB. He removed a successful captain who was gradually taking the team forward; new players like Asad Shafiq, Wahab Riaz, and Ahmad Shehzad found their footing under his leadership and the team was an assortment of juniors and seniors.

There was no pretext for removing Afridi.

The author is a BSC Hons student at FC College University where studies politics, international relations and economics. He tweets @pakistan199220.

Azhar Ali: A crutch to a feeble batting contingent