Not impressed by Pawnay 14 August 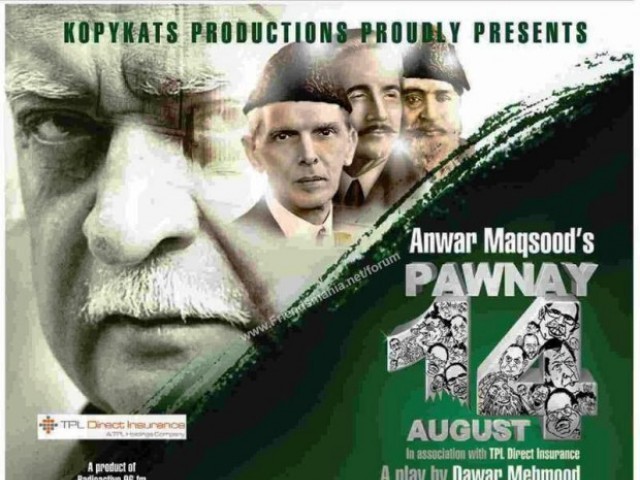 Everyone who loves Pakistan is bound to cry at the current state of affairs. So, for me, that was not really much of an accomplishment. PHOTO: PUBLICITY

With great expectations, I ventured into the Arts Council auditorium to see Anwar Maqsood’s humour come to life for the first time on stage. I had been warned that there would be seating problems, and there were. The production planning was disrupted due to the two days that the city was ablaze, and so people were accommodated well beyond the capacity of the hall.

The producer tried to calm everyone’s nerves as more and more people poured into the hall. Honestly though, it was a tinderbox in there, and it seemed like a war of nerves between the people already seated and the producer.

The play opened to what at best can be called an ordinary set.

However, the script left much to be desired. Please don’t get me wrong, Anwar Maqsood is a fantastic writer, one who has mastered the art of repartee over the years. But, in my opinion, a theatre performance needs to go beyond some basic level of scene building; otherwise it falls into the stage show trap that many commercial stage productions in Pakistan fall into.

A loosely constructed scenario may work for Hanif Raja and co, but to think that one could hold the audience for an hour and half, without any narrative build-up is unfair. Having said so, I do admit that there were moments of extremely high emotion, and one would even have tears in one’s eyes, but everyone who loves Pakistan is bound to cry at the current state of affairs.

So, for me, that was not really much of an accomplishment.

The play lacked any clear focus; it seemed that the three stalwarts of the Pakistan movement were being mocked for no reason. It seemed as if we were all indulging in Pakistan bashing, and honestly I resent that. If political parties use the Quaid’s mazar as a place to hold rallies, it is because they know that resonates with Pakistanis, and if Junoon re-introduced Iqbal to the public, how is that a bad thing?

The current Pakistani characters were card board, and lacked any depth whatsoever. Making a Bengali appear in a lungi, and a Sindhi in an ajrak is hardly ingenious. I don’t think this reflects the script – it shows weak direction and an aesthetic built on over-exaggeration and excess.

The ending of the play was also problematic where the three founders hand over their luggage to a small child and leave – hardly a resolution.

I think if we take on something as difficult as the raison d’etre of Pakistan, we owe it to the audience to present a solution. Also, having the national anthem playing with the Quaid speaking at the same time is an offence against the anthem, and honestly the producers needed to think about how they used the anthem.

On a political note, one wonders if the bourgeoisie Urdu-speaking middle and upper class of Karachi is feeling left out in the new dispensation with Punjab reasserting itself and Sindh wanting to rule all parts of Sindh. One felt that the Urdu-speaking run had been a long one, but now it is over.

Anwar Maqsood, one of the last of the breed of Urdu-speaking intellectuals is making his final stand. And that is probably why everyone in the audience was laughing and crying at the same time.

It truly signifies the end of an era.

The author is a faculty member at the SZABIST Media Sciences program and has varied interests in cultural criticism, media strategy, advertising and product design. He is currently pursuing his MS in Media Studies from SZABIST. He tweets @ideawala.