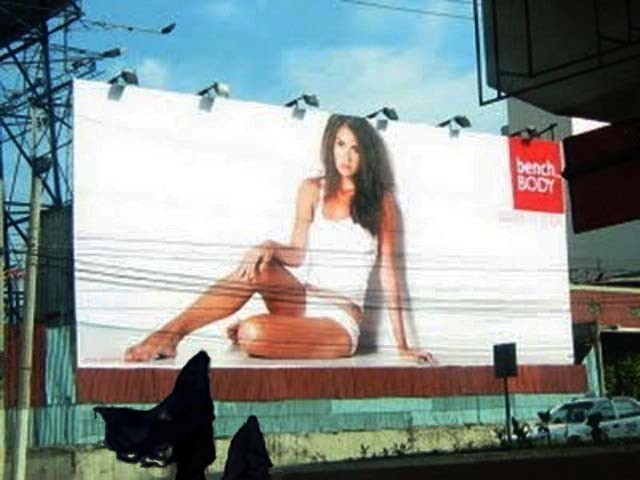 Where does our morality begin and end? It is alright to see a women clad in skimpy clothes on TV, but not in front of you?

I was standing on a main road in Islamabad when I saw a big billboard depicting a woman provocatively posing in a nightgown. There, standing right below the billboard, hidden behind a face veil, was a woman who seemed to be a completely different specimen to the model above.

Written on this billboard, in bold, was the word ‘Hidden.’ This might have been a brand name – I really don’t know what it stood for. However, to me it highlighted the hidden dual-morality disorder of the virtual and real world that is currently sweeping through our society.

Let me explain what I mean by this statement.

By the word ‘virtual’, I mean the world that exists for us in the form of TV, the internet, and of course mobile phones. Although not tangible, this world is binding us to it for longer periods of time with every passing day. TV, which was a rare commodity 40 years ago, is now the basic part of every household. Many people spend hours upon hours losing themselves in the world of dramas and movies. Similarly, talking on the phone or surfing the net for hours on end in not unusual in times of today.

In a way, thus, people are simultaneously living in two worlds – the virtual one and the non-virtual one, both of which have extremely different measures of morality.

Hacking and using pirated software is not considered a crime by many of us, but doesn’t this actually equate to stealing in the real world?

Moreover, if an intimate scene takes place in a movie, it is perfectly normal. However, if you catch someone in real-life publicly displaying such intimacy, it is not tolerated.

Again, many in our society ban their children from dating, but seem to be indifferent to it with it if it happens on Facebook or over a mobile phone conversation.

Can you see the double standard here?

Indian and English movies continue to provide the bulk of entertainment for our masses, and watching women in skimpy clothes has become a norm. In a way we can say that we have become ‘desensitised’ to such things. However, the question that really comes to mind is, have we become sensitised to such things in real life as well?

I came to test this proposition recently.

While going through a busy market place in Islamabad, considered by some as one of the main ‘hubs’ of Pakistani modernity, a woman passed by in tight jeans and a sleeveless top.

All of a sudden she became the centrepiece of all male attention.

In fact, one or two men even started talking loudly about her, elaborating in detail their greatest fantasies. Meanwhile, on a nearby TV screen, a woman clad in much scantier clothes was dancing, yet she failed to grab their attention as they seemed to have been ‘sensitised’ to it.

What does this really show?

Are we in actuality living in two separate worlds at the same time?

It’s perfectly normal to see these scenes on TV, but not in front of you?

And what about mobile phones? Traditionally, we have been a society which has prohibited free inter-mingling of opposite genders. However, today mobile phone flirting is one of the most widespread activities in Pakistan.

Recently, I met a happily married man with two children, who was texting and flirting with four different women at the same time!

If these same conversations would have taken place face to face, they would have been strongly condemned. However, on the phone, it seems, they are perfectly acceptable.

Last of all, the internet.

So where does our morality begin and end?

Are we in the right when we criticise a man who gapes at a woman in skimpy clothes?

Should we question a girl texting with a boy her family does not know about?

Should we admonish an adolescent boy or a girl watching intimate content on the internet?

How exactly do we socially define morality?

Traditionally, talking about sex is taboo in our society, and yet we bear one of the largest populations in the world; food for thought, isn’t it?

Are we actually ready to recognise these double standards in Pakistan or will we stay addicted to this dual-morality disorder forever?

Correction: Due to an editing error, an earlier version of the article incorrectly implied that ‘we have become sensitised’. The error has now been rectified.

A social worker and an educationist, Rafeel is working as a research associate with South Asian Forum for Education (SAFED). He completed his education from Lahore University of Management Sciences (LUMS).

Siachen tragedy: Is a glacier worth their lives?

I am from Balochistan