Gilgit is to blame for this bloodshed 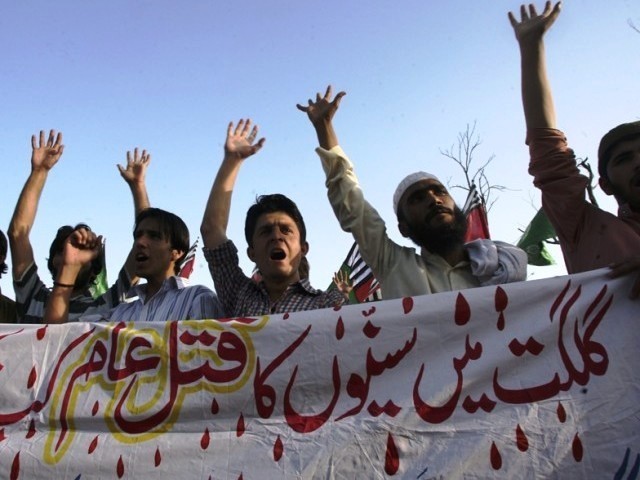 Anybody belonging to this region knows that a majority from one sect shamefully smiles at the atrocities committed on the other sect. PHOTO: AFP

‘Paradise on earth’ might be a cliché, but it is the only locution that describes the beauty of Gilgit. Its elegance is matchless, but the sectarian violence that has plagued this area has reduced this city to a mere shadow of the beauty it once boasted.

Spring had always filled Gilgit with a rosy fragrance, but this spring, all anyone can smell is the unmistakable stench of blood. It is truly baffling how the gardener has lit his own garden on fire. People from different sects are killing each other ruthlessly, and one doesn’t dare to venture out on the streets unless they want to be murdered in cold blood.

Gilgit was once regarded as unique because it contained people from all sects. The people of this area had been living in peace for decades. They intermingled, intermarried and co-existed peacefully, but then somewhere along the line came General Ziaul Haq, and thus began the Sunni-Shia rift.

The year 1988 saw numerous killings and a majority of the victims belonged to the Shia community. People now refer to this black period as 88s tension. Swiftly and surprisingly many began to realise that they belonged to different sects, and started to feel that they were not compatible with each other.

Gradually, however, peace returned to the area, but the memories of 88s tension had left deep divides. People started to live in neighbourhoods of their own sects; Shias lived only with Shias, and Sunnis only with Sunnis. Gilgit city became divided into strictly Sunni, Shia, and Ismaili neighbourhoods.

A decade thus passed without any major incident. Just as the memories of the terrible violence began to fade from peoples’ memory, on January 13, 2005 a prominent Shia cleric, Ziauddin, was killed by some unknown person. Many people blamed the agencies, because the cleric was a major proponent of having a separate syllabus for Shia students. This killing made the situation worse than ever. The city was already defined by separate neighbourhoods, so killing the people of other sects had become far too easy. Tons of people who got trapped in the others’ neighbourhood got killed immediately.

After this incident, peace never returned to Gilgit. Every now and then, innocent people are killed. People are murdered in the open while driving, shopping, or just strolling down the street. Many are not even sure if they will return home because they have to go through the “other sect’s” neighbourhood on their way to work.

Recently, 16 Shias were killed after having been dragged out of buses in Kohistan. This week, grenade killed five and injured 35 Sunnis in Gilgit. Yesterday, five people were killed from the Shia sect in Chilas. I just hope nobody gets hurt today.

Usually the blame of such incidents is put on the government, the ulema or branded a Jewish conspiracy. I don’t discount the possibility of any of the above. However, the government is definitely responsible, and the ulema’s negative role is not hidden either.

However, what I would like to say out loud is that us Gilgitis are the guiltiest of all. I know what drawing room conversations are like; good people with strong morals, who don’t even dream of killing others, give solid approval on the killings of people from other communities.

Anybody belonging to this region knows that a majority from one sect shamefully smiles at the atrocities committed on the other sect. I have friends from different sects, and most of them mourn the deaths from their own sect, but in the same breath, try and justify the pain caused to the other. I, being a Gilgiti, realise that the problem lies in the attitude of the common man in Gilgit; grieving our own whilst rejoicing the loss of the other.

Clerics are not the problem. The real problem is the people who flock at their calls for strike. Our uncritical and unanimous acceptance of their demands is the issue at hand. The problem is that Gilgiti Sunnis never protest and burn tires for the killing of Shias and Shias do not do anything when a Sunni is murdered. The problem is that even the best of us see each other as strictly Sunni or Shia. The problem is that we are hypocrites who have forgotten how to be human beings.

There will be no end to this violence if children are taught that only their sect and their morals are right, whereas the other is always wrong and are to be punished. Children are poisoned from a young age, and are fed ideas and prejudices that are not their own.

If the Gilgitis want to co-exist peacefully, then they will have to strive to change this attitude of hate. They must start respecting human lives regardless of religious belief and they must condemn any killing regardless of sectarian linkages.

I would like to specially encourage the youth to open up their minds. Let’s live in peace – what is the point of all this bloodshed, when we all believe in the same God?

An AKHSS Gilgit and KL-YES Alumnus, currently pursuing a degree of BSc. Hons. in Political Science from LUMS. He is interested in perennial philosophy of religion, politics, and economy

For how long will people like Muzaffar Ali, from GB, remain disenfranchised?