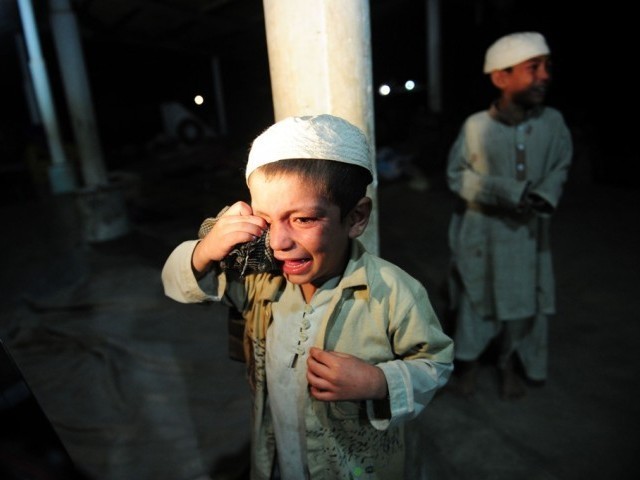 What was their crime to deserve such brutal and excruciatingly painful punishment? They merely plucked flowers for a female teacher of theirs. PHOTO: AFP / FILE

The sun was shining down in all its glory on blossoming flowers which were ready to be plucked. Young children, not over the age of five, were seen laughing and giggling while birds flew and chirped overhead – creating a fusion that signified the beauty that this world holds. Three of those young children stepped forward to pull a few flowers for their teacher. However, fate had a sardonic way to disrupt the content that shone on their faces.

This is not a movie script, nor is it an unraveling of a fictional story. This is a real life story of Aasia and Junaid (aged four), and Aqsa (aged five).

They were ‘severely tortured’ by none other than their own madrassa teacher, after being made to lie on the floor with heavy bricks on their chests and legs, only to be beaten by sticks. What was their crime to deserve such brutal and excruciatingly painful punishment? They merely plucked flowers for a female teacher of theirs.

I have a niece who is five years old; she is the love of my life, my life line. Every day, before leaving for school, she runs to our yard and pulls out flowers to present to her class teacher. The first thought that came to my mind after finding out about Aqsa, Junaid and Aasia was her. And I shuddered.

And then all I could do was wonder. I wondered if these ‘so-called’ preachers of peace ever felt remorse for what they did to the young minds and bodies of adolescents enrolled in their ‘institutes’. This is not a one-off case that can be brushed under the carpet. And before I’m labelled a liberal fascist by many, I want to clarify that I’m speaking for children of the lesser god; children who come from families that cannot support expensive private education; who are not like me and you. If this makes me whatever-you-may-want-to-call-me, then so be it.

It is high time that our government on a macro level, and us on a micro level, step in to put a full stop to atrocities that are carried out at these ‘learning centres’ which are supposed to spread the message of peace, harmony and love. After all, isn’t that what Islam teaches?

There have been numerous other such cases where madrassa students were tortured, chained, beaten, raped and even killed. We have to accept that there are problems with madrassas in Pakistan that need immediate attention.

The first step that needs to be taken is registering all madrassas with the state and bringing them under uniform standard operating procedures and curriculum, since out of all the madrassas available, only 24,000 are registered.

There should be zero tolerance for physical punishment in madrassas, especially if it is inflicted on children. These not only leave visible physical scars, but deep down, result in mental disorders.

All illegal Madrasaahs should be demolished. Although a decision to that effect was reached in December 2011, no breakthrough has so far been reached because the government is afraid of another performance of the Lal Masjid episode.

It is an undeniable fact that most madrassas, if not all, preach extreme forms of religion. This is done under the guise of religion, inciting and brainwashing children from an early age. Frequent visits to madrassas should be made by regulatory bodies to make sure they are conforming to a set standard and no incitement to violence is taking place.

At the least, all madrassa ‘teachers’ should hold an undergraduate degree. Being a Hafiz-e-Quran may be necessary, but so is being educated and civilised enough to impart knowledge to young, impressionable minds. As they say:

Unless this issue is tackled head-on, and the bull is caught by the horn, incidents like these will keep surfacing, and resultantly, put us to extreme frustration, shame and anxiety. These children will grow up with scars of the past, making them lack the sanity to live as peaceful citizens.