Virat Kohli: A boy among giants? 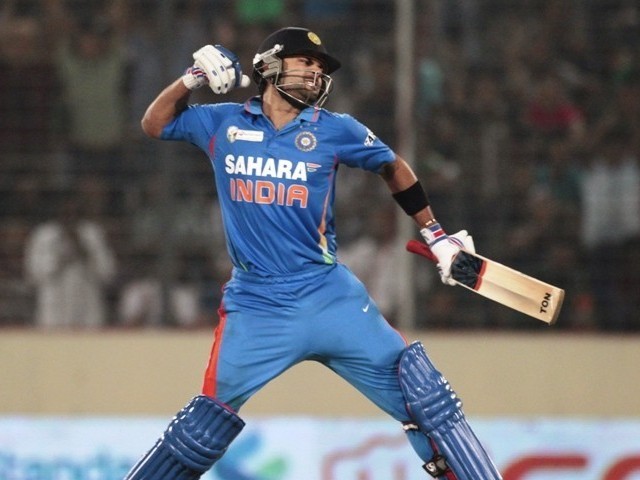 What is remarkable about Kohli's achievements is the fact that he is still at the initial stage of his ODI career. PHOTO: REUTERS

He averages over 50 runs in ODIs, has 11 ODI centuries (10 of which have come in victories), averages over 65 in ODI wins and is only 23-years-old.

Virat Kohli has not even completed four full years in international cricket. Yet, he already has achievements to boast about that some ODI greats haven’t even attained yet.

Kohli has as many ODI centuries as Viv Richards, Gordon Greenidge, and Aravinda De Silva managed in their entire careers. In addition to this, he has  scored more ODI centuries than Gautam Gambhir, Matthew Hayden, Inzamamul Haq, Kevin Pietersen, Javed Miandad and Dean Jones to name a few.

One can’t even say that he has been bashing the minnows on batting-friendly pitches as he has scored hundreds in one day matches against Australia, England, Pakistan, Sri Lanka and New Zealand both at home and away.

What is remarkable about these achievements is the fact that he is still at the initial stage of his ODI career, having established himself as a sure starter in the Indian starting XI just two years ago. The start has been so tremendous that he is currently amongst the only five batsmen in the world who have a 50+ average in ODIs.

Only in a short period of time, Kohli has shown India and the rest of the world what a vital team player he is. He is a proven match winner as can be seen with probably two of the best ODI knocks you will ever see – the 133* (86) against Sri Lanka at Hobart and the 183 (148) against Pakistan at Mirpur.

Both performances came in knock-out games, which Kohli singlehandedly won for India. However, the fact that India still didn’t make it to the finals can be put down to fate – fate that might have deserted the Indian cricket team in recent times, but has been doing wonders for Kohli.

Such is Kohli’s dominance in Indian victories that his batting average increases by 15 runs in matches that India has won. He has the fifth best average among all ODI cricketers in victories, placing him alongside the likes of Brian Lara and Michael Bevan. 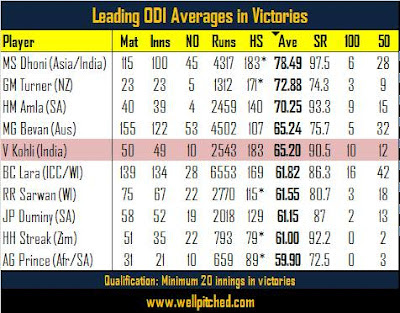 All this just makes me wonder what Kohli is capable of achieving by the time he hangs up his boots 15 years from now; the possibilities are endless.

There is no doubt that sustaining this kind of form over 10 to 15 years is something that has only been accomplished by the giants of the game, but who can deny the fact that Virat Kohli is well on his way to becoming one of the greatest players cricket has ever seen?

In an event hosted by Mukesh Ambani to celebrate Sachin Tendulkar’s hundredth hundred, Salman Khan asked Sachin who he thought could break his record and Sachin replied that Virat Kohli and Rohit Sharma were the two people who could. He probably mentioned Rohit too, but only to please his fellow Mumbaiker.