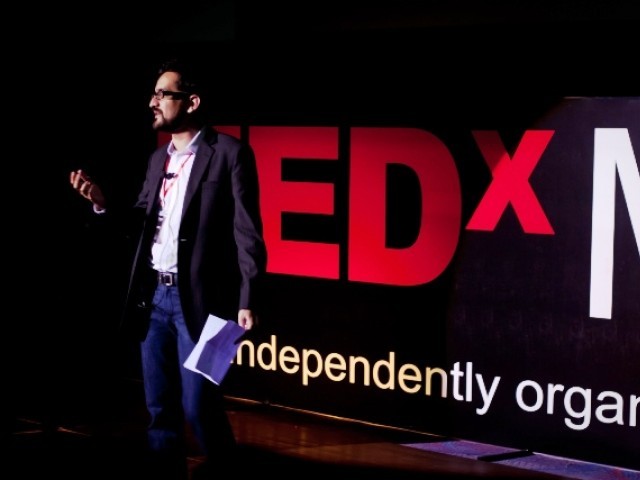 We were captivated by great speakers like Sami Shah and Asad Umar. PHOTO: SAAD HAMID

I recently went to TEDx Margalla, where the bright minds from Islamabad and Rawalpindi sat together to discuss ideas that could help change Pakistan. The event was the brainchild of two young heroes – Ahsan Mukhtar (winner of top blogger award of Pakistan in the infotainment category) and Saad Hamid – two ordinary guys with extraordinary ideas.

It was a truly fascinating experience.

TED is a non-profit organisation where people from different backgrounds come together and share unique ideas for the benefit of communities. TEDx is an independently organised TED event where local communities come together to discuss problems and carve out plans to steer communities out of them.

TEDx Margalla was an independently organised TED event. Speakers from different backgrounds joined hands to discuss the challenges faced by Pakistan, and to devise plans to usher it out of these troubled waters. The particular moot I went to was attended by the youth from the twin cities and we were captivated by the great ideas of speakers such as Dr Adil Najam (the Vice Chancellor of LUMS), Sami Shah and Asad Umar.

For me, listening to Dr Adil Najam was not only a pleasure, but an enlightening experience. He presented his idea of change in an entertaining manner and suggested that one should change oneself before changing the world.

Young speakers such as Flora Mahmood, Khalida Barohi, and Sehar Tariq also spoke about their stories and experiences. Flora Mahmood’s story was not only inspiring but also heartbreaking. She described how she had hated Pakistan so much because of problems such as the lack of security, electricity, gas shortages etc and how she wanted to run away. It was good to know that when she got divorced and was placed on the FBI’s most-wanted-list, she realised that her homeland was like her mother and that it was her duty to guide her youth.  Flora was like a ray of light in a pitch black tunnel. Her journey from being a Pakistan-hater to a Pakistan-lover was awe inspiring. I don’t have words to describe my feelings about her story; it made such a deep impact that I find it difficult to translate.

As I mentioned, TEDx Margalla was attended by a variety of young people. I came across some amazing people who had extraordinary ideas and real passion. They were not blinded by the empty words of any ex-cricketer, and their logic sounded more practical to me than Imran Khan’s mindless blabber.

I met a young man from Peshawar whose name was Muhammad Uzair. He has been enthusiastic to change Pakistan by protecting his culture, and was of the view that all cultures are part of one great Pakistani culture.

Then there were people like Asad Rafee, who was wildly passionate about technology, and wanted to build a low-price notebook for needy children that he planned to power from solar energy. It is people like these who give me hope that Pakistan can indeed see a positive future.

When I met Asad Rafee, I compared him to a zealot from the DPC rally in Rawalpindi, who was talking about wiping out a minority community from Pakistan. Interestingly, both Asad and that zealot live in the same area of Rawalpindi. How different the two turned out to be.

One young man is led astray by fanatics who think that his religious duty is to kill minorities, and fight wars against America and Israel. And then, there are the Asad Rafee’s, who speak about giving equal opportunities to the less fortunate by building notebooks powered by solar energy, and by making every educational resource available online.

I wonder how many Asads are waiting to be discovered in Pakistan! I wonder when they will all come together and change our homeland.

TEDx Margalla might not be enough, but it is like the first drop of water to make an ocean. It was not funded by hidden hands, and it has no political or religious agenda. The attendees were just curators who want to change Pakistan because they love Pakistan.

I hope to see more organisations like TEDx flourish in the country to steer it towards the desired progression; a level of progression we obviously have the capabilities to reach.

A telecom engineer from Islamabad who writes on social issues

Anna Hazare, you are not welcome in Pakistan