For the family of a dead soldier 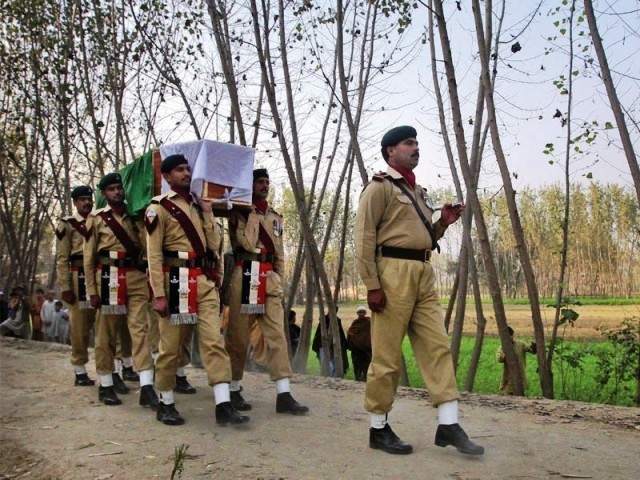 They do not deserve to be shadows of the past, or a number in the books of martyrs. PHOTO: AFP/REUTERS

Standing outside a hospital corridor, opposite the nursery, I was waiting for my wife to return from the operating theatre after giving birth to our second child. Anxiety was in the process of being replaced by happiness, and I was enjoying the quiet moment.

A few minutes later, a nurse brought another newborn baby boy, and some ladies (presumably the family of the infant) followed the nurse. One of the ladies, who looked like a typical grandmother, stood out from rest of the crowd. There was something not quite normal about her. She was relentlessly wiping away tears, saying things like,

My son is back.

At first, I thought this lady was just another over emotional,  joyous grandmother. While the rest of the family went to the room, she remained in front of the nursery window,  staring at her grandson, and repeating her chants. It was then that I heard one of the staff members tell her colleague that the lady had lost her 26-year-old son, an Army officer, a couple of months ago near Afghanistan’s border.

She was still standing near the window when someone from the family tried to convince her to come back to the room.

At that moment, in a sudden flash, she didn’t seem like a typical overjoyed grandmother any more. There was tremendous pain in those tears, and oddly enough, I felt a lump form in my throat. This same pain still resonates with me as I write this post, or whenever this episode crosses my mind.

I do not personally know the officer who was killed; I do not know if he died fighting gallantly, or was hit by a stray bullet; I do not know if he was victim to a suicide bomber – a suicide bomber whose family assumes that their father or son embraced martyrdom; I do not remember reading about him in the papers, or hearing about him on the news – or maybe I did, and I simply do not recall it because there are so many like him these days.

I am not aware of whether there is a support system in place for those who are left behind, but it is about time we as a civil society do something about it, and not just leave it to the government. The government, I believe has already done their bit by awarding these silent soldiers medals of various cadres. Sadly, in the same event  it also awarded a significant number of civil awards to phony achievers with a dubious past.

There is no way we can adequately repay these soldiers, who have silently given up their lives, for what, to be honest, is an unknown cause. They were probably just following orders, and laid down their lives at the line of duty. What we do not realise is that their death is also killing the people they have left behind.

That infant will never get to see his father, spend time with him, or play cricket with him. Imagine all the good times you spent with your father – all the special occasions that the newborn will have never have.

These men of honour deserve more than just a national holiday on September 6.

Apart from other facets of civil society, our media needs to come forward and play its role in raising awareness about what these soldiers have been doing for us. They should focus on creating respect for them  rather than sympathy.

Our soldiers deserve to be heard, celebrated, and mourned. They do not deserve to be shadows of the past, or a number in the books of martyrs. We owe them and the people they left behind more.