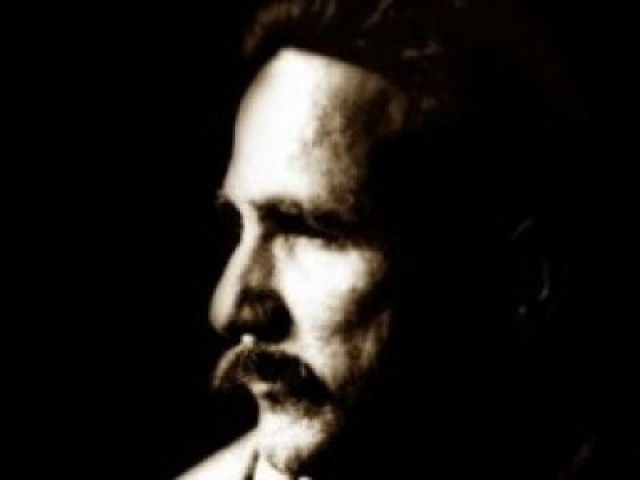 We do Iqbal no service by reducing his whole life down to one political aspiration borne of circumstances which have long since ceased to matter. PHOTO: FILE

In our national conscience, Sir Allama Muhammad Iqbal occupies that lofty post of being the first person to have conceived the idea of Pakistan. The second thing that we know about him is that he wanted an Islamic Pakistan.

Nobody has ever bothered to go beyond this simple fact to ascertain the reasons for this, and it is noteworthy that mostly we have only read about the part where he supports the idea of a separate homeland for Muslims. The official narrative has erased Iqbal’s advocacy of a unified India and presents only his later ideas.

The point of this article is not to delegitimise Iqbal’s legacy for the state he envisioned; it is merely to assert that things are never as simple as they are presented and to understand the reasons behind the demand Iqbal so passionately made. It is an attempt at providing as much of his ideas as possible in a limited space. In doing so, it also becomes pertinent to ask whether Iqbal and his political legacy are relevant in today’s Pakistan.

The fact is that Iqbal was initially in favour of a united India. He even wrote a poem extolling the virtues of that geographical region, the ‘Tarana-e-Hind,’ better known today as ‘saray jahaan say acha Hindustan hamara.’ (Our Hindustan is better than the rest of the world).

At this point, it is clear that he was a nationalist; Annemarie Schimmell even described him as a “patriot in the western sense” in her book Gabriel’s Wing: A study into the religious ideas of Sir Muhammad Iqbal.

Furthermore, he could not think about partitioning his beloved Punjab, and it was here, with a roughly equal numbers of Hindus and Muslims, that his early nationalistic poetry took on a sense of urgency. This was an era where he firmly believed that multiple religions could coexist in India “with Muslims and Hindus living side by side like brothers.” The year was 1904- one year later he would sail to England and Germany, from where he would return a completely changed man.

The vitality he witnessed there shook him. He marvelled at people who had “the confident restlessness whereby if they did not like a thing, they changed it.” He viewed the democratic dispensation of these countries very favourably, and lamented that the British did not extend the same rights to their subcontinental subjects.

He returned in 1908, and saw that all around him Hindus were being educated, while Muslims lagged behind. He noticed lingering resentment in the Muslim population as a result of the uprising of 1857, and after seeing the hypocrisy of the democratic England’s treatment of its own citizens as opposed to the citizens of its colonies, he resolved to work towards the goal of “a federal India with a strong emphasis on provincial autonomy” – a goal which would later turn into a struggle for outright freedom.

Sometime later, he also altered his original poem “Tarna-e-Hind” to “Tarana-e-Milli” in which he glorified the global Islamic community. By this time it was clear that he believed that the only way to resolve the downfall of the Muslims was to create an Islamic State, but yet again, listening to his utterances and speeches, we can only guess as to what his true vision for the new state.

On the one hand, he called pan-Islamism the “political goal of the Islamic world” and on the other, he told Hindus not to fear as Pakistan “would not have a religious rule.” By now, he also referred to western nationalism as a “sham” and “idolatry”, this being the same nationalism that, not many years ago, he championed for the subcontinent.

Thus there is no clear answer as to what his vision was, but if one looks at his speeches and his ideas in The Reconstruction of Political Thought in Islam, it is not wrong to conclude that these seemingly contradictory sayings reflect the confusion that Iqbal himself felt when he saw the decay of the Muslim community.

Even in 1927, when the Iqbal touting Islamic Pakistan had truly arrived, he had this to say:

“The talk of a united nationalism is futile. In this country, one community is always aiming at the destruction of the other community.”

This statement, more than anything else, shows his concern for the rights of the minority – in this case the Muslim minority – rather than a yearning for an Islamic state. It is also telling that Iqbal pointed out Jinnah as the undisputed leader of the Muslims of the subcontinent, even after Jinnah very publicly dismissed Iqbal’s appeals for an Islamic homeland.

The fact of the matter is that Iqbal can be used by people as varied as liberals, conservatives and reactionaries in their favour, but his ultimate abandonment of the democratic idea came about when he witnessed its true potential abroad and derided the managed version of that political ideal in India. As said before, he viewed a true democratic system quite favourably. Thus, his pining for an Islamic state, when viewed in consideration of its entire context which gave rise to this demand, becomes moot.

Additionally, two things are to be noted here: firstly, he was aware that creating a country on the basis of religion was impractical in the extreme and that such an entity could not even exist, as a religiously defined unit cannot be constrained by territorial boundaries.

Secondly, he did not see democracy as anti-thetical to Islam. When responding to Hindu fears of a potential religious rule in Pakistan, he replied by remembering the democracy of the period of the first four caliphs.

A fitting conclusion would be the realisation that an increasing passage of time always confers a certain uniformity regarding historical facts, especially when such efforts are backed by state elements – which has been the case with so many personalities in this country’s past. Allama Iqbal is but one example of this phenomenon. We do him no service by reducing his whole life down to one political aspiration borne of circumstances which have long since ceased to matter.

Did he want an Islamic polity? Yes. Is it possible he was wrong? He himself admits to this fact, even though we are not made aware of this. Do the conditions which gave rise to this demand exist today? No, neither did they exist once independence was achieved – Bangalsdesh’s creation further gave credence to this notion.

And the final question; is Iqbal relevant in today’s politics? Surely not.

A graduate of Haverford College in 2010 who studied economics.

The limits of judicial review