Singing from the heart 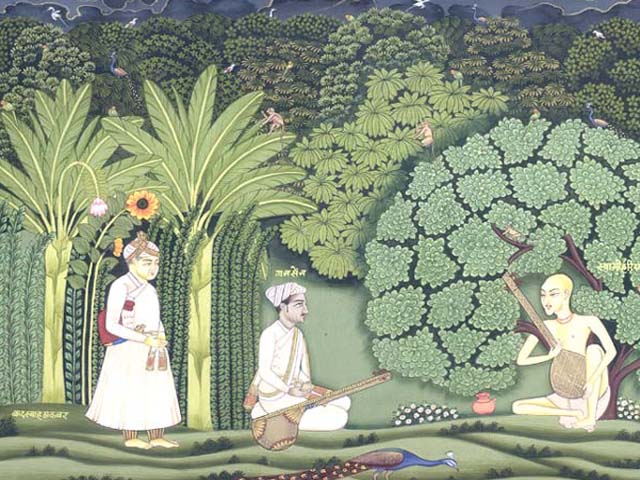 "While I sing at your command, my old teacher sings only when his heart commands him!” -Tan Sen

There is a story told in traditional musical families in the sub-continent about Tan Sen, a legendary musician from the times of Akbar the great who was one of the nine jewels of the Mughal court. It is said he could cause rain clouds to appear and disappear through the exposition of his raags.

The heart does not sing for gold

The story goes that one day, after listening to the rapturous music of Tan Sen, Akbar asked him if there was anyone in the empire who could match his musical talents.

“There is one, my Lord, who not only matches but indeed surpasses me in music,” answered Tan Sen.

“Is it possible?” burst out Akbar, “then let him appear before me this instant to prove himself!”

“Nay Lord,” said Tan Sen, “For I speak of my venerable teacher, Haridas Swami, who has now retired from worldly life and lives a humble existence in his hut by the forest. And since he is a darvesh, he answers to no king, but only to the highest of authority. And those who wish to hear him, must go to him!”

Akbar had a soft spot in his heart for Darveshis, and he decided that it would be best for all if he was to disguise himself as an ordinary villager and visit Tan Sen’s master discreetly.

When Emperor Akbar arrived in front of the hut, Tan Sen knocked on the door.

“It is I, Tan Sen, and with me is a friend who wishes to hear you sing!”

“Go away!” shouted the owner of the hut, “I am in no mood for singing or receiving visitors!”

Tan Sen came up with a strategy. He started singing a certain raag he had learned from his teacher, and at one point made a deliberate mistake.

No sooner had he done this when sure enough, the master started singing the same raag from inside his hut, correctly, and once he had started, he continued to sing.

Both Akbar and Tan Sen stood enamored outside the hut as the magic of the sublime music began to take effect. The stars shined brightly in the sky by the time the recital had finished and they were able to leave.

Once they were back at the imperial palace, Akbar asked Tan Sen, “Why is it, my friend, that, though you are renowned throughout the empire, and all bow to your musicial talent, yet I have never in my life heard something so moving even from you?”

“The reason for that, my king,” said Tan Sen “is that while I sing at your command, my old teacher sings only when his heart commands him!”

The Sufi Tradition and commercialism

This story illustrates beautifully the relationship between society and the truth. There has always been a place in the sub-continent for the sages who have spoken the truth uncompromisingly. This is the root of the music, which we call ‘Sufi proper’.

It was about 10 years ago that I accepted that music was a calling. In the beginning there I felt an impatience. Now that I had taken it on as a mission I wanted to know how to proceed next with my music. The only thing that I had to hold on to was the edict – that if one follows one’s own heart, then with time all one’s needs (spiritual, emotional, physical, material etc) will be taken care of.

But the heart is a wayward thing. Sometimes it follows one inclination and sometimes another. During this journey I realised that what one justified as the desire of one’s heart often lacks permanence and dissipates as soon as it is fulfilled. Yet there are moments when one knows that a step in the right direction has been taken, that a distance has been covered. And nothing can take away the joy of that moment.

The producers of the Coke Studio project realised the huge potential of Sufi music and poetry, and based this season around the Sufi. Even though, for me personally, it will always be a deeper experience when I go and listen to say, the Shah Jo Raag Faqirs of Bhitshah, at the shrine itself; (this by no means lessens the Coke Studio experience.)

When I was asked by Rohail Hyatt to come up with a recitation for this year’s Coke Studio, instead of a song, at first I was slightly disappointed, because even though I have had some theatrical background, I have always looked upon myself as more of a musician than a speaker. But then I remembered a piece of poetry by Baba Bulleh Shah, ‘Munh Aayi Baat Na Rehndi Aey’ – “What is in my mind must be said”, which in spite of several attempts, I had been unable to compose, and which I consider to be pertinently relevant to our times.

Playing the poetry of the past

My experience has been that if one does anything with confidence on stage, a certain amount of people will always be ready to appreciate it. There have been times when I have not enjoyed my performance, yet some people have always come up to me, impressed. And there have been other times, those cherished moments of every musician’s life, when no one needs to come up and voice their appreciation; it is enough that I know I have delivered, been swept over with a wave of inspiration, have fulfilled and been fulfilled.

For my Coke Studio peformance, I ended up choosing two pieces by Baba Bhulleh Shah that I combined for the song. I thought that the ending should be a little more provocative and direct, so at the end of the longer poem, I added the line:

This admonishment added a practical conclusion to the song that is otherwise more philosophical.

Society is always pushing and pulling an artist towards this direction or that. The journey of an artist consists of listening to, honing in on his or her inner voice and following it with conviction.

Here I am reminded of something that Fareed Ayaz Raziuddin Qawaal once said during one of his soaring recitals:

“Jabb ishq junoon hadd se baahar nikal jaaye to beemari hai, aur jabb hadd ke andar rahe to hai adakaari!”  or “When the passion of love exceeds its boundaries, it becomes a disease; and when it stays within its boundaries, it is fake!”

To find the balance of the social and the individual, mind and heart, art and craft, spiritual and material – is the eternal battle of the dedicated artist. Those who have succeeded in this are those through whom art is created, thry can truly make a difference to life as a whole.

A Sufi musician who likes the quiet in Croatia where he lives and works on his music. He has released one album inspired by the poetry of Sarmad Sehbai, Khawaja Ghulam Farid and Baba Bulleh Shah, and is working on a second one, which is a collaborative effort with musicians from across the country.