Is Shahid Afridi above the law? 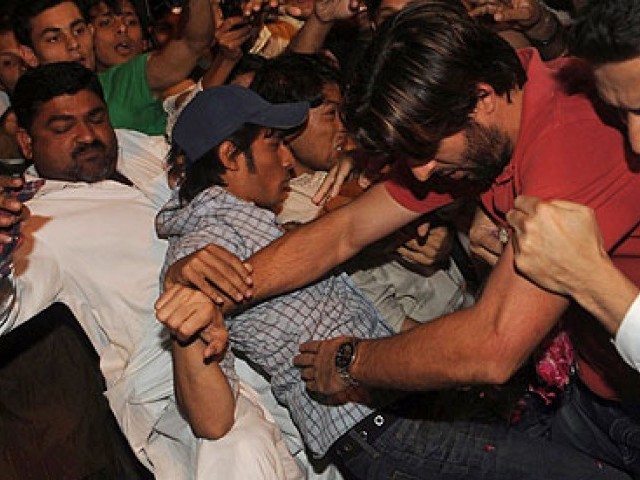 Afridi’s annoyance at the incessant pestering of his supporters is justified in this vein, and the fact that his daughter was actually pushed to the ground compounds upon this. However, this does not change the fact that Afridi physically assaulted a fan following the episode; a fan who was not responsible for his daughter’s accident. PHOTO: AFP

I joined in, wholeheartedly, as millions of Pakistanis rejoiced over our recent triumph on the cricket ground against Bangladesh. In a nation where cricket is followed with religious fervour, it is no surprise that cricket heroes like Shahid Afridi are exalted to the level of saints.

This may be the reason Afridi’s recent outburst, at the Karachi Airport, was swiftly brushed aside as justified, with no official follow-up save for a brief statement issued by the cricketer that implicitly condoned his actions.

The public’s acceptance of his actions is disturbing to say the least.

Granted, Afridi’s consistent contributions on the cricket pitch are worthy of much adulation, however, they simply cannot grant him immunity from the law.

While the media ran overly sensationalised clips of the incident, complete with a dramatic background score, the entire focus was devoted to the incident itself, while the repercussions were completely overlooked. But can Pakistan really afford to let another high-profile incident like this escape the law?

I may not be able to relate to Afridi’s position, as that of a father concerned for his child’s safety, but I can sympathise nonetheless. There is no denying the fact that in the absence of adequate security provisions for the national cricket team’s return, the enthusiasm of the supporters awaiting their return was overwhelming to say the least.

In light of the situation at hand, it is only natural for a father to want to protect his daughter.

Afridi’s annoyance at the incessant pestering of his supporters is justified in this vein, and the fact that his daughter was actually pushed to the ground compounds upon this. However, this does not change the fact that Afridi physically assaulted a fan following the episode; a fan who was not responsible for his daughter’s accident.

In assessing whether Afridi’s actions were reasonable, it is pertinent to first question why his daughter was there in the first place and if it was really reasonable for Afridi to have expected an outcome that did not involve such an incident. To send a three-year-old girl into a sea of fervent cricket fans may be seen as contributory negligence upon the part of the adult who sent her to receive Afridi from the airport. Any reasonable individual, aware of Afridi’s popularity, would have been well aware that Pakistan’s recent victory would attract his supporters to him in throngs like moths to a flame.

Was it really a wise decision to send a little girl into such a situation?

It may seem unreasonable to claim that a little girl should not be allowed to receive her own father from the airport, but with a father of Afridi’s level of popularity, this case is an exception, and not the rule.

Even if such circumstances were found to be safe for a three-year-old little girl, we are still left with the question of whether Afridi’s response to the incident was reasonable. This obviously, is not for us, but for the courts to decide; however, this matter will never reach the courts as not so much as an FIR was lodged.

To simply dismiss his actions as justified on account of the fact that his daughter had been pushed to the ground is to take the law into our own hands and use it only as we please.

At the heart of Pakistan’s problems, lies the recurring tendency to apply the law only when it is convenient. If it were a foreign diplomat (not unlike Raymond Davis) in Afridi’s position, the entire nation would erupt in uproar, but Afridi’s fame and acceptance as a national hero seems to have granted him some sort of shield from the law.

For such an incident to go by untouched by the arm of the law, in spite of its mass media coverage is to set a precedent that will be absolutely detrimental for our society. With the position that popular figures like Afridi hold in our society, comes the added title of role model for younger generations.

While Pakistan will still be grateful to Afridi for bringing back the trophy, are we willing to teach an entire nation of millions that such acts can just pass by without retribution if you’re famous?

The author is a first year student of law at the Lahore University of Management Sciences. Hiss topics of Interest include Philosophy, Environment, Law and Satire. He tweets @OrganicOpinions.