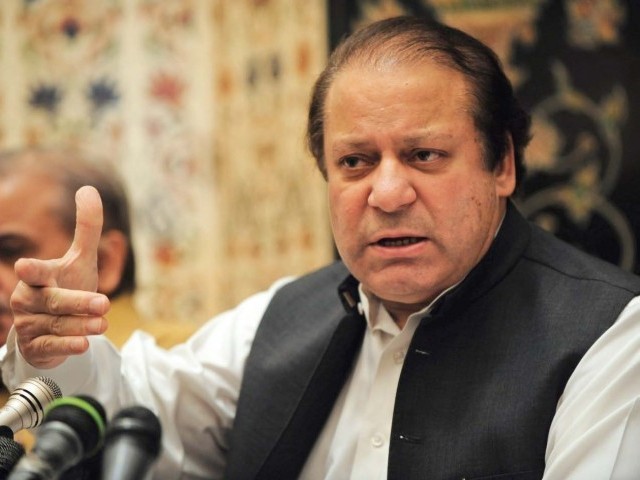 Please tell me Mian sahib, are you a Punjabi or a Kashmiri? Mince no words and answer that! PHOTO: AFP

Once, when George Bush was sitting in his plush chair with lights illuminating every nook and cranny of the White House, he asked Musharraf – yes the one who dethroned you when your delusional state of mind made you believe that you were the next Khalifa of the Ummah (Muslim nation) – a question very similar to the one I have for you today.

“Whose side are you on?”

“Your side, Mr President,” replied Musharraf, loud and clear without giving it a second thought.

I am no George Bush and unlike him, my house is in doom and gloom because we have been sitting in the dark for the last three hours. I do not have the luxury to pick up the phone and call the people who matter in this country. My only hope is that my ramblings are worth printing. The common denominator between George W Bush and I is the question that was put up to Musharraf.

Mian sahib, whose side are you on?

Like most gullible Punjabis, I would have accepted these war-like black-out conditions as fait accompli had I not taken a trip to Karachi last week.

I arrived there in the middle of the night, not by the night coach, but by a late night flight in order to watch the final of the Asia Cup, and saw that the entire city was lit up like a jungle fire. I won’t trouble you with the trivial details of being stabbed in the heel by a PIA plane and that by the time I reached home my Peshawari chappal (slipper) was drenched in blood, because a common man’s blood is of no consequence to you or any other cold-blooded politician for that matter.

The place I was staying in was at Shahrah-e-Faisal, right in front of a multi-story bank. I will not waste your time with the details of getting first aid administered to my wound, but I would like to inform you that when I went upstairs to the designated bedroom, I was appalled to see that at 2:30 in the morning, the entire building without any occupant was glittering with lights, forcing me to draw the curtains to get some sleep.

The next two days were no different; the uninterrupted electric supply with minor hiccups every now and then got me thinking, what is it that Karachi has and Lahore doesn’t? And I realised it was Altaf Hussain.

The realisation however made me question, why not? Why don’t we have a nationalist like Altaf Hussain and I had a rude awakening with an answer that slapped me in the face.

Altaf Hussain has no intentions to be the king, or prime minister, if you please. However you sir, on the other hand, have been only trying to regain your lost throne – which by the way was whisked away from you because of your own follies.

I am a Punjabi, not by chance or forced migration which applies in your case, but a proud descendant of long chain of Punjabis who resisted marauders from Alexander to Abdali.

I realise that I am drifting and the subject at hand is yet to be solidified, but as I sit here in the dark, and write in the glow of my laptop screen light, I have vowed that I will not let you off the hook so easy.

Please tell me Mian sahib, are you a Punjabi or a Kashmiri? Mince no words and answer that!

Next question sir: please quote one public gathering where you addressed the people in Punjabi, when I know a lot of national leaders, including the self-proclaimed heir of a lost dynasty, who address people in their mother tongue dressed in traditional Sindhi garbs.

Now comes the question that Punjab being the springboard of your political supremacy, why are you not coming clean about its division? Would you follow the footsteps of your Kashmiri compatriot, Nehru, who in order to wane Punjab’s dominance found it expedient to divide it into three states?

And lastly sir, coming to the core of this invective, other than issuing statements about illuminating the streets of Punjab, what course of action, have you or your self-styled philosopher of a brother devised to steer Punjab out of this quagmire?

The Rapid Bus Transport system, flawed fly-over, an underpass here and an underpass there will not help my children overcome this psychological trauma that loadshedding is just another part of life, like skinning a knee or being robbed at gunpoint. Yes, people are robbed in Karachi, there is kidnapping for ransom and target killing but that has been there for a very long time. One thing missing from this laundry list is excessive loadshedding.

For the last four years you and your brothers have given nothing to this province other than lip service. The same lips that hardly moved against the prime minister who was parading around this province talking about its division. On the other hand the entire interior Sindh came to a halt after the graffiti about the division of Sindh was seen in the streets of Karachi.

Mian sahib, it is time to put your money where your mouth is.