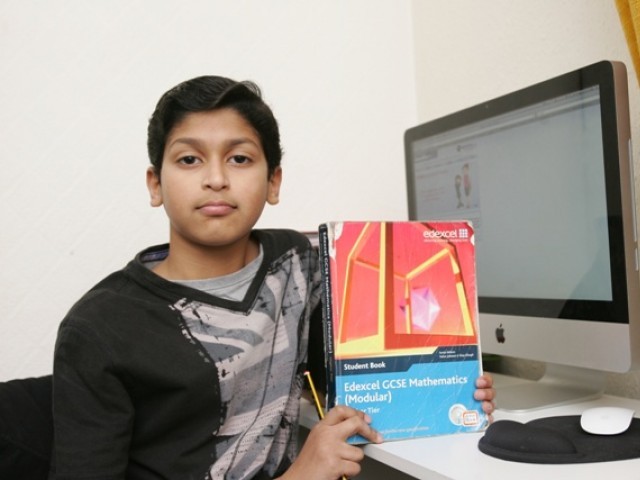 “I want to be famous!”, says Umair, and I quietly think to myself that if he continues what he’s doing right now, very soon he will be! PHOTO: ANAAM RAZA

Child prodigies are an eclectic bunch; being  on the fast-track in the lane of life at such a tender age makes them so. Although, some go on to commit suicide, turn to crime and develop drink and drug problems, we remain irrevocably fascinated by them.

We are overcome by their childhood achievements and allured by the fame and recognition they bring to the family. Secretly we wish in the depths of our hearts that our children would also do the same.

However, what we fail to realise is the immense pressure that these kids are put under, the long hours that they spend studying and the sheer mental resilience and focus they develop to make their parents proud.

One such little boy who wants to make his daddy proud is Umair Liaquet. Born in a small village in the city of Sargodha, he came to England seven years ago when he was just three.

The bespectacled Umair is quite amused with all the attention he’s recently been getting. His local paper, Newham Recorder featured him on their front page two weeks ago, and now he is getting ready to be interviewed again.

Umair’s claim to fame is that he’s a math whiz. Last month, the 10-year-old sat his Maths GCSE higher tier exam and achieved an A. He scored an A on an exam which most students sit when they are 16-years-old.

Unlike his peers, he not only sat the exam five years early, but also plans to sit the A-level exam next year too so he can get a place at the University of Cambridge just like Arran Fernandez, the 15-year-old boy who became the youngest student at the prestigious world renowned university.

But just like the majority of Pakistanis he too wants to be a doctor or an engineer. He explains this with a glimmer in his eyes saying,

“I think I want to be an engineer because I like to use my imagination and find out how things are built. But I could become a doctor too because my dad wants me to be one.”

To this Umair’s father said,

“This is just a desire I have, as there is no one in our family who has ever become a doctor.”

I ask him how he feels about all of this, and he tells me that he felt tense when he went to the exam hall.

“I did feel a little awkward and nervous there because there were so many older people, and I was sitting all alone because I was an external student”

And I immediately know that I just witnessed the more vulnerable side of this boy – the little child hidden beneath the worldly brilliance.

Umair had to sit this exam externally because his own school did not allow him to take this plunge. So his father and older brother took him to Brampton Manor Academy.

But here is the twist to this heartfelt tale.

Umair plays PlayStation non-stop for eight hours a day; from the minute he comes home from school till the second he goes to bed.

“We certainly would not have known about his god-gifted talent had it not been for the PlayStation,”

“I was worried that he plays on this machine as if he’s an addict. I just wanted a cure for his addiction.”

His father explained how he would scold Umair for playing video games day and night and severely instruct him to complete his work. To which Umair would reply,

“I would give him two exercises to finish off and he would come back and show me that he’s done two chapters,” says Aqeel in a proud and chuffed father’s voice.

“One day I was explaining polynomials to his sister, and she was having difficulty understanding and grasping the concept and along he came and explained and solved everything for her in no time at all.”

“If I prohibit him from playing, he becomes furious and does not speak to anyone. And since his mother is away in Pakistan, this makes me feel even sorry for him!”

Umair’s extraordinary abilities could also be attributed to genetics.

His father, Aqeel, an electrician in the UK is a double Math and Physics graduate who comes from a village where there were only two men who went to university. Umair’s older brother Hamza is also a scholarly virtuoso who is taking five A-level exams and aspires to become an aeronautical engineer from Cambridge.

I notice several instances when Umair does not seem very different from the young boys of his age. For instance, when he shows me the dire state of his book. Like most 10-year-olds his books are as messy as they can possibly be; they are completely and utterly inscribed in pen markings and every single page is dog-eared.

Or when his brother tells me how much Umair loves cats.

“He will stare out of the window for hours as if the cat is his girlfriend,” says Hamza trying to embarrass his younger sibling,

“And if he gets late for school, then we know that he must be lingering around some cat he has encountered on his way there.”

He tells me that he loves playing Borne Ultimatum, Modern Warfare, Call of Duty and FIFA. But when his father tries to stop him from playing some games, reminding and citing the age restrictions he blackmails him and says,

“Even the advanced exams were not for my age!”

I am intrigued at how he copes at school. But Umair does not seem troubled at all.

“My school teacher does not ask me any questions because she knows that I’ll already know the answer. And my friends don’t think I’m weird instead they just ask me to do all the questions for them,” he exclaims in that excited tone once again.

And I quietly think to myself that if he continues what he’s doing right now, very soon he will be!

A Journalism and Economics graduate who hasn't decided which way to go. Anaam tweets @AnaamRaza.