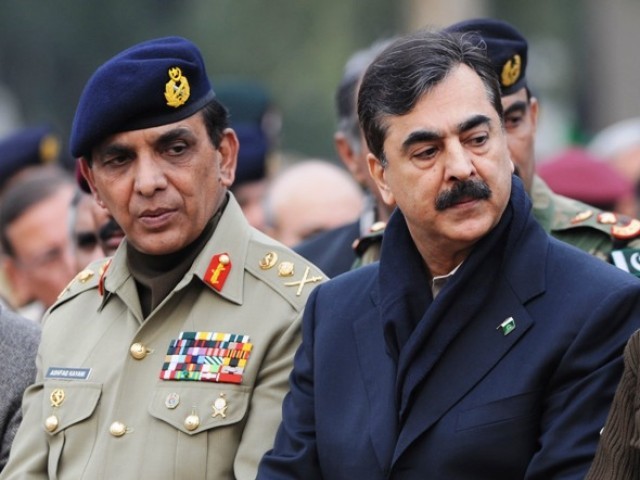 As long as politicians lack vision and remain stuck in the realist power politics of elections, the vicious cycle will not allow them the liberty to think beyond their constituency. The result of which will be the army taking up the role of policy maker yet again! PHOTO: AFP

It is difficult to assess whether the Pakistan Army is naïve or strategically calculated to step in the Supreme Court on the Memogate scandal. Obvious, however, is the fact that the critical step has brought the Army out in public, where previously only politicians and bureaucrats were mocked and sorted out.

The Pandora’s box has popped open and an influx of articles criticising the unlimited power of the armed forces on defense, foreign and domestic political policies of Pakistan have been unleashed.

While political pundits have declared the notion that the army makes the foreign, defense and domestic political policies of Pakistan as a ‘fact’– one must question if the army has taken up this role itself or whether it been forced upon the institution.

The answer to this question is pertinent for a holistic understanding regarding why the Pakistan Army has become a dominant force in Pakistan.

Is it the failure of the political system or has the army, for its own survival, intervened just to cause the system to fail so as to justify their influence?

To answer the question let’s take a look at the facts on the table.

Politics is a complex art which requires two broad characteristics:

Can it be reasonably claimed that any political leader of Pakistan possesses both these characteristics?

Thus, the will to do good for the public is all that is needed from a politician — not a university degree. Policies are in fact made by bureaucrats and ratified as law by the politicians.

So what went wrong with the politicians of Pakistan?

The fundamental problem faced by them is rooted in the democratic parliamentary system of elections.

Politicians lack the will to do good for the public because they are bogged down with securing the electoral seat for the next elections–and the only way to do that is to use the influence and power accompanied by a parliamentary seat to make more money, return favours to people more powerful than them and most importantly, play with the bureaucracy by having their ‘yes men’ promoted to key positions.

This is a classic example of power politics in a Hobbesian world, where the perpetual accumulation of power secures your current power status. However, in the case of Pakistan it has lead to an inefficient and incompetent bureaucratic system that serves the interest of the politicians and guarantees promotions based on loyalty to politicians — not based on their performance.

In essence, the role of bureaucracy as the guiding vessel of Pakistan has completely collapsed and become irremediable with political inclinations.

In such a scenario where both the politicians and bureaucrats have forgotten their respective roles in running the state, someone has to make ‘some’ policy to take the country somewhere – anywhere.

It’s at this point that politicians have historically turned to the army, to do what appears to them as the ‘tedious paper work’. While politicians keep themselves busy in power politics and securing their respective seats, the army is bundled with the task of making policy.

The Pakistan Army being a little more organised, educated and self-sufficient, works out a policy plan, sends it to the respective members of the cabinet or the Parliament, who having little intellectual or practical interest in the defense, or foreign policy, accept it without any critical examination.

It is at this point that the politicians target the army and place on it the blame for interfering in the policy-making process (reference: the Kargil War). However, it doesn’t end here. Politicians have also used the army for their vested interests when it came to weakening the opposition or inviting a coup. Now the very same failed politicians who once blessed the army’s interference in policy-making, now criticise its role.

There is little denial that the army plays a role in politics.

But the important question for the public to ask is: has it taken up this role itself or was forced it upon it? Have the politicians learnt something or will they, again, use the army to make policies?

The answer is that as long as the politicians lack vision and remain stuck in the realist power politics of elections, the vicious cycle will not allow them the liberty to think beyond their constituency.

The result of which will be the army taking up the role of policy maker… yet again!

Recovering my stolen car from the police

Can Mother Teresa, a non-Muslim, go to heaven?

Back in Pakistan and loving it!