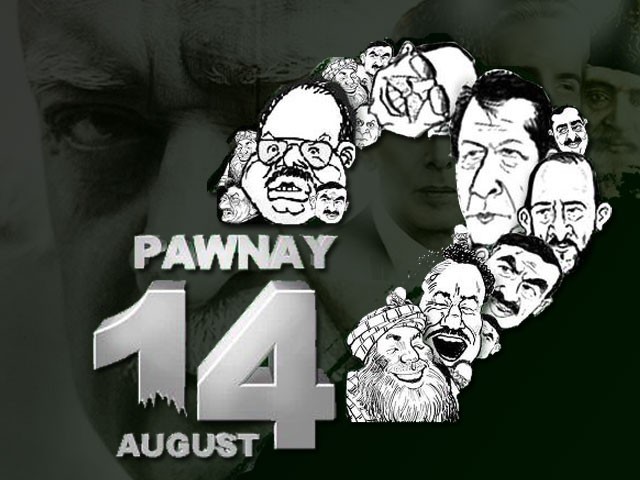 The magic that Anwar Maqsood can weave with his pen, which switches effortlessly between literary, political, show-biz and at times even cheesy jokes is mesmerising. The pen knows no bound and with an equally effortless stride switches between satire, political commentary and thought-provoking lines. PHOTO: File

A theatre play about Pakistan, revolving around the theme of August 14 which sports characters like Quaid-e-Azam Mohammad Ali Jinnah, Dr Allama Mohammad Iqbal and Maulana Shaukat Ali Johar does not sound like your average musical advocating freedom of sexual orientation – and thus, it perhaps does not warrant the same media attention.

Even I would not have attended it had it not been for a violent strike that paralysed the city and left me looking for some aesthetic relief. To my surprise, I was told that the play is not only running but pulling packed audiences. I was lucky that I got the pass, which only happened because the turnout was slightly lower due to the strike.

But where are the rave reviews?

Why is there such a media silence in what is probably one of the best plays that has been on offer in the past four to five years?

Nothing that I have seen in this time was more relevant, intelligently written, passionately performed and hysterically applauded by the audience. I know one man who walked up to Mr Anwar Maqsood after the play and told him that never in his life had he cried while simultaneously laughing aloud!

Such is the magic that Anwar Maqsood can weave with his pen, which switches effortlessly between literary, political, show-biz oriented and at times even cheesy jokes. The pen knows no bound and with an equally effortless stride switches between satire, political commentary and thought-provoking lines.

In one particular dialogue, the Quaid-e-Azam counts the resources and beauty of Pakistan and Allama Iqbal interjects by asking if the Quaid was listing Pakistan’s blessings or reciting Surah-e-Rehman which talks about the bounties bestowed upon mankind by the Almighty.

The Quaid, with moisture in his eyes, replies that

Pakistan was indeed Surah Rehman itself!

There were many glistening eyes that watched the play, wept and laughed out loud. The law and order situation prevalent in the city on the day was very relevant to the overall mood of the play and put it in the right perspective.

The play is presented by KopyKats Productions and has been directed by the young talent Dawar Mahmood, who was assisted by Sher Ali Minallah. The play, which on the surface is hilarious, has deeper layers and discusses some of the most painful events in the history of this country.

Absence of media coverage and reviews in the popular press is not just disheartening but utterly confusing.

The author is a Finance and Audit professional presently working for a bank. In his free time he enjoys travelling to remote areas in Pakistan, outdoor activities such as camping, trekking, hiking, fishing, boating and riding etc.

Please don’t close down the zoos