I’m a Pakistani marrying a gora 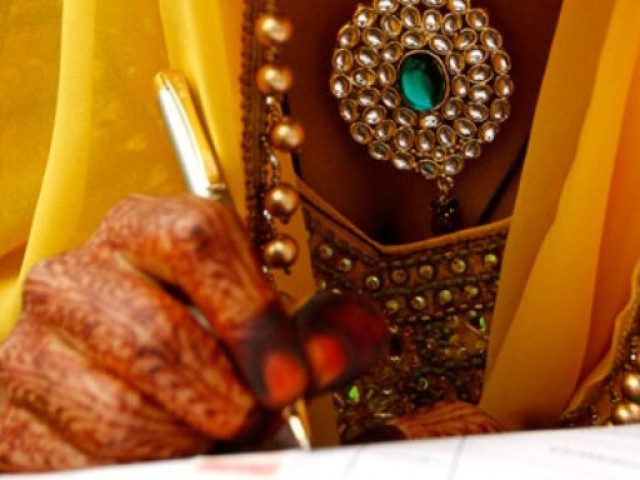 I have found someone who values not only me and my family but also my language, my culture - everything that was previously foreign to him. PHOTO: REUTERS

The past 10 days have been very eventful for me – no, scratch that-  they have been momentous; I received some excellent news about my future, went on a wonderful business trip to the sunny state of California, and yesterday my gora (foreigner) best friend asked me to marry him.

I said yes, in case you were wondering. Yes, I am the other half of an interracial couple.

The funny thing about being in an interracial relationship is that in a world where everyone is always talking about race, that’s the last thing on my mind when I’m with C. To me, he isn’t a white man and me a brown woman. He is my best friend who understands and loves me. That’s it.

To think that there are people out there who consider us to be some sort of an abomination really amazes me. Keeping that in mind, race tends to rear its head in almost all other situations.

C and I come from totally different worlds– two worlds that, when we are together don’t matter much, but when we step out of our little bubble, is swarming around us. I am a Pakistani-American and he is a born and bred Caucasian American. His family is Catholic, mine is Muslim.

Each of those things represents a lot of differences. However surprisingly, they have all come together to create a really great and compatible ‘us’.

Over the past few years, I have been watching C trying to understand my culture, and it has been an entertaining and fascinating journey. I won’t lie, the journey part has mostly been from his side, I tend to sit back on the sidelines with amusement and adoration, watching him stumble around my family trying to figure out what’s the right way to eat something.

However, after four years I have learned that it doesn’t matter how he eats my mother’s chicken biryani – hands, forks, spoons, with yogurt, without yogurt, or even with naan (flat-bread) *the horror*- what matters is the fact that he enjoys eating it.

Who cares that he sounds silly when he tries to pronounce things in Urdu, all I care about is that he doesn’t get mad when we laugh at him for sounding funny in the first place. He understands that my family is loving and if they are making fun of him, it means they consider him as one of them.

He also understands that I am very close to my family and that I will try to see them as often as possible, even if it means going to their place once a week, and while he may not join me every time, he appreciates my longing for my family and tries to accompany me whenever he can. Most of all, through all the changes and things to adjust to, he is a man who has no qualms converting to Islam because he knows I would never marry him otherwise.

Growing up, I never thought I would end up marrying a white man. My best friends, however, disagreed. According to them they always knew that I couldn’t marry a Pakistani – apparently I was always too “Americanised”. However, what I have learned over the short span of my life is that our skin colours ultimately don’t matter.

What is important is whether your significant other cherishes you and your family; in C, I have found someone who values all that and along with it also my language, culture and food – everything that was previously foreign to him.

Now he sits at our family dinner table and prefers more spices in his food than my father and laughs with my mother on one silly joke or another. He joins in when we tease my sister and laughs just as hard as us when my five-year-old niece accidentally ‘fur-furs’ (Arabic for err… passing gas).

I believe I have found a keeper and I don’t care if any one thinks other wise.