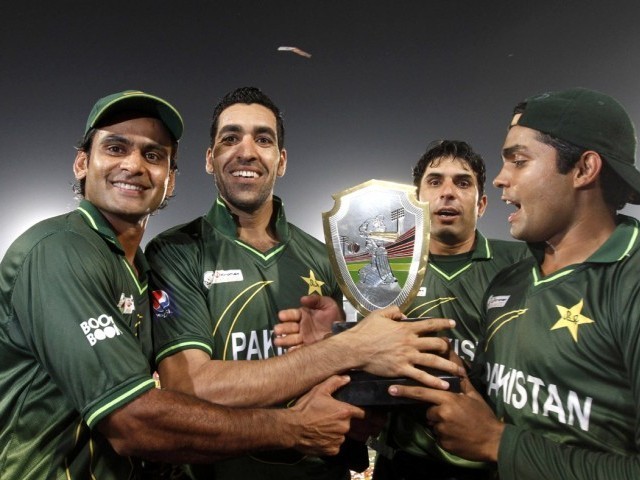 Some declared that we were going to lose this, some weren't sure and some cheered Pakistan on. I looked on intently and believed that we would pull off a victory. PHOTO: REUTERS

You’re sitting at the office  swamped with work and don’t want to do it – it’s the usual mood before a long weekend. Add to it the opportunity to watch Pakistan battle it out with Bangladesh for the crown of the Asian championship, and you have people just willing the clock to strike five.

It was in this mood that we sat in the lunch area streaming the match live at around 1.30 PM on Thursday. During that passage of play, Pakistan lost two cheap wickets. Some declared that we were going to lose this, some weren’t sure and some cheered Pakistan on. I looked on intently and believed that we would pull off a victory; I knew that almost every time Pakistan plays a big match, one or the other player gets the job done.

Pakistan’s situation didn’t ease up and we were soon six down for 133. At that moment I logged onto Facebook to lament Akmal’s dismissal and how the umpire got it wrong. That is when I saw my friend’s status that read:

Let’s see how many “cricket lovers” hate on the team before we eventually win today.

How true and disappointing. There are so many so-called cricket fans who have no faith in the team. The same ones that declare their support for Pakistan when the teams wins. When a friend said that “this is what happens” when we boast about winning a few matches, I told her in true Bollywood style: “Picture abhi baqi hai.” That is when Afridi changed the game.

The batting power-play was on and with some lusty blows, Boom Boom raced to 32 off 22 balls and gave the batting some much needed momentum. From there, Sarfaraz Ahmed took over and ensured that we reach 236 and bat out the whole 50 overs.

When Bangladesh came out to bat, Tamim Iqbal played like a man on a mission. His fourth 50 of the tournament threatened to take the game away from Pakistan as it had from India and Sri Lanka. But our bowling lineup was not as weak as theirs.

Spinners pegged the run-scoring down and when Tamim departed, the score was 81 for three off 23 overs. I was watching this at a coffee house with a friend. It was fun watching the match with her as she kept saying that Bangladesh would win and I kept drawing attention to the wickets that we were taking.

I left soon after, and upon reaching home discovered that Bangladesh were 120 odd for three at the end of 34 overs. An interesting finish beckoned. Shakib’s 50 kept the Bangladeshi hopes alive and when he was dismissed, 58 more runs were required. Mushfiqur Rehman came to the crease – the man who won the match against India with some amazing hits over the rope. But, he couldn’t repeat the heroics and was soon sent packing.

Bangladesh kept inching closer and the equation came down to 19 off two overs and then nine off the last. With four needed off one ball, Aizaz Cheema bowled what was perhaps the defining delivery of his international career as Shadat Hossain could only take one run. Pakistan won by two runs, becoming the champions of Asia for the second time.

While Afridi was declared the man of the match, the honour would have been conferred upon Shakib Al Hasan had Bangladesh won.

Having recapped the event, I must say that the Bangladeshis played with big hearts and won millions of fans around the globe with four scintillating performances throughout this seires. Perhaps, the pressure of playing a final got to them as they faltered just short of the finish line of an otherwise great performance. This was their second appearance in a final.

Pakistan, on the other hand, did what it does best. They found players who could win the big moments and lifted the cup at the end. I was just happy to see the cup come home; happy to see the naysayers silenced. You live by your team and you die by it!