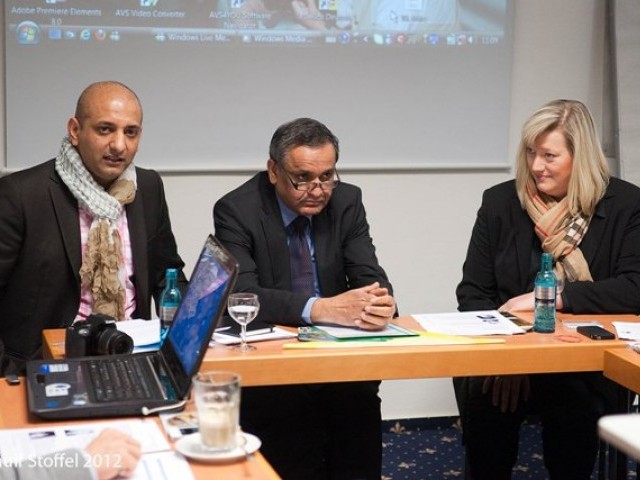 Every year one or two groups representing the German Journalists Centre visit Pakistan on a trip sponsored by the Pakistan Embassy. Information such as the aim of the visit, its outcome and the selection criteria is, however, kept confidential.

Before their departure, the group is introduced to the history and culture of Pakistan, along with the ongoing developments in the country, the serious challenges they can face while there and ways to handle them.

Recently, Mr Mazhar Javed, the acting ambassador of Pakistan in Germany, accompanied by Mr Ghulam Haider, Press Counselor Pakistan Embassy Berlin, briefed a group of such journalists who are scheduled to visit Pakistan sometime during the end of March to the beginning of April 2012.

As is the norm in such formal meetings, a documentary was displayed on a beamer containing details about the area, the population and political system of Pakistan while relations with Germany, bilateral trade activities and high profile visits between both the nations were also highlighted.

It was revealed that 150,000 soldiers man the western border of Pakistan to guard us against terrorism with 900 military posts. In comparison, Nato comprising of 42 countries, mans 112 military posts. With a lot of pride, the audience was also informed that 17,742 terrorists have been either killed or arrested up till now while 6,600 Pakistani soldiers have lost their lives; 19,919 have been seriously wounded.

As the acting ambassador informed the listeners that around 3,500 bomb blasts have rocked Pakistan post 9/11 (300 of  them suicide attacks)  he was honest enough to accept that the reason behind the worsening international image of Pakistan was the presence of terrorism in the country.

As was expected, the ambassador was bombarded with several questions after the presentation, such as why the embassy doesn’t update the German press with latest efforts, why the Pakistan army and ISI are accused of supporting specific factions of Taliban, how women are treated in Pakistan, and why the human rights situation of minorities keeps worsening in the country.

A very interesting question which was raised was how much freedom the visiting journalists will have to make their own assessment of the situation, since it is a program sponsored by the Pakistani government with chances of journalists being taken to only those places that will represent Pakistani in a positive light.

The responses to this question were shaky and based on circular reasoning; in each reply the argument was given that the negative image of Pakistan is only the opinion of writers, having no bearing with the facts on ground.

Later, many journalists showed their dissatisfaction with the diplomatic chief representing Pakistan for not accepting the truth. It appeared from his briefing that either he wasn’t fully prepared for the event or lacked the latest knowledge about his country.

There is no doubt that the data comprising efforts made by Pakistan to combat terrorism was impressive, but it would have been better if the presentation contained a full analysis of the existing situation and solutions to the existing problems instead of just statistics.

Though it is a commendable effort by the Pakistan Embassy to sponsor foreign journalists to visit Pakistan and observe what’s really happening there, one cannot ignore the negative aspects which worsen the international image of the country.

Later, Mr Shamsul Haq Qudoos, a recognised journalist of Pakistani origin from the German Journalists Organisation, also the head of the South Asian desk in Germany and the main force behind this project, tried doing some damage control by playing two videos which depicted both the positive and negative aspects of the country. Efforts were also made by other Pakistani journalists namely Mr Qamar Ata, Muzaffar and Mr Irfan Khan who tried enlightening the group with more details during the dining table discussion. One has to wait for the visit now and see what the outcome will be.

The issue which needs immediate attention is the proper working of Pakistani diplomats in other countries. It appears that they were more eager to accompany the consul general of  Frankfurt rather than giving company to the journalists.  Germany is an extremely important European country and in my opinion, the diplomats should have stayed for the whole duration of the briefing event.

It is a tragic fact that these diplomats give their personal agenda priority over their job of representing Pakistan, an unfortunate phenomenon which has engulfed the whole governing machinery of Pakistan. One could easily feel the same attitude in the diplomatic officials.

The author is currently engaged with the Educational Academy in Frankfurt, Germany and periodically writes for the Urdu and English Media.