What is the worst thing about Pakistan’s media? 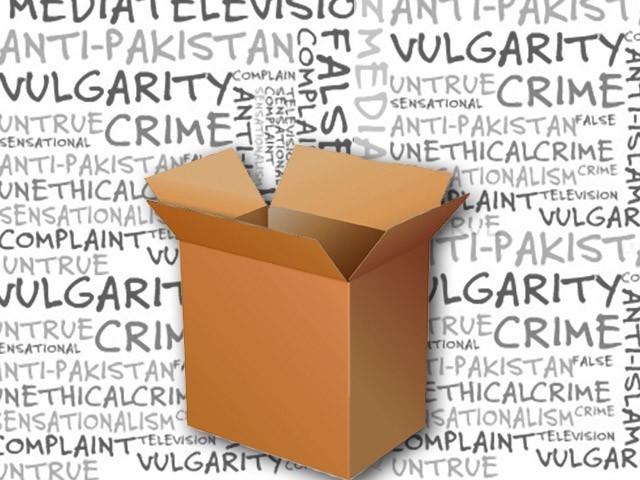 Let us delve into this treasure trove of the Pakistani complainant’s mindset. DESIGN: EMA ANIS

The Pakistan Electronic Media Regulatory Authority (PEMRA) deserves a pat on the back for its bold move towards greater transparency in their online complaints section – they’ve given the public access to the complaint log.

To be frank, a pat on the back for Pemra and a cold shiver down one’s spine is unfortunately the order of the day. Let us delve into this treasure trove of the Pakistani complainant’s mindset.

That is a total of over 800 complaints; again, an encouraging sign for an accountability service that has a very narrow reach and hasn’t been marketed heavily. Leaving aside the Maya Khan phenomenon that accounts for over 400 complaints alone, what is it that Pakistanis with internet access complain about the most?

[Key: Below is a rough estimate, as some complaints overlapped in subject matter, and some have been rounded off]

Against ideology of Islam/Pakistan: 150+ complaints

Yes my friends, the biggest problem in Pakistan’s media – if the complaints are to be believed –  is the channels being anti-Pakistan, anti-Islam or the flip side of that coin: pro-India or pro-Israel.

Promoting Hindu Ideology, Destroying Islamic Identity and Two Nation Theory and ALLAMA IQBAL Status. Making Propaganda against PAK ISI and Armed Forces which are defending Pakistan, Severe Restrictions must be put on these channels to operate to restrain them from harming Pakistan

I would like to lodge a complaint against channels which are playing with the emotions of the common people. It is showing too much Indian content which is directly killing the ideology of Pakistan. They are ignoring all the sacrifices our ancestors gave at the time of Partition, in 1965, 1971 and 1999. It uselessly shows Bollywood filth in all its news bulletins, they should be given warnings or otherwise they should be banned. They are promoting nudity now. It’s seriously looking like if this continues for few more years they will show sex on their channels…long live Pakistan

Fueled by a foul mix of twisted mindset, outright hatred and the arrogance of a simpleton with a fancy red cap, this is the Pakistan we have come to know and love. Ah, the ol’ scum of the Earth, always there when you need them to set the agenda and mindset dead backwards. Classy. This is definitely the media’s biggest problem.

Yes my friends, the second biggest problem in Pakistan’s media is immorality and vulgarity on-screen, which in fact ties directly into, yes you guessed it: being anti-Pakistan and anti-Islam.

I want to register my complaint against AAG TV who is going to on-air a program named “DATE WITH YOUR DREAM GIRL” I strongly condemn this program due to its immorality…please do something to save our society and ideology of Pakistan.

Vulgar Local Content, Drama: “Mora Piya” at 8:00pm on every Friday. This drama is totally based on very shameful and rubbish topic. It is very disgraceful and embarrassing to telecast this drama on the channel of Islamic Republic of Pakistan. As it is very humiliating and not good for the mentality of the youth, please warn the channel plus discontinue this drama.

Maddeningly, if you actually scroll through all the complaints long enough, you almost start to believe (by the sheer volume of complaints) that this IS in fact, one of the biggest critical issues in the media – for a split second you believe that a date with a dream girl or vulgar clothing on-screen actually trumps falsified or unethical reporting (below). Dupattas, it seems, would resolve a lot more problems citizens have with the local media, than say, the sensationalising of news (also below).

Coming in at a distant third is complaints about (mostly) TV news show hosts, and rarely, a complaint against unethical/false reporting. I know a lot of producers, reporters and desk folk on the broadcast front just breathed a big collective sigh of relief there! Let the unethical and false reporting continue! And remember, if there is ever a public outcry, a show host can always be sacrificed to gain back credibility, after all, isn’t that what that stable of pretty faces and megalomaniacal spin doctors are reared for?

This is so far down the list, with so few complaints (most of them confused) it (sadly) doesn’t even merit commenting on. Again, if the complaints are to be used as a gauge for strategising, the average viewer doesn’t know the difference between “vulgar clothing”/“killing ideology of Pakistan”/a “One Eye” graphic and sensationalism. Turn up the nationalist rhetoric for a week and ask your female hosts to don a dupatta for a few episodes and the issue of “sensationalism” should be cured (because now it will be sensationalism, the right way!).

Other (payment of salaries, payment of prizes): 4+ complaints

To the handful who logged in complaints for the above two categories: lagay raho!