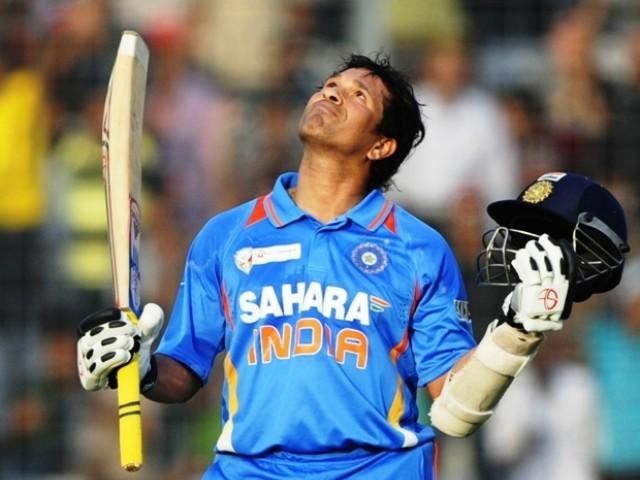 Whether you like the guy or not, you have to admit that he has done stuff that most ordinary mortals can only dream of. PHOTO: AFP

Tendulkar’s achievements are truly remarkable. Whether you like the guy or not, you have to admit that he has done stuff that most ordinary mortals can only dream of. Yes, I am also hinting that Tendulkar is a god, or at least has god-like status. I am sure many cricketers would willingly give their left arm to be half as good as he is, and it would still be a dramatic improvement for them.

There really isn’t a lot left that he can do, unless he wants to get 50 ODI hundreds now that he is just one short – oops did I just give him another reason to not retire?

However I still wish he had not hung around so long to get the hundreth hundred. A year ago, when he finally got his dream of winning a cricket world cup, shortly after getting 99 hundreds, he should have called it a day and he really would have retired as a god. Untarnished, unblemished and untouchable.

If he had done that, we would have been frantically wondering why he did it. Why didn’t he play just one more series, or just one more match? Right? That is all it would have taken! He should have gone for it!

There would have been the magical romance of perfection with that minor flaw that adds to its appeal, that makes fallible humans all that much more admirable than the most impeccable of robots.

However no, he couldn’t handle it, he couldn’t make that decision of picking the right time to decide when it was time to quit, and go while the going was good. The long drawn out, and often painful search for the hundredth ton was not something I enjoyed watching. The constant failure was not how I wanted to remember Tendulkar. At least for me, it proved beyond a doubt that Tendulkar is anything but a god.

Like it or not, when we talk about Tendulkar, the name of Don Bradman always comes up. Maybe because the Don is the only other cricketer to have an achievement that no other batsman got even remotely close to, a Test batting average of 99.94, which would have been an even 100 had he scored four runs in his last innings instead of three; an average that would have been an even hundred had the Don stuck around for a few more Tests to make up for that – or not.

Maybe if Bradman had decided to stick around to try and get the runs for an average of 100 or more, he might have got some more bad scores and actually ended up with less? Who knows? We never will know whether the Don had that fatal flaw in him or not, will we? But we know that about Tendulkar now.

Wimbledon: Has the US dropped the ball?